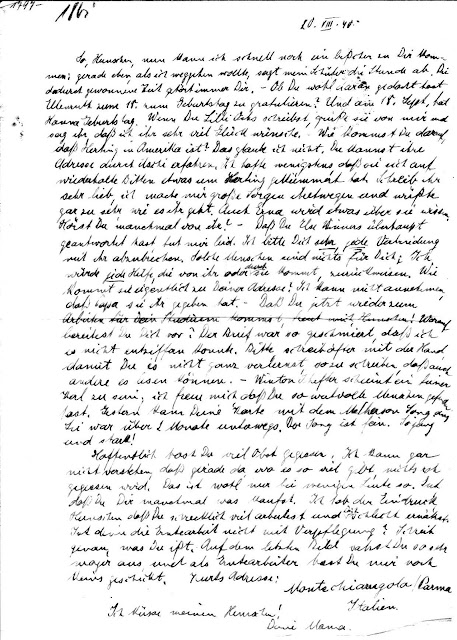 Ok, Hunschenkind, now Mama can be with you for a while, just now as I was ready to leave, my pupil cancelled the lesson for today. As always, the gained time belongs to you. Did you remember to congratulate Ellenruth on her birthday on the 18th? And Hanna’s birthday is on September 18th. When you write to Lilli Ochs, tell her hello from me and say that I wish her lots of happiness.  How come you think that Herting is in America? I do not believe that. You can get her address through Uschi. I hope that she at least, after continued requests, looks after Herting somewhat! Write to her very nicely, that I am very worried about her and would love to know how she is doing. Also Erna should know something about her. Do you hear from her sometimes?

I regret that you have actually answered Else Winns! I beg you to break off any ties with her! People like her are not for you! I would reject any help coming from or through her! How did she actually get your address? I cannot imagine that Papa gave it to her!

That you are now able to work on your studies makes me happy, Hunschenkind. What are you preparing for now? The letter was so messy (she means sloppy handwriting) I could hardly read it. Please write more often in longhand, so you won’t forget to write in a way, that others can read it. Winton Sheffer seems to be a nice guy, I am happy that you have found such valuable people. Yesterday your card with the MCPHERSON song arrived, it was enroute for over two months. The song is great, so young and strong. Hopefully you ate a lot of fruit. I really cannot understand, that right there where they have so much of it, nothing is consumed raw. I guess only a  few people there actually do that. Good, that you can buy something for yourself. I am under the impression, that you are working terribly hard and have poor nutrition. Does the harvesting job include meals? Write in details what you eat! On the last picture you looked very thin, and you have not sent me one, showing you as a harvest worker.

Ella made me chuckle once again with her protective and particular bits of mothering. She reminds him of all the birthdays he should not forget. She is talking again of Herting, and I wish I could tell you who that is. There are a few Uschi's and a few Herting mentions- and we still have not been able to pin down who these folks are. Whoever Herting is- Ella is very concerned about her.

My laugh out loud moment was Ella's tirade on Else Winns. If a relative of Else Winns happens upon this blog, I deeply apologize, but Ella probably knew something. She was not a fan of Opa talking to her. Not sure why, but Ella makes it very clear that she doesn't approve.  I don't know who this is or what became of her- but I do know that she was not a formidable feature in our storyline- so Opa must have listened to his Mama.

Ella wants to hear about what Opa is studying now. Although she would like Opa to write more neatly... there's a trait I learned honestly- messy handwriting! Ella wants to hear more about Opa's friends. The one mentioned here: Winton Sheffer - does actually show up more later- so he's a keeper. Then Ella talks about fruit and food and this line: "I am under the impression, that you are working terribly hard and have poor nutrition." I shouldn't have laughed- but I did. I know she was serious and she was genuinely concerned, but it is oh such a motherly thing to say. She talks about Opa being thin in his pictures.

It just occurred to me that in Opa's memoirs, he talks about how he was a sickly child, and therefore often home with his mother while she was tutoring. I imagine this is the image of Opa that Ella holds in her minds eye- and so she cannot imagine him enduring long hours of physical labor and long hours of studying and long hours of working in the library without sacrificing his health.

The irony is that the Opa I knew- other than his Alzheimer's- was one of the healthiest people I knew. He was strong, fit, and ate well. Ella certainly couldn't have imagined her little sickly city boy would grow up to swim two miles in the ocean every day on family vacations with his grandchildren.

So Ella- who sees Opa as her small child- encourages him to EAT! And to tell her of what he eats- so she can be sure he is getting proper nutrition. Poor Opa... now he has to catalog his meals. Ella will have something to say about whatever he reports- no doubt about it.

We have an address for Kurt- I don't think he's been arrested yet, he seems to be doing OK for now in Italy.
Posted by Sarah Snow at Friday, November 13, 2015