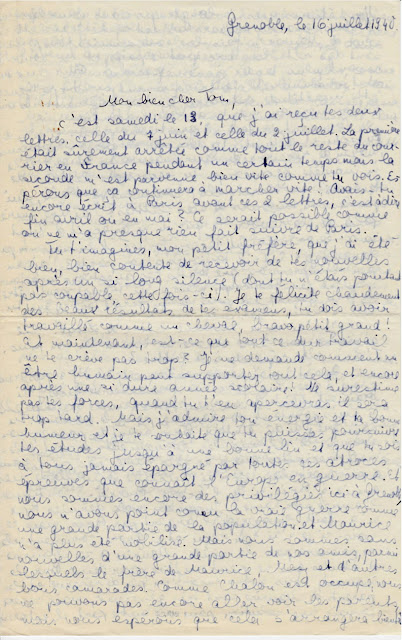 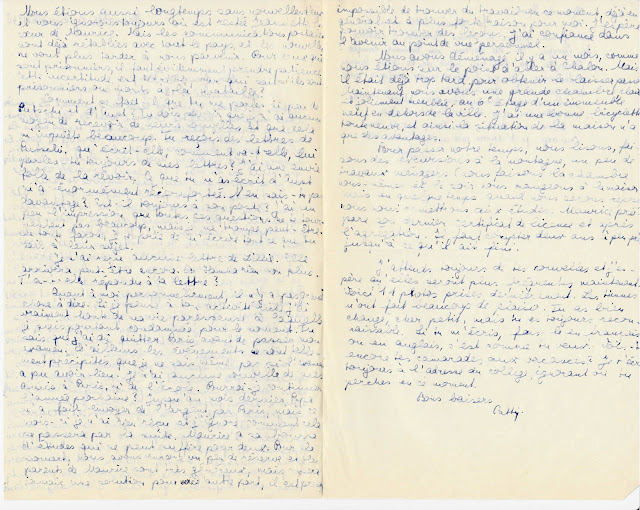 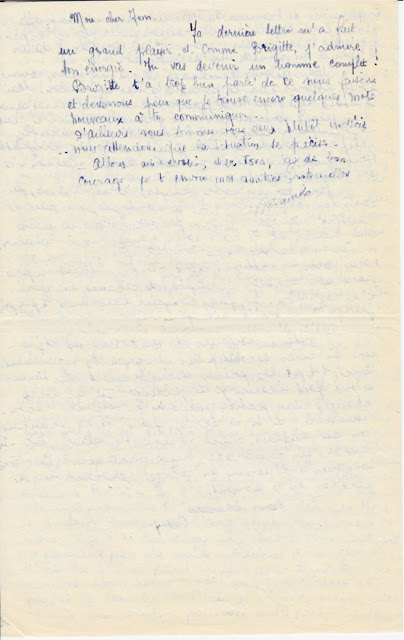 On Saturday the 13 I received two letters, that of 7 June and that of 2 July. The first was certainly stopped, like all other mail in France, for a certain time, but the second arrived very quickly, as you see. Let us hope that it will continue to work quickly! Have you written more to Paris before these two letters, that is to say at the end of April or in May? That would be possible since nothing has been forwarded to me from Paris.

You can imagine, my little brother [fréfrère], that I was very, very happy to receive your news after such a long silence (for which you were not to blame, however, this time). I congratulate you heartily on the beautiful exam results, you must have worked like a horse, bravo little grownup! And  now, has all the hard work worn you out too much? I wonder how a human being can bear all that, all the more after such a hard academic year! Don’t overestimate your strength  ̶  when you realize it, it will be too late. But I admire your energy and good humor and I would like you to be able to pursue your studies until you get to a good place, and that you will on the whole be spared all the terrible trials that Europe is undergoing in wartime. And we are still among the privileged here in Grenoble, we haven’t gone through true war like a large part of the population, and Maurice has not yet been mobilized, But we are without news of most of our friends, among whom are Maurice’s brother Mesy(?) and other good friends. Since Chalon[s] is occupied, we can no longer go see the parents but we hope that this can be arranged soon. We have also been without news of them for a long time and we never know where Jeanette, Maurice’s sister, is staying. But postal communications have already been reestablished throughout the whole country, and news will no longer be late in getting to us. As for those who are in prison, we apparently must have patience. This uncertainty is terrible, for who knows whether they are in prison or dead in battle.

How does it happen that you speak so little of Putschi and Aust(?)? You must know that I have no way of getting news of them and that worries me a lot. You received some letters from Putschi – what does she write, how is she doing, do you always tell her about my letters? I’d really like to see her again. What you told me about Aust made me feel enormously better. Do you know anything more? Is he always at his post? I have the impression that all these questions won’t trouble you greatly, but I may be wrong. In any event, I’d like you to write me anything you know about on these subjects.

I haven’t gotten a letter from Lillie. One may yet arrive. Nothing from Hanna either. Has she answered your letter?

As for me personally, there’s nothing much to say. If I had more of your abundant energy, I would be really ashamed of my lazy life to which I am for the moment condemned. Do you know that I had to leave Paris before passing my exam. Besides, events were so precipitous that I don’t even know if the exam could be given. I have had no news from my friends in Paris, nor from the Ecole. Will I be able to continue next year? Until last month, Papa had sent to me money for Paris, but this month I haven’t received anything and I don’t know how things will go in the future. Maurice has his study grant that cannot suffice for two. For the moment, we still have a bit of a reserve and Maurice’s parents are very generous, but that will never be a solution for me. On the other hand, it is almost impossible to find work at this moment, already in general and all the more for me. I hope to be able to find teaching work. I have confidence in the future from a personal point of view.

We moved a month ago, when we were about to go to Chalons. But it was already too late to get a permit. Now we have a large, light room with nice furniture, on the sixth store of a new building outside the city. I have a fine new bicycle and thus the situation of the house has nothing but advantages.

To pass the time, we read, make trips to the mountain, a bit of housework (we do up the room ourselves) and in the evening we eat at home, but sometimes when we are rested up we go back to our studies. Maurice is preparing his final licensing certificate and after that the agrégation [advanced exam]. He needs almost two more years before he’ll be done.

I always look for news of you and I hope that it will come more frequently now. Here are 11 recent photos. Yours gave me much pleasure. You have definitely changed, my dear little boy, but you are always recognizable. If you write me, make it in French or in English, as you like. Do you still see your vacation friends? I always write you at the college, not knowing where you’re hanging out right now.

Your last letter gave me great pleasure and, like Brigitte, I admire your energy. You are going to become a all-round man! Brigitte has told you very well about what we’re doing and becoming so that I [?need to?] find some new words to tell you.

Moreover, we are both of us still undecided – we’re waiting for the situation to clarify itself.

Till we meet again, dear Tom, keep up your courage, I send you my fraternal affection.

Patti has nothing but questions for Opa, and while she has tried to keep her letter positive and upbeat, she knows that her many questions might reveal her anxiety about her family, her friends, her own life. She does such a good job of pointing out the positive, keeping the letter light and airy. She does all this- and yet the reality is that she is living in a country largely occupied by the Nazis- the very people she and her family have endeavored to escape. The irony is that though every member of her primary family lives in a different country, Opa is the only one not currently under Nazi occupation. How could one even imagine that possibility?!

Patti did not get to finish her exams and has no idea when or how or even if she ever will. Word from August has ceased, as well as his financial support. Patti will need to find a way to support herself and soon. I try to imagine if my parents suddenly were not able to support me in college. This would have been extremely difficult for me, especially if I didn't have access to student loans. However, this is something that many of my friends experienced as their norm, and I think that has been a common thread for many Americans for a while: to work and put themselves through college. This was not the case in Germany. Opa expressed his shock when he saw how college students worked to put themselves through school.

Maybe this cultural difference is why both Patti and Ella (and I'm sure August would say the same if he could write) have been so protective of Opa and how hard he must work to keep himself financially afloat while in school. They caution him not to overwork himself or take on too much. However, I think Opa adapted well to the new culture, and I think the busy-ness helped him keep his mind off the reality that faced his family... and the absolute infuriating inability to do anything about it.

Patti's life is one big question right now. Maurice continues to study and prepare for his schooling, while Patti is to wait and see what she can do to make a living. I don't know how long Patti is going to be able to sit around and do nothing. She is eager for more information from her brother, and about her parents. She sends multiple pictures- hoping for some in return.