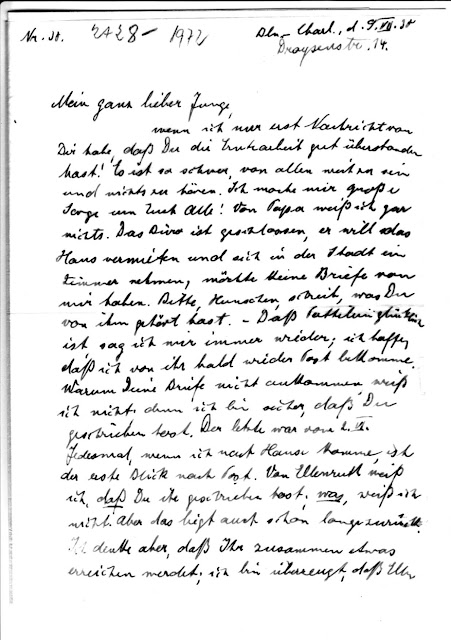 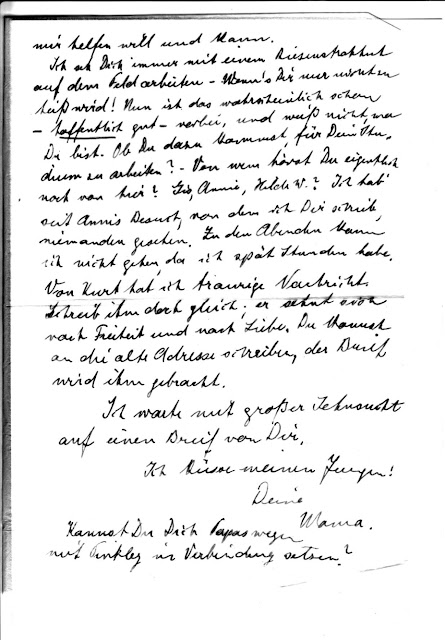 Letter from Ella to Opa
Translation:

If only I had news that you survived the harvest work safely. It is so hard to be so far away from everybody, and not to hear anything. I am very worried about all of you! I know nothing about Papa.

The office has been closed down, he wants to rent the house, and take a room in the city, does not want any letters from me!! Please, Hunschenkind, write to me what you hear about him. I tell myself over and over again, that Pattilein is happy now, I hope to receive mail from her soon. I do not know why your letters do not arrive, but I am sure that you have written. The last one was of June 2nd 1940. Whenever I get home my first glance is for the mail. I know from Ellenruth that you have written to her, but I do not know about what!! But that also has been quite a long time ago. But I do believe that both of you together can achieve something, I am convinced that Ellenruth can and will help me!

I see you with that giant straw hat working in the field!!! Hopefully it will not get too hot for you.

But that is probably finished now, hopefully went well, and I do not know where you are! Do you think you will be able to work for your studies? From whom here do you really hear anything? Gis, Annie, Hilde W.? I have since Anni’s visit, which I wrote to you about, not seen anybody. I cannot go to the “evenings” (Quaker meetings), because I give lessons late in the day. Kurt sent a sad letter. Please write to him right away, he longs for freedom and love. You can write to him using the old address, the letter will be taken to him.

With much longing I await a letter from you.

I kiss my boy
Your Mama

Ella is out of contact with almost everyone, and her main source of information is Opa- the person furthest away. Opa hasn't heard from August since the invasion, and only a couple of times from Patti. The world has gone quiet for Ella, but she knows that it isn't peace, but the deafening sound of censorship.

I keep meaning to mention what is happening with Kurt- Ella has mentioned him a couple of times with concern. Kurt is in Italy in what we might call a "light" concentration camp. He has more freedom of movement than a normal prisoner might- but he is still a prisoner. When I traveled to Berlin to do research and meet people from Opa's life, I had the wonderful opportunity to meet Renate- Opa's cousin. Her father was Ella's brother Kurt. She told his story, here is a snippet of what she told us when we talked about him:

Kurt got an invitation to report to the Gestapo and instead, he dropped everything and escaped to Italy in 1937. Charlotte (Renate's mother) went to Italy on a holiday, met up with Kurt and spent a long time there with him. It was then that she found out she was pregnant. When she had to return home, the couple wasn't sure if they were ever going to see each other again. Charlotte went back home to Berlin. Meanwhile, Kurt was arrested by the Italian police (I'm not sure the year). Renate said that the Italians weren't ant-semitic, they just arrested him because the Germans told them to. They asked Kurt what he did wrong, and he said "I'm Jewish" - they said "yes, but what have you done?" They didn't understand it. So Kurt was in a camp in Italy that wasn't too bad. Many artists were in the camp and allowed to go out and paint. Later the Germans came and made the camp a Nazi camp, and the conditions worsened. I will share more of Kurt's story as we go along in the time- but in this time he is in Italy and the conditions aren't horrible, but he is in fear and is a prisoner.

So Ella encourages Opa to write to Kurt for comfort, encouragement, hope. Ella knew the power of a kind letter from a loved one.

I love that Ella envisions Opa in a wide straw hat working out on the Kansas farms in the sweltering heat. It was probably close to the reality of what he looked like- but it is such a caricature of what a "farmer" looks like. I'm imagining Opa with a wheat stalk between his teeth, his hands in his pockets and overalls on. His mother would have a fit with that picture if he ever had one made!

I hope Opa sent her more pictures, and sent Kurt a letter, and kept living his life in freedom so that those in fear and held prisoners could have joy knowing that someone they loved was safe.
Posted by Sarah Snow at Tuesday, November 03, 2015