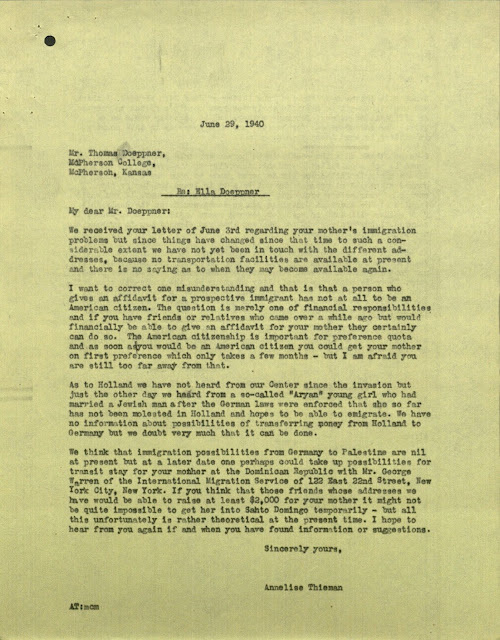 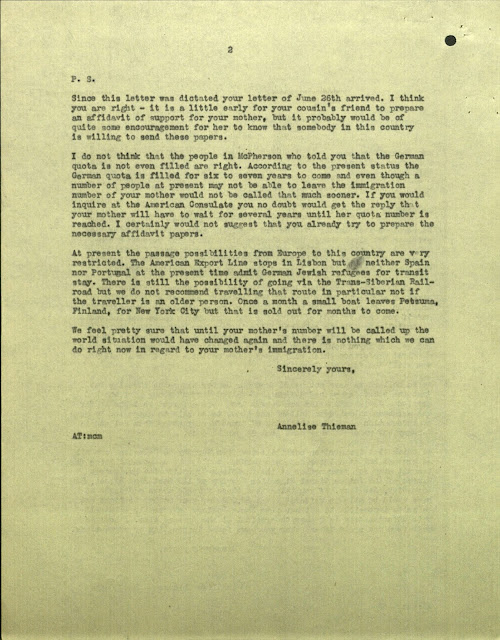 We received your letter of June 3rd regarding your mother's immigration problems but also things have changed since that time to such a considerable extent we have not yet been in touch with the different addresses, because no transportation facilities are available at present and there is no saying as to when they may become available again.

I want to correct one misunderstanding and that is that a person who gives an affidavit for a prospective immigrant has not at all to be an American citizen. The question is merely one of financial responsibilities and if you have friends or relatives who came over a while ago but would financially be able to give an affidavit for your mother they certainly can do so. The American citizenship is important for preference quota and as soon as you would be an American citizen you could get your mother on first preference which only takes a few months - but I am afraid you are still too far away from that.

As to Holland we have not heard from our Center since the invasion but just the other day we heard from a so-called "Aryan" young girl who had married a Jewish man after the German laws were enforced that she so far has not been molested in Holland and hopes to be able to emigrate. We have no information about possibilities of transferring money from Holland to Germany but redoubt very much that it can be done.

We think that immigration possibilities from Germany to Palestine are nil at present but at a later date one perhaps could take up possibilities for transit stay for your mother at the Dominican Republic with Mr. George Warren of the International Migration Service of 122 East 22nd Street, New York City, New York. If you think that those friends whose addresses we have would be able to raise at least $2,000 for your mother it might not be quite impossible to get her into Santo Domingo temporarily - but all this unfortunately is rather theoretical at the present time. I hope to hear from you again if and when you have found information or suggestions.

P.S. Since this letter was dictated your letter of June 26th arrived. I think you are right- it is a little early for your cousin's friend to prepare a affidavit of support for your mother, but it probably would be of quite some encouragement for her to know that somebody in this country is willing to send these papers.

I do not think that the people in McPherson who told you that the German quota is not even filled are right. According to the present status the German quota is filled for sex to seven years to come and even though a number of people at present may not be able to leave the immigration number of your mother would not be called that much sooner. If you would inquire at the American Consulate you no doubt would get the reply that your mother will have to wait for several years until her quota number is reached. I certainly would not suggest that you already try to prepare the necessary affidavit papers.

At present the passage possibilities from Europe to this country are very restricted. The American Export Line stops in Lisbon but neither Spain nor Portugal at the present time admit German Jewish refugees for transit stay. There is still the possibility of going via the Trans-Siberian Railroad but we do not recommend traveling that route in particular not is the traveller is an older person. Once a month a small boat leaves Petsuma, Finland, for New York City but that is sold out for months to come.

We feel pretty sure that until your mother's number will be called up the world situation would have changed again and there is nothing which we can do right now in regard to your mother's immigration.

This is the second letter like this that Opa has gotten. This letter is even more final with the last line reading: "there is nothing which we can do right now in regard to your mother's immigration."

When Anneliese starts talking about some temporary stay in the Dominican Republic, I knew she was stretching for ways. You can tell that the American Friends Service Committee have literally searched every route and loophole. They know the exit of one tiny boat from Finland, they even have the Siberian railroad as a not-so-good possibility. The thing that is keeping Ella stuck in Berlin: the quota system. She is years in line. Opa's false hope that perhaps the line was going by faster because people couldn't get the required affidavits gets squashed. Anneliese says that even if people aren't getting out, it still won't get Ella out sooner.

I do remember reading somewhere that the US actually didn't get their "quota" filled each year, and it was because of how impossible it was to get out of Europe and into the United States.

What do you do with a letter like this? What did Opa do? In his autobiography he mentions having to write his mother a letter when he finds out there is no hope of getting her out of Germany. Is this when he writes that letter? How on earth do you write a letter like that to your mother?! How infinitely frustrating it must have been for the AFSC folks and for Opa. They were powerless. They fought in every way they knew how and yet they were rendered useless by a number.

I think about Opa in a small town in Kansas, cushioned from the war by thousands of miles of dirt and oblivious people. He was as safe as he possibly could be. Yet, how could he feel good? How could he feel the tips of his freedom if he knew that every other member of his family were in caged fear of the Nazis? And how frustrating that his freedom meant nothing, it could not be shared or transferred, he gained no power in it. It was an isolated freedom.

All he could do was the next day's work. He had to live his freedom that no one else in his family had. He had to keep trying so that just in case the realm of possibilities opened even an inch- he might be ready.