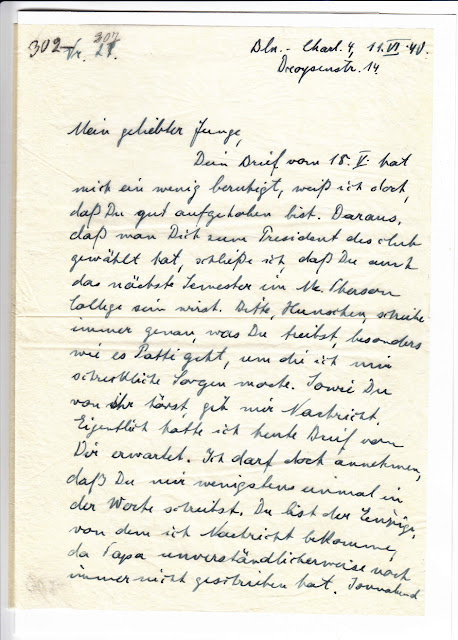 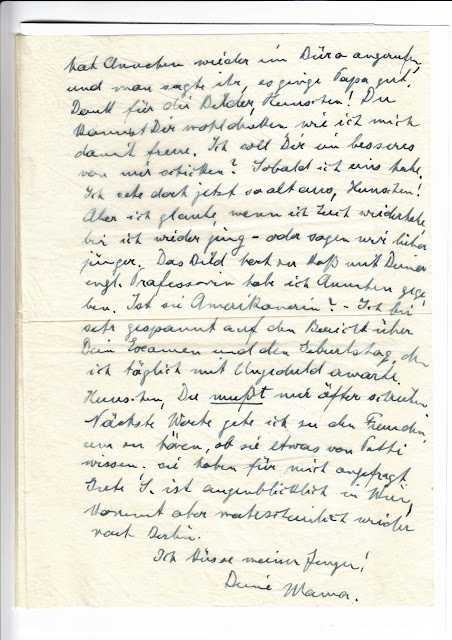 Your letter of May 18th calmed me down a bit, because now I know you are taken care of. From the fact that you were elected president of your club, I can indicate that you will be at McPherson college for the next semester.  Please, Henschenchild, write in details what you are doing, especially how Patti is, I am so terribly worried about her. As soon as you hear from her, contact me. I actually expected a letter from you today. I hope I can assume that you write at least once a week. You are the only one I hear from, since Papa not understandably still has not written. On Saturday Ann’chen called his office again and was told, Papa is doing well. Thank you for the pictures, henschenchild. You can imagine how much joy they give me!

You want me to send you a better one of me? As soon as I have one, but I look so old now! But I know when I am with both of you again, I will be young again, or should I say younger! The picture of you on horseback, with your English Professor, I gave to Ann’chen. Is she an American? I am curiously waiting for your report about the exams and your birthday, every day. Henschenchild you have to write to me more often!!!!! Next week I will visit a girlfriend to hear if they know something about Patti, they made some inquiries for me. Grete S now is in Vienna, but will probably return to Berlin.

I kiss my boy
Mama

You know the old saying "Call your mother"- the older saying here is "write your mother!!" (If you say it in a New York accent it helps).

Opa has calmed his mother with news of his being elected to be president of the international relations club. This tells her two things: that he will be in school next year, and that he is accepted among his peers. I know she must have been proud of his efforts to do all the good he could.

Ella is desperate for mail. Her sources of mail have dried up- Patti in Nazi-occupied France is unable to write, and August in Nazi-occupied Holland seems to be unable. Ella seems to think August should be able to write. It just occurred to me that it is kind of interesting that August was writing to Ella regularly. I just wonder what the dynamics were for Ella and Emma. Perhaps they were very civil and cordial. Renate, Ella's niece, said that she heard that the family was sort of divided by this divorce and August's marriage to Emma, but that the war brought everyone back together. They put their differences aside.

I hope Opa is writing Ella often. I know she puts a lot of pressure on him and he is not idle- but she's so alone and isolated. I'm grateful that she has Ann'chen to keep her connected to news on August, and likely other benefits that come from having someone who is not Jewish looking after you.

The statement that Ella said about her aging - how a new picture would show how old she had gotten- that broke my heart. I bet that she was completely honest in this. The she said that she would be young again when she saw her children again. Sigh.

Before I wrap this up I have to pick out the funny  and lighthearted piece of this letter. Opa sent a picture of himself on horseback with a professor. I don't know why but my first mental image when I read that was of Opa and this professor sitting on perfectly groomed show horses like in some British polo magazine. That made me laugh! Then I realized- this is Kansas. These are farming folk- and the picture was probably far more rodeo than polo. Hahaha!

Now we must hope that Ella will have a chance to grow young again.
Posted by Sarah Snow at Friday, October 02, 2015