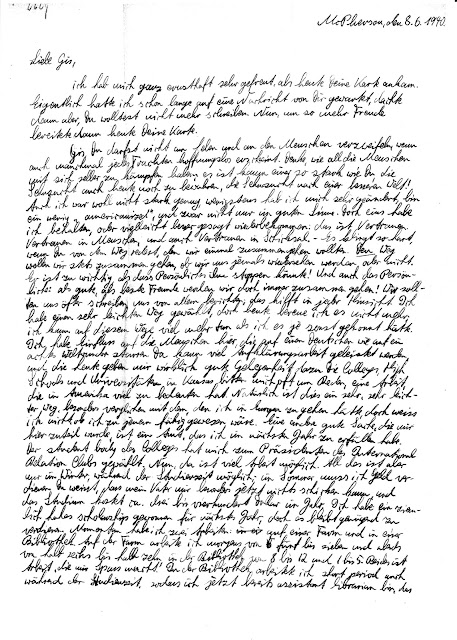 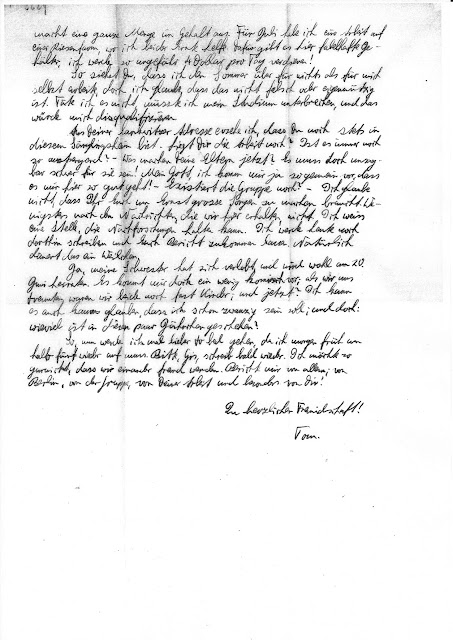 Translation:
McPherson, 6/8/1940
Dear Gis,
I was really seriously overjoyed when your card arrived today. Actually, I had been waiting for some news from you for a long time, but I thought you didn’t want to write anymore. Well, that’s all the more joy your card brought today.
Gis, you can’t despair about life and humanity, even if sometimes every dreadful thing seems hopeless. Think how all people have to fight with themselves; there is hardly anyone as strong as you, who even today still haven’t lost your aspiration, the aspiration to a better world! Even I wasn’t strong enough, at least I’ve changed a lot, I’m a bit “Americanized” and certainly not just in a good sense. But there’s one thing I’ve held onto, or I should say, gotten back: trust. Trust in humanity, and also trust in fate. It seems so hard, when you speak of the way that we once wanted to go together. That way we still want to go together, whether we ever see each other again or not. It’s too important for personal stuff to be able to stop that! And also, the personal: as good—best—friends we will always go together! We should write each other more often, update each other on everything; that helps in every respect. I chose a very easy way, but today I don’t regret it anymore; I can do far more on this path than I ever could have done otherwise. I have influence on people here, who look at a German as if he’s the eighth wonder of the world. So a lot of work of raising awareness can be done, and the people give me really good opportunities for that. The colleges, high schools and universities in Kansas often ask me to speak, a job which in America means a lot. Naturally this is a much, much easier way, especially compared to the one I would have gone down in Europe, but I just don’t know if I would have been capable of that. Another good thing that’s available to me here is an office I’ll be filling next year. The student body of the college elected me president of the International Relations Club. Now, that’s a lot of potential work to do! All that is only possible in the winter, during the school year, though; in the summer, I have to earn money. You know that my father can’t send me anything, especially now, and studying costs about three to four hundred dollars a year.  I won a relatively big scholarship for this next year, but there’s still plenty I have to earn. At the moment I have two jobs: on a farm and at a library. On the farm I work mornings from 5 to 7 and evenings from 5:30 to 9:30, and at the library from 8-12 and 1-5.  Both kinds of work are fun for me! At the library I work a “short period” during the school year, too, so that I’m already an assistant librarian; that makes a big difference in salary. For July I have a job on a huge farm, where I help with the harvesting. For that they pay a wonderful salary here, I’ll make something like four dollars a day!
So you see that I’m working this summer for nothing more than myself, but I don’t think that’s wrong or selfish. If I didn't do it I would have to interrupt my studies, and that would disqualify me.
From your return address I see you are still in this children’s home. Is there still work for you there? Is it still just as stressful? What are your parents doing now? It must be unspeakably hard for them! My God, I now feel so mean that everything is going so good for me here. Does the group still exist? I don’t believe that you all have to worry too much. At least not according to the news we get here. I know a place where a person can make inquiries. I’ll write to them again today and have a report sent to you. Of course it will take a little while.
Yes, my sister got engaged, and is getting married on June 20. It does seem a little strange to me; the last time I saw her, we were both practically children, and now? I can also hardly believe that I’m almost 20, and even so: how much has happened in these few years!
Well, now I’d better be getting to bed, since I have to get up tomorrow morning at 4:30.  Please, Gis, write again soon. I don’t want us to become strangers to each other. Give me an update on everything: on Berlin, on the group, on your work, and especially on you!
In sincere friendship!

Opa and Gisela's letters are so unique. I wish we had Gisela's side. I read this letter a few times, and I think there is some dynamic happening here that we miss because we don't have Gisela and Anni's letters. (Or Opa's letters to Anni) Remember that Anni and Gisela are sisters and there was a little bit of a love triangle here. Opa loved Anni, Anni loved Werner (who died in the war), and Gisela loved Opa. The hard part is that Opa sincerely cared for Gisela and wants their friendship to endure. He says that their friendship is too important and their common goals (I'm going to simplify and say "world peace") should be still their shared vision and place of camaraderie. Gisela said she and Opa took long walks together often- so I'm guessing they talked a lot about how they saw the world, and how they wanted to do good things and make peace with what gifts they had.

It sounds like Gisela is starting to despair with the evil that confronts her in Germany. She wants to believe and hope for a world that is better and beautiful, but the things around her are stamping out her hopeful spirit. We can't blame her. We don't know what her daily life confronts her with at the children's home, but we do know her parents faced constant interrogation from the Nazis and constant surveillance.

Opa is starting to deal with his survivor's guilt a little bit, recognizing that while he has it easy in comparison to the rest of his friends and family, he is able to do more good than he could have had he stayed in Germany. There isn't a measurable way that Opa can prove that, as we have no idea what would have happened to him had he stayed in Germany. The most probable outcome would have been his involuntary draft into the army or some form of punishment if he had not willingly joined. I can't imagine what his life would have been like if he had not been able to leave. I honestly think the best case scenario might have been death. Maybe I'm being too dramatic- but if he were forced to join the Nazi army- what terrors would he have faced? If he refused?

Instead he is able to spend hours in the library, mornings and evenings on the farm, and the spring and fall in the classroom. There is no Nazi official at his door, no army draft letter, no skirmishes on the streets to avoid. He knows he has infinite more luck than most of his friends and his family. He makes his peace by being the voice of the rational and kind German wherever he will be heard. I didn't realize he was offered the opportunity to speak throughout the area. I know he had opportunities in the college, but I didn't realize he had outside engagements. Opa masters the humble-brag as he's listing all his wonderful endeavors while also pretending to be humble about it. Ha.

Opa feels himself being Americanized- but he tells Gisela that he has gained something valuable: the ability to trust. I think this is another way to say hope in humanity. Opa had been on the receiving end of so much good and kindness that he got a little bit of his trust in people back. He tries to give some of that hope to Gisela, who is on the other end of that spectrum- seeing so much anger, fear, and hatred that her hope in humanity is waning. Opa offers her hope and promises to continue trying to make a better world with her.

It makes me wonder about those times when our space in invaded by devastation and despair. No matter where we look- all we see is the bad and evil- we lose hope. It would be so hard to imagine that somewhere, even just over the next bridge, could be hope and kindness. Kindness anywhere is an opportunity for hope.