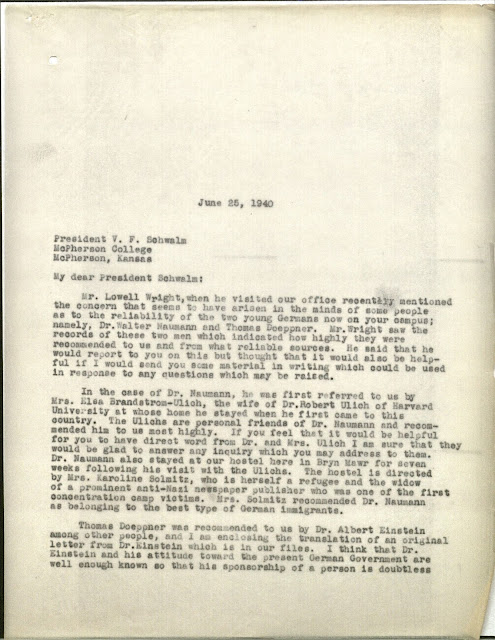 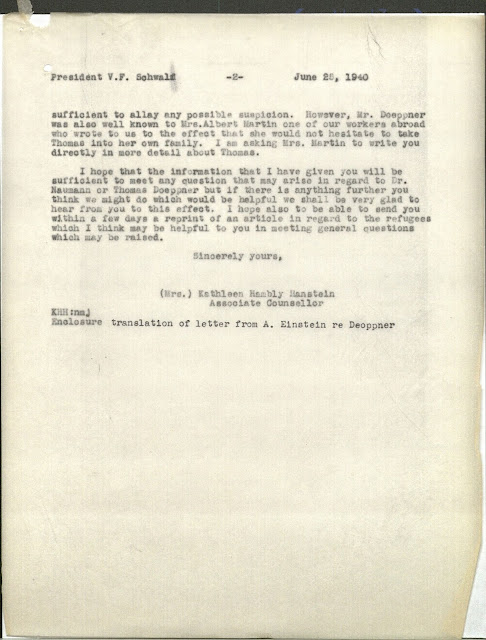 Mr. Lowell Wright, when he visited our office recently mentioned the concern that seems to have arisen in the minds of some people as to the reliability of the two young Germans now on your campus; namely, Dr. Walter Naumann and Thomas Doeppner. Mr. Wright saw the records of these two men which indicated how highly they were recommended to us and from what reliable sources. He said that he would report to you on this but thought that it would also be helpful if I would send you some material in writing which could be used in response to any questions which may be raised.

In the case of Dr. Naumann, he was first referred to us by Mrs. Elsa Brandstrom-Ulich, the wife of Dr. Robert Ulich of Harvard University at whose home he stayed when he first came to this country. The Ulichs are personal friends of Dr. Naumann and recommended him to us most highly. If you feel that it would be helpful for you to have direct word from Dr. and Mrs. Ulich I am sure that they would be glad to answer any inquiry which you may address to them. Dr. Naumann also stayed at our hostel here in Bryn Mawr for seven weeks following his visit with the Ulichs. The hostel is directed by Mrs. Karoline Solmitz, who is herself a refugee and the widow of a prominent anti-Nazi newspaper publisher who was one of the first concentration camp victims. Mrs. Solmitz recommended Dr. Naumann as belonging to the best type of German immigrants.

Thomas Doeppner was recommended to us by Dr. Albert Einstein among other people, and  I am enclosing the translation of an original letter from Dr. Einstein which is in our files. I think that Dr. Einstein and his attitude toward the present German Government are well enough known so that his sponsorship of a person is doubtless sufficient to allay any possible suspicion. However, Mr. Doeppner was also well known to Mrs. Albert Martin one of our workers abroad who wrote to us to the effect that she would not hesitate to take Thomas into her own family. I am asking Mrs. Martin to write you directly in more detail about Thomas.

I hope that the information that I have given you will be sufficient to meet any question that may arise in regard to Dr. Naumann or Thomas Doeppner but if there is anything further you think we might do which would be helpful we shall be very glad to hear from you to this effect. I hope also to be able to send you within a few days a reprint of an article in regard to the refugees which I think may be helpful to you in meeting general questions which may be raised. 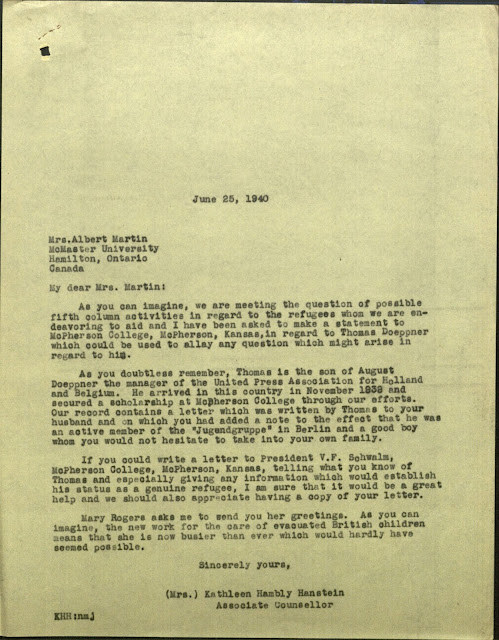 As you can imagine, we are seeing the question of possible fifth column activities in regard to the refugees whom we are endeavoring to aid and I have been asked to make a statement to McPherson College, McPherson, Kansas, in regard to Thomas Doeppner which could be used to allay any question which might arise in regard to him.

As you doubtless remember, Thomas is the son of August Doeppner the manager of the United Press Association for Holland and Belgium. He arrived in this country in November 1939 ad secured a scholarship at McPherson College through our efforts. Our record contains a letter which was written by Thomas to your husband and on which you had added a note to the effect that he was an active member of the "Jugendgruppe" in Berlin and a good boy whom you would not hesitate to take into your own family.

If you could write a letter to President V.F. Schwalm, McPherson College, McPherson, Kansas, telling what you know of Thomas and especially giving any information which would establish his status as a genuine refugee, I am sure that it would be a great help and we should also appreciate having a copy of your letter.

Mary Rogers asks me to send you her greetings. As you can imagine, the new work for the care of evacuated British children means that she is now busier than ever which could hardly have seemed possible. 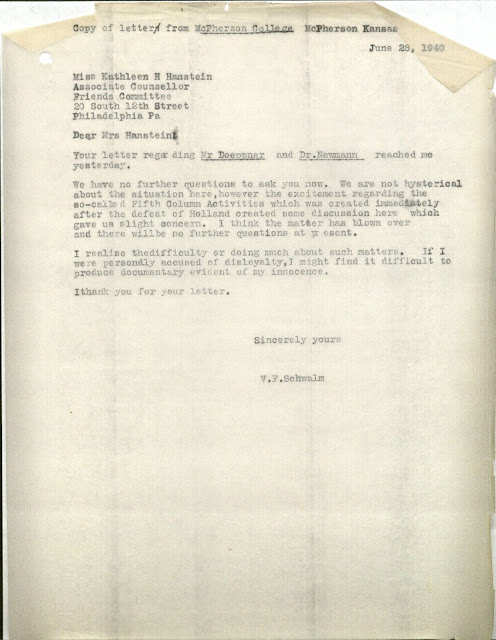 Your letter regarding Mr. Doeppner and Dr. Naumann reached me yesterday.

We have no further questions to ask you now. We are not hysterical about the situation here, however the excitement regarding the so-called Fifth Column Activities which was created immediately after the defeat of Holland created some discussion here which gave us slight concern. I think the matter has blown over and there will be no further questions at present.

I realize the difficulty or doing much about such matters. If I were personally accused of disloyalty, I might find it difficult to produce documentary evident of my innocence.

I thank you your letter.

The letters leading up to V.F. Schwalm's response are carefully constructed letters of people who are walking on eggshells. They are hoping that the freedom of these refugees that they have fought hard for won't slip away with one conspiracy theory. It is understandable that people might have suspicions after Holland and France's quick defeat. It is understandable that the folks at the American Friends Service Committee (AFSC) are scrambling to address those suspicions. However, if the community listened only to fear, then how would Opa and Dr. Naumann really prove themselves "innocent?"

In his response to these careful letters, V.F. Schwalm does the equivalent of dropping the mic. I love it. He basically says: we're not worried, those that were- are over it, and if I had to prove my innocence in some cracked up plot- it'd be a challenge. This ain't my first rodeo. We're not concerned- thanks and goodbye. Mic Drop.

I love V.F. Schwalm. I also love that these two refugees became such an integral part of the community at McPherson that there was not a real concern about their loyalties. I'm sure that in other places and other refugees, they got a lot more grief when these fifth column theories came out. Opa's community at McPherson did not succumb to the fear, but rather continued to embrace his presence in their community.