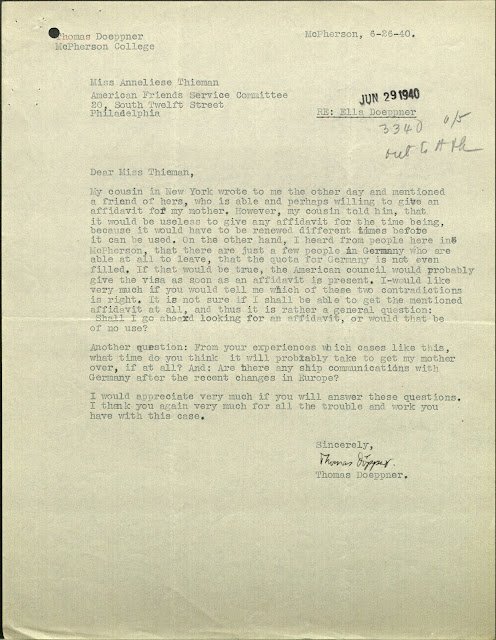 Letter from Opa to Miss Thieman of AFSC

My cousin in New York wrote to me the other day and mentioned a friend of hers, who is able and perhaps willing to give an affidavit for my mother. However, my cousin told hi, that it would be useless to give any affidavit for the time being, because it would have to be renewed different times before it can be used. On the other hand, I heard from people here in McPherson, that there are just a few people in Germany who are able at all to leave, that the quota for Germany is not even filled. If that would be true, the American council would probably give the visa as soon as an affidavit is present. I would like very much if you would tell me which of these two contradictions is right. It is not sure if I shall be able to get the mentioned affidavit at all, and thus it is rather a general question: Shall I go ahead looking for an affidavit, or would that be of no use?

Another question: From your experiences which cases like this, what time do you think it will probably take to get my mother over, if at all? And: are there any ship communications with Germany after the recent changes in Europe?

I would appreciate very much if you will answer these questions. I thank you again very much for all the trouble and work you have with this case.

Opa wants to know: does his mother have a chance of coming to America? He has some possible leads, he has heard some positive rumors that there might be room on the list even if Ella is far down on the numbers. He's basically asking Anneliese Thieman: is there hope?

He probably sent this letter with hope and dreading the response. He asks the question clearly, and he might not get the clear response he wants.