This is Jason again! I have admitted to Sarah many times the ways in which my high school history classes have come alive through this project and how I am mindful of just how little I paid attention in these classes (Sorry, Mr. Wallace). So when a reference was made to fifth column activities, I realized it was something I had probably learned, but was not coming to my mind. So I will give a little background on how this term came about and then the reality of this issue as it became relevant for Opa.
Wikipedia defines it generally as “any group of people who undermine a larger group—such as a nation or a besieged city—from within, usually in favor of an enemy group or nation.” The article goes on to say the term came from the Spanish Civil War when Emilio Mola, a Nationalist General, told a journalist in 1936 that as his four columns of troops approached Madrid, a "fifth column" of supporters inside the city would support him and undermine the Republican Government from within. The term was then widely used in Spain. Ernest Hemingway used it as the title of his only play, which he wrote in Madrid while the city was being bombarded, and published in 1938 in his book The Fifth Column and the First Forty-Nine Stories. 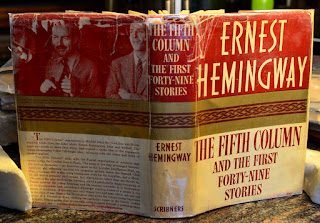 It became a tactic in the military world and was suspected to be used particularly when Holland and France were taken so quickly by Germany in 1940. Many credited it to the help of Nazi sympathizers in those countries. This idea was escalated by a series of photos in LIFE Magazine on June 17, 1940 (pictured here, with a transcription of the text below so you can read it). Following LIFE, TIME and The New York Times also ran articles about Fifth Column activities becoming an issue.
It is no coincidence that in late June, there are rumblings about both Tom (Opa) and Professor Naumann and whether they could be participants in this. It makes me wonder how many refugee students were experiencing this and how many were actually adversely affected because of these fears. As I look at other refugees files, I will be keeping an eye out for this and might report back more. I would also be interested to see if any other college presidents took the time and energy to stand up for their teachers and students amidst this scrutiny. 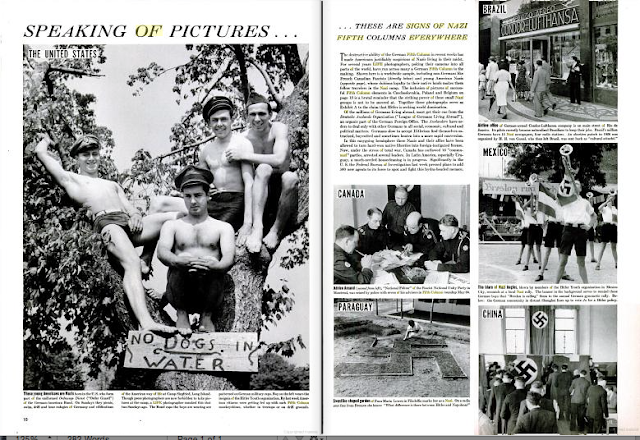 Speaking of Pictures...These are signs of Nazi Fifth Columns Everywhere

The destructive ability of the German Fifth Columns in recent weeks has made Americans justifiably suspicious of Nazis living in their midst. For several years LIFE photographers, poking their cameras into all parts of the world, have run across many a German Fifth Column in the making. Shown here is a worldwide sample, including non-Germans like French Canadian Fascists (directly below) and young American Nazis (opposite page), whose dubious loyalty to their native lands makes them fellow travelers in the Nazi camp. The inclusion of pictures of successful Fifth Column elements in Czechoslovakia. Poland and Belgium on page 13 is a brutal reminder that the striking power of these small Nazi groups is not to be sneered at. Together these photographs serve as Exhibit A to the claim that Hitler is seeking world domination.
Of the millions of Germans living abroad, most get their cue from the Deutsche Auslands Organisation (“League of Germans Living Abroad”), an organic part of the German Foreign Office. The Auslanders have orders to deal only with other Germans in all social, economic, cultural and political matters. Germans slow to accept Hitlerism find themselves ostracized, boycotted and sometimes beaten into a more rapid conversion.
In this easygoing hemisphere these Nazis and their allies have been allowed to turn hard-won native liberties into foreign-instigated license. Now, under the stress of total war, Canada has outlawed 16 “communazi” parties, arrested several leaders. In Latin America, especially Uruguay, a much-needed housecleaning is in progress. Significantly in the U.S. the Federal Bureau of Investigation last week pressed plans to add 500 new agents to its force to spot and fight this hydra-headed menace.
Posted by Sarah Snow at Wednesday, October 07, 2015