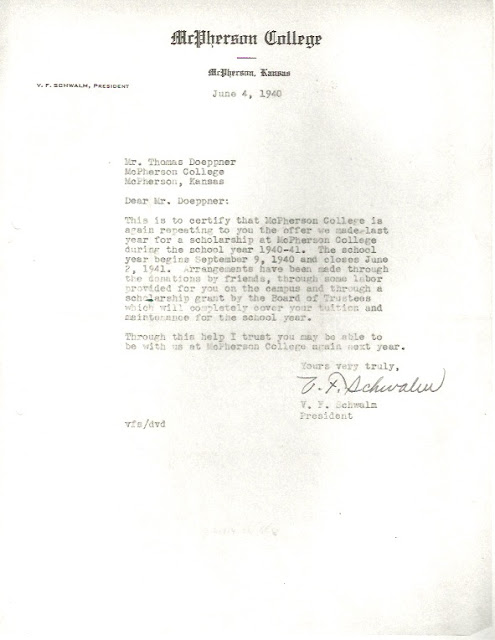 Letter from V.F. Schwalm (President of McPherson College) to Opa

This is to certify that McPherson College is again repeating to you the offer we made lsat year for a scholarship at McPherson College during the school year 1940-4. The school year begins September 9, 1940 and closes June 2, 1941. Arrangements have been made through the donations by friends, through some labor provided for you on the campus and through a scholarship grant by the Board of Trustees which will completely cover your tuition and maintenance for the school year.

Through this help I trust you may be able to be with us at McPherson College again next year.

This is the letter Opa needed to send to the immigration folks to prove that he was admitted and financially covered for the following school year. The main goal is for Opa to be able to switch his soon-to-expire visitor's visa into a not-so-soon-expiring Student Visa (which would also allow him to work more lucrative jobs than the harvest farm gigs he's signed up for). 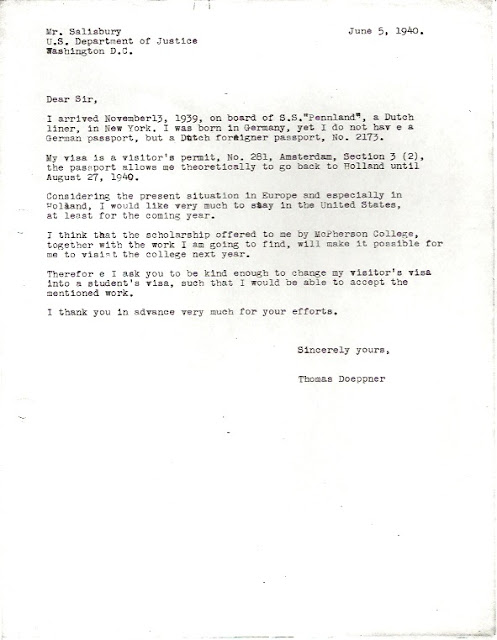 Letter from Opa to Mr. Salisbury of the INS

Considering the present situation in Europe and especially in Holland, I would like very much to stay in the United States, at least for the coming year.

I think that the scholarship offered to me by McPherson College, together with the work I am going to find, will make it possible for me to visit the college next year.

Therefore I ask you to be kind enough to change my visitor's visa into a student's visa, such that I would be able to accept the mentioned work.

I thank you in advance very much your efforts.

This is Opa's official letter to the INS to request his visa be renewed and changed to a student visa. He mentions that he was born in Germany but does not have a German passport. This rings true with my memory of him claiming to have destroyed his German passport because he wanted no connection or tangible tie to Nazi Germany. 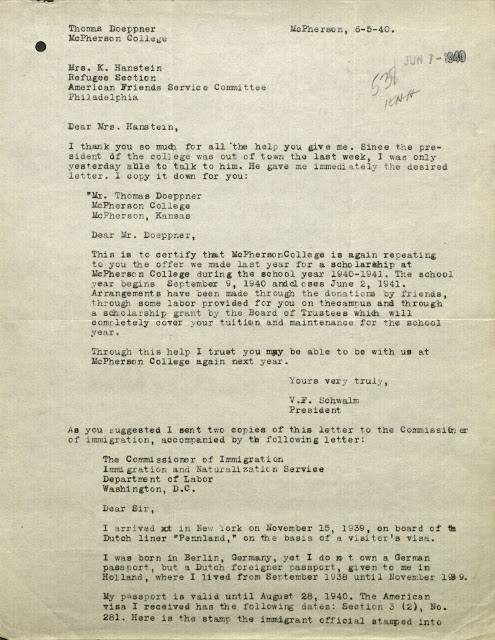 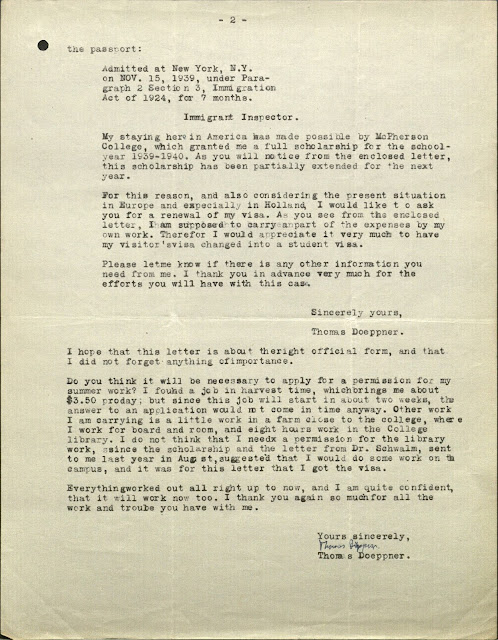 I thank you so much for all the help you give me. Since the president of the college was out of town last week, I was only yesterday able to talk to him. He gave me immediately the desired letter. I copy it down for you:

Here he types out VF Schwalm's letter - the first letter in this blog.

As you suggested I sent two copies of this letter to the Commissioner of immigration, accompanied by the following letter:

Here he types out a different version of the letter we have above...

The Commissioner of Immigration Immigration and Naturalization ServiceDepartment of LaborWashington, D.C.

I arrived in New York on November 15, 1939, on board of Dutch liner "Pennland," on the on the basis of a visitor's visa.

I was born in Berlin, Germany, yet I do not own a German passport, but a Dutch foreigner passport, given to me in Holland, where I lived from September 1938 until November 1939.

My staying here in America was made possible by McPherson College, which granted me a full scholarship for the school year 1939-1940. As you will notice from the enclosed letter, this scholarship has been partially extended for the next year.

For this reason, and also considering the present situation in Europe and especially in Holland, I would like to ask you for a renewal of my visa. As you see from the enclosed letter, I am supposed to carry a part of the expenses by my own work. Therefore I would appreciate it very much to have my visitor's visa changed into a student visa.

Please let me know if there is any other information you need from me. I thank you in advance very much for the efforts you will have with this case.

I hope that this letter is about the right official form, and that I did not forget anything of importance.

Do you think that it will be necessary to apply for a permission for my summer work? I found a job in harvest time, which brings me about $3.50 per day; but since this job will start in about two weeks, the answer to an application would not come in time anyway. Other work I am carrying is a little work in a farm close to the college, where I work for board and room, and eight hours work in the College Library. I do not think that I need a permission for the library work, since the scholarship and the letter from Dr. Schwalm, sent to me last year in August, suggested that I would do some work on the campus, and it was for this letter that I got the visa.

Everything worked out all right up to now, and I am quite confident that it will work now too. I thank you again so much for all the work and trouble you have with me.

So this letter is basically Opa reporting to Mrs. Hanstein about his communication with the INS. It's interesting that he quotes a different version of his letter to the INS- the copy we have is from his case file, so he must have edited and sent that copy instead. I think he was write to edit. This letter from Opa seems a little rushed and you can kind of tell his first language is not English. You may not notice it as much as I do- but Opa prided himself on his command of the English language- this letter would never have made it out of the house in his later years. 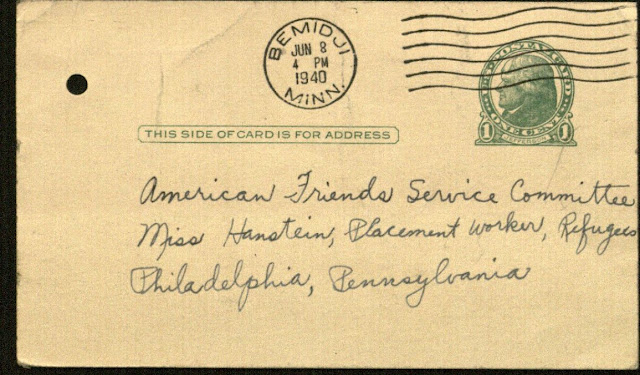 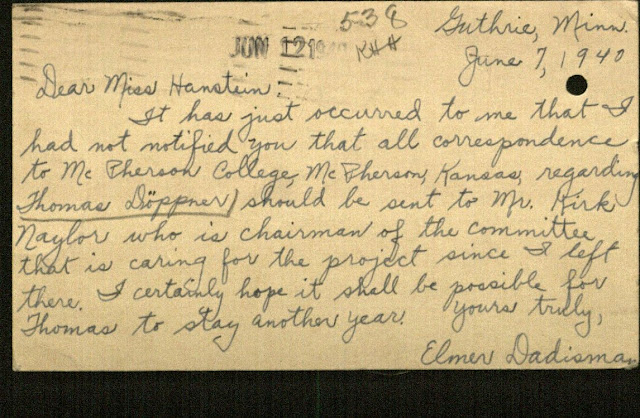 It has just occurred to me that I had not notified you that all correspondence to McPherson College, McPherson, Kansas, regarding Thomas Döppner should be sent to Mr. Kirk Naylor who is chairman of the committee that is caring for the project since I left there. I certainly hope it shall be possible for Thomas to stay another year.

This letter is not directly related to the others except that it was written on the same day and shows that even students who had moved away from McPherson were still invested in Opa's well-being.

Now time will only tell if the request for a student visa is approved. This letter of request comes in the same month that Opa's visitors visa expires. He's definitely on a time crunch. By the end of the month, if he doesn't have approval- what will happen? Ella and August are both probably very aware that this is the month that his visa expired- and they are likely both wondering if Opa is going to be allowed to stay in the United States. Opa's enduring optimism stands though - he states in his letter to Mrs. Hanstein: "Everything worked out all right up to now, and I am quite confident that it will work now too."