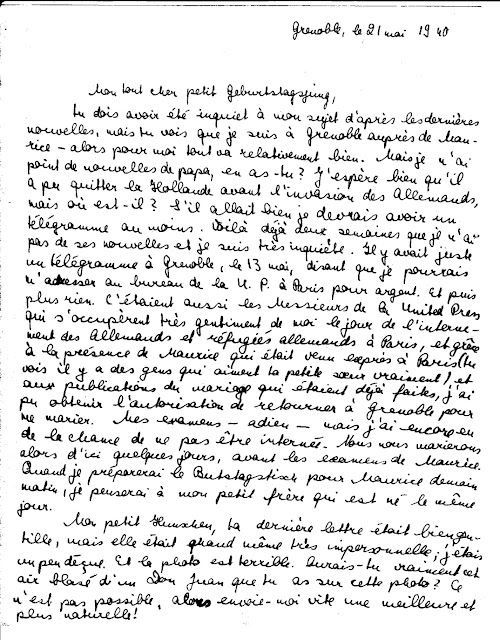 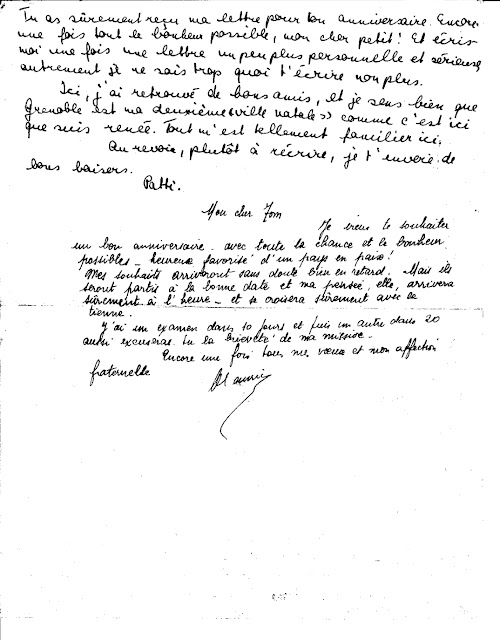 Letter from Patti (and Maurice) to Opa

You must have been worried about me after the recent news stories, but you see that I am in Grenoble with Maurice – so for me everything is going relatively well. But I haven’t received any news from Papa, have you? I really hope he was able to leave Holland before the German invasion, but where is he now? If he were okay, I should have at least received a telegram. Two weeks have passed since I’ve gotten mail from him, and I am very worried. I just received a telegram in Grenoble May 13th saying I could contact the UP office in Paris for money. And then nothing more. It was also the men at the United Press who were so kind as to take care of me the day of the internment of the Germans and German refugees in Paris, and thanks to the presence of Maurice who came especially to Paris for that purpose (you see there are people who really love your little sister), and thanks also to the marriage documents that were already prepared, I was able to obtain authorization to return to Grenoble to get married. My exams – forget it, adieu – but I was still lucky in that I was not interned. We will marry within a few days, before Maurice’s exams. When I will prepare the “Butstagstisch” =Bootdaytable (childish corruption of Birthday table) for Maurice tomorrow morning, I will think of my little brother who was born on exactly the same day.

My little Puppydog, your last letter was really nice, but it was nevertheless very impersonal; I was a little disappointed. And the photo is terrible. Would you really have that blasé look of a Don Juan that’s on that photo? That’s just not possible, so send me a better one with a more normal expression as soon as you can?

You must have received my letter for your birthday. Once more, I wish you all possible happiness, my dear little one! And write me a more personal and serious letter, or I won’t know what to write you back.

Here, I have found good friends, and I really feel that Grenoble is my second “native city”, since it’s here that I was reborn.  Everything is so familiar here.

Goodbye, or rather ‘til we write again, I am sending you sweet kisses.  Patti

My dear Tom,
I am writing to wish you a happy birthday – and all the possible luck and happiness – you happy lucky man in a country at peace!

My wishes will undoubtedly arrive late. But they are leaving at an appropriate time, and my thoughts will surely arrive on time – and will surely cross with yours.

I will take an exam in 10 days and then another in 20, so please excuse the brevity of my message-

Once more, all my best wishes and my brotherly affection, Maurice

Patti just escaped internment and has the ability to change the subject from that to Opa's bad picture. Apparently no one likes the picture he sent- he must have been trying too hard to look debonair or something and everyone outright refuses it. I bet August liked it.

I do think that Opa's debonair photo (I have no idea what it looked like) was likely almost a slap in the face for everyone. To have an aloof picture with a not-so-serious letter from someone who is enjoying the peace of America- it probably felt fake or forced to Patti. Yet that is what everyone is doing in these last letters. They are writing about the war, about near-misses, and they are shrouding their fear in little maternal jabs at Opa for looking aloof. Patti says "my exams- adieu"- but she has been studying for these exams for quite some time, and I imagine her as a little Hermione from the Harry Potter stories who is disappointed when the exams are cancelled. Her exams aren't even cancelled- it's just not safe for her to take them. Maurice is still able to take his- and it seems like every note he writes to Opa is ended with "sorry so short, got to study!"

Patti has been protected by the United Press men (the company that August works for) and her engagement to Maurice. She is back in Grenoble- her place of second birth- and there she will have to stay to hide for the time being. She fusses at Opa for his aloof letter- but she hardly gave him any details in hers!

Give me the details people! Tell me what happened! Why do you all have your hands in your pockets? I know, I know, they had so many different codes of censorship working against them. Literally they were worried about Nazi censors. Socially, they had been brought up to be stoic. And with great love and care for each other- they are trying not to worry or bother the other.

Well everyone's still worried. So stoicism isn't working. Hopefully Patti finds out that August is doing OK before having to wait the three months it seems to take for a reply to come from Opa (who should know through his mother's letter that August is fine).

Patti is alright, and Paris is about to fall.