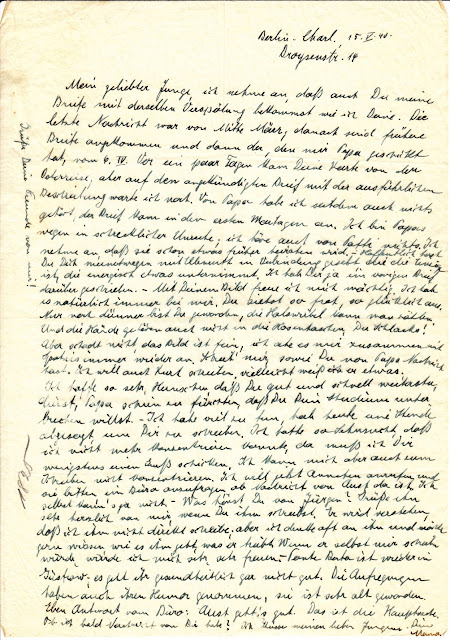 It seems reasonable to think that you receive my letters with the same delay, as I do with yours. The last one was from the middle of March, after that some earlier ones, and then the one Papa sent me dated April 6th, 1940. A few days ago your card about the Easter trip arrived, but I am still waiting for the announced letter with detailed descriptions.

I have not heard anything from Papa since then, the letter came early in March. I am very worried about Papa, and I also do not hear anything from Patti. I think she will get married a bit earlier now. Hopefully you have contacted Ellenruth for she is the only one who energetically takes steps to help me. I wrote to you about that in my last letter.

Now about your picture, it made me so very happy! Naturally I carry it with me all the time. You look so cheerful, so happy! But you seem thinner, one can count the bones on your neck. And again the hands do not belong in your pant pockets, you Schlacks. (Schlacks is slang and describes somebody who is way too relaxed, stands tall and skinny.  Perhaps lanky would be a good word.)  But never mind, the picture is nice, together with Spatzi I look at it over and over again.

Write to me as soon as you hear from Papa. I will also write to Kurt, maybe he knows something. I hope very much, Hunschenchild, that you can continue your studies well and fast. Papa seemed to be worried that you might interrupt your studies.

I have been very busy, cancelled a class today, to have one hour to write to you. My longing for all of you was so strong, I could not concentrate anymore, so I want to at least send you a short greeting. But I also cannot concentrate to write. Now I will call Anneken, and ask her to call the office, and inquire if there is news from Aust. (August) I myself cannot do that!!

(Ron comment: I believe that the “office” Ella refers to is August’s old newspaper office which was taken over by the Nazis.  Several of August’s old colleagues were certainly still working there. Ella, as a Jew, would be very hesitant to call the office, both in fear for her safety and for the safety of anybody who might try to help her find news of her ex-husband. My guess is that Anneken had a contact in the office who might have some unofficial contact with August. I have nothing to back up this theory, but it is as good an interpretation as any other.)

What do you hear from Juergen? Tell him hello when you write to him. He will understand that I cannot write directly, but I think of him often and would like to know how and what he is doing now. If he would write to me, it would make me very happy.

Aunt Berta is back in Guestrow, her health is not good. All the excitements have robbed her of her sense of humor, she has grown very old.

Just now a reply from the office: Aust is doing well! That is most important.

Will I hear from you soon?
I kiss my dear boy,
Your Mama

Say hello to your friends for me! (written in the margin)

Today I learned that the Nazi Stormtroopers may have been on Meth pills when they invaded Holland and France. That's how they had all that energy and pushed through with such speed and success. This is super weird and creepy. Hitler really was sort of a villain that was looking for new ways to be horribly effective. I think it is interesting that we are still fascinated (even if it's macabre) about this reign of terror that came so close to ruling the world. We are fascinated because it is more extreme and bizarre than science fiction.

Ella begins her letter talking about the correspondence she has had and how she has not heard from August since before the invasion of Holland. She is so worried about him that she leaves the letter writing (which she cancelled a lesson to do) to try to get information on him. She is able to get word through August's sister Annchen, who we suspect called an old colleague of August's in Berlin. The word is that August is OK- and that is good news indeed!

This worry reminds me of two things: In Opa's autobiography, he wrote this: "My sister and I are convinced that our mother loved our father until the day she died, but she never seemed bitter." I think this is true, and I do believe August continued to care for Ella, although not enough to be married to her. I don't think that Ella pined for August, but more that she still cared enough about him to keep her bitterness at bay. It could be true that she was the master of politeness and her children never saw her true emotions. However, my understanding of who Ella was- I can see her forgiving August enough for her to move on and focus on the things that she cared most about: her children. After all, in this time, it was August who was getting a lot of the letters and pictures through to Ella faster. Not only did she care about his wellbeing- she also cared about her best connection to her children through the mail. August and Ella's relationship is odd and yet I bet it is very familiar to many people who divorce but do not forget about their spouses.

The second thing I thought about in Ella's frantic search for information was how I felt on September 11, 2001 when I realized that my best friend's Dad might have been in the Pentagon. As soon as I remembered that, I called her family's home phone (we were in college at the time). My friend's dad answered the phone and reassured me that he was alright and that he no longer worked out of the Pentagon anymore. I have no idea why I didn't call my friend or why I thought her Dad should be telling a twenty year old where he was- but I was relieved and he was so kind. It's a moment of panic when an event becomes connected to you closer than you expect it to... When you drop everything and check in. That panicky feeling? I think Ella is living it perpetually. Every day is a new opportunity for something unknown and horrible to happen to someone in her family or herself- and she has little to no control over it- and hardly even a way to communicate with anyone about it. How terrifying and exhausting.

I think that's what she means when she talks about Aunt Berta (we still don't know who this is) aging quickly with all the "excitement."

Ella keeps pictures of her children close by as reminders of what she lives for. She is still urgently seeking a way out of Germany, and hoping beyond hope on the abilities of her twenty year old son and his similarly aged cousin to do something to help her.

In the meantime- all she wants is good information. Happy news, pictures (even if she chastises him for having his hands in his pockets!!), and greetings from his classmates. These all reassure her that somewhere on this planet, there is peace, happiness, and a beautiful shortage of "excitement."
Posted by Sarah Snow at Tuesday, September 15, 2015