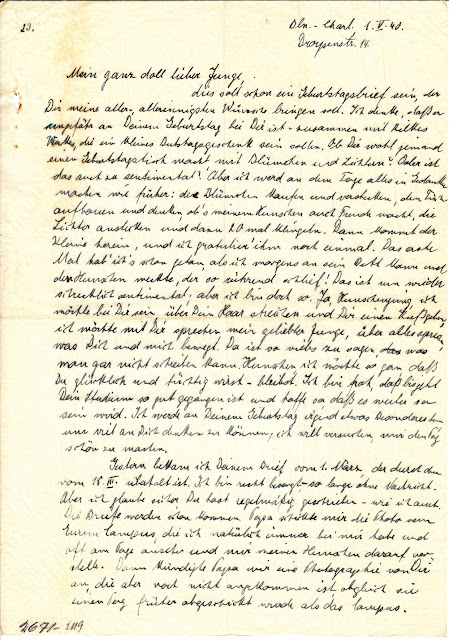 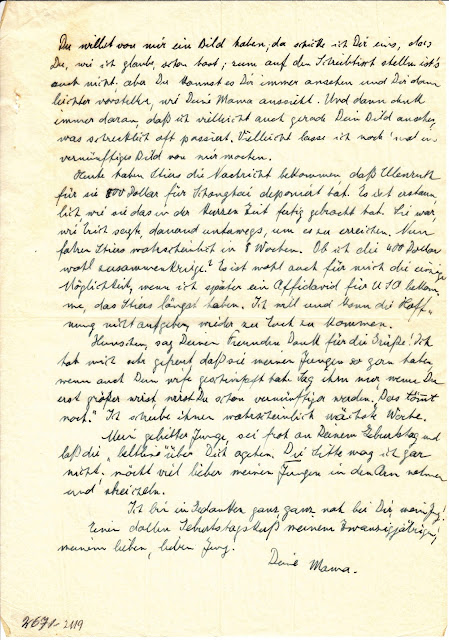 This will be a birthday letter already, to bring you my very very best and loving wishes. I think it should approximately arrive for your birthday together with Rilke’s Work (German poetry), a small birthday present for you.

I wonder if somebody prepared a birthday table for you, with flowers and candles? Or is that too sentimental? In my thinking I will do everything on that day, do everything like always before, purchase flowers and then hide them, prepare the table and then wonder if it will give my henschenchild joy, light the candles, then ring the bell twenty times (because he was 20). Then the little one comes in and I congratulate him again. I already did that the first time when I came to his bed in the morning, woke up my henschenchild  who was sleeping so sweetly. All of that is so very sentimental, but that’s the way I am.  Yes, my henschenchild boy I want to be with you, stroke your hair and give you a big kiss. I want to talk with you, my dear boy, talk about everything that is important to us. There is so much to say, things one cannot write about henschenchild. I wish so much for you to be happy and competent and always remain so. I am so glad that so far your studies have gone well and hope for it to continue like that. On your birthday I will do something special, to be able to think of you very much, I will try to make it a nice day for me.

Yesterday I received your letter dated March 1st, which had been passed by the one of March 18th already. I am so worried, such a long time without any news. And I do believe that you write regularly just as I have. Eventually the letters will come. Papa sent me the pictures of your campus, which of course I carry with me all the time, look at them several times each day ,and imagine my henschenchild being there. Papa also announced a picture of you, which I have not received yet, even though it had been mailed one day before than the one of the campus.  You want a picture of me? I will send you one which I think you have already. It is not good for sitting on your desk, but you can look at it a lot and imagine better how your Mama looks. And then think always that she might be looking at your picture the same time, which happens terribly often. Maybe I will have a good photo made of me.

Today the Stier's received the news that Ellenruth deposited the $800.00 to go to Shanghai. It is quite a surprise how she has managed that in such a short time. As I told you she was constantly on the go to accomplish that. Now the Stier's will probably leave in 4 weeks. Will I be able to raise the $400.00? It seems to be the only chance, if later on I receive an affidavit for the US, which the Stier's already had. I cannot and want not to give up hope that I can come and be with all of you.

Henschenchild tell your friends thank you for their greetings. I am happy that they like my boy so much, even if your wife got angry. Tell them when you grow up surely you will be more sensible (reasonable). That will come later! I will write to them next week.

My dear boy, be happy on your birthday and endure the beltline. (I think she is talking about the American tradition of spanks on your birthday) I do not like that custom at all, would rather take my boy in my arms and caress him. In my thoughts I am very close to you, my boy.

A big birthday kiss for my twenty-year-old, my beloved boy.

Ella writes to Opa an early birthday greeting, knowing that the letter won't reach him until closer to his birthday on May 22nd. This year he was turning twenty, no longer a teenager. How young he was with the world on his shoulders.

Ella describes the German (and Döppner) birthday traditions so nicely. They set a birthday table, light candles and ring the bell for the age. It looks like she would buy flowers and hide them for him to find. What a sweet tradition. Here she hopes he can endure the American tradition of birthday spanks- the Germans are the gentle ones. Ironic. She mourns the loss of being able to spend his birthday with him, stroking his hair and giving him hugs. This isn't just a mother who misses her boy off at college. She isn't sure if she has already spent her last birthday celebration with him.

I am having a hard time finding the words to capture the feeling I have every time I read one of Ella's letters, especially these that come as she begins to frantically search for a way out of Berlin. I feel hollow. Sort of a dull ache, with a hollow hope. She is so desperate, every avenue she tries seems impossible. Everything she talks about seems like a long shot. And yet the aim- the goal of being with her children is so real and so constant- that to imagine her not achieving that is the most devastating thought. It's impossible for her to be without them. She cannot exist alone for much longer- how will she survive? Not just physically but emotionally. How will she endure any more heart ache and loneliness? Her soul is depleted every day she lives with her hollow hope of seeing her children.

The Stier's (her sister and brother-in-law) have a plan and money to go to Shanghai. Somehow Ellenruth has found $800 to pay her parent's way to freedom. Ella wonders if she can come up with the money- she doesn't seem convinced.

I hope she gets some letters from Opa soon- I'm sure they're floating in the Atlantic somewhere. Until then, she must glance at his picture, his campus, and fantasize that she lives near him and can speak to him anytime without censors or fear.

What does Opa feel? I really can't imagine it.
Posted by Sarah Snow at Thursday, September 10, 2015