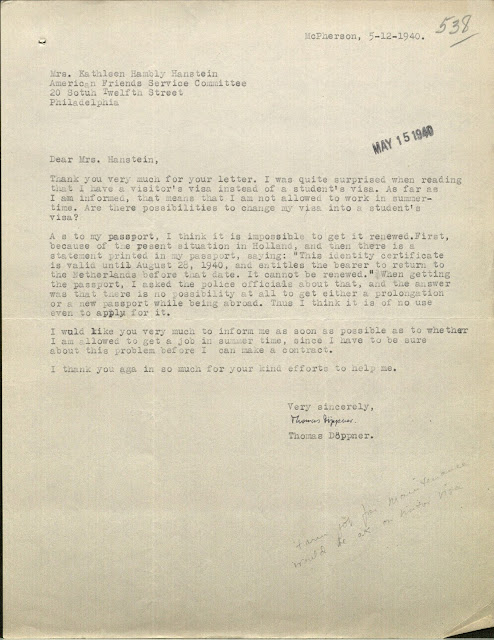 Letter from Opa to Mrs. Hanstein

Thank you very much for your letter. I was quite surprised when reading that I have a visitor's visa instead of a student's visa. As far as I am informed, that means I am not allowed to work in summertime. Are there possibilities to change my visa into a student's visa?

As to my passport, I think it is impossible to get it renewed. First, because of the present situation in Holland, and then there is a statement printed in my passport, saying: "This identity certificate is valid until August 28, 1940, and entitles the bearer to return to the Netherlands before that date. It cannot be renewed." When getting the passport, I asked the police officials about that, and the answer was that there is no possibility at all to get either a prolongation or a new passport while being abroad. Thus I think it is of no use even to apply for it.

I would like you very much to inform me as soon as possible as to whether I am allowed to get a job in summer time, since I have to be sure about this problem before I can make a contract.

I thank you again so much for your kind efforts to help me.

Handwritten note on bottom says: Farm job for maintenance would be ok on visitor's visa.

Opa touches base with Mrs. Hanstein about his visa. This conversation has been going on back and forth for a little bit. Now everyone is pretty much assuming that Opa has a visitor's visa. Opa is trying to figure out just what he's supposed to do since he really needs to be able to work over the summer to support himself.

I do love Opa's clarification on the Holland passport- he says that the passport is stamped that it can't be renewed and when he asked the police officer they said "yep- it can't be renewed." And since the only way to fix that is to go back to Holland and Holland is currently playing host to the Nazis- that passport is null and void the minute it expires.

I think Opa really is likely feeling a little panicky at this point. Holland has been invaded. His passport is now really useless. His current visa has been downgraded (in his understanding) and he's not even sure he can get a job. He could be in serious trouble.

However, we get a glimpse into the response as the handwritten note states that his farm job will be ok.

As much as the rule following German in Opa might be nervous about this fluid citizenship- I do wonder if anyone is really paying attention to what kind of visa this kid has. I mean, in Kansas, are they really going to ask to see his visa and understand all the notes and paragraphs and numbers? I mean, really. I bet he could get a job as a cook and no one would know. Now- the fact that Germany just swept through the Netherlands without hardly a fight- that might give Opa some trouble as a German in America.