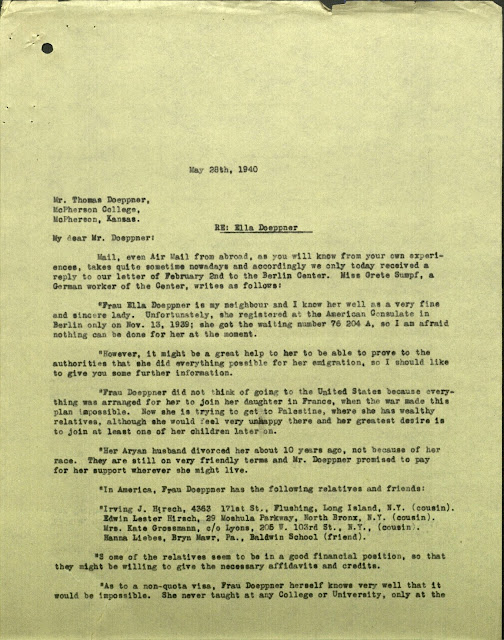 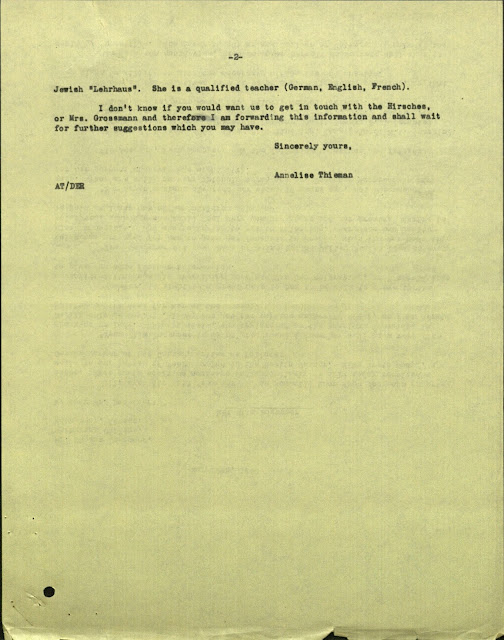 Letter from Annelies Thieman to Opa

Mail, even Air Mail from abroad, as you will know from your own experiences, takes quite sometime nowadays and accordingly we only today received a reply to our letter of February 2nd to the Berlin Center. Miss Grete Sumpf, a German worker of the Center, writes as follows:

"Frau Ella Doeppner is my neighbor and I know her well as a very fine and sincere lady. Unfortunately, she registered at the American Consulate in Berlin only on Nov. 13, 1939; she got the waiting number 76 204 A, so I am afraid nothing can be done for her at the moment.

"However, it might be a great help to her to be able to prove to the authorities that she did everything possible for her emigration, so I should like to give you some further information.

"Frau Doeppner did not think of going to the United States because everything was arranged for her to join her daughter in France, when the war made this plan impossible. Now she is trying to get to Palestine, where she has wealthy relatives, although she would feel very unhappy there and her greatest desire is to join at least one of her children later on.

"Her Aryan husband divorced her about 10 years ago, not because of her race. They are still on very friendly terms and Mr. Doeppner promised to pay for her support wherever she might live.

"In America, Frau Doeppner has the following relatives and friends:

"Some of the relatives seem to be in a good financial position, so that they might be willing to give the necessary affidavits and credits.

"As to a non-quota visa, Frau Doeppner herself knows very well that it would be impossible. She never taught at any College or University, only at the Jewish "Lehrhaus". She is a qualified teacher (German, English, French).

I don't know if you would want us to get in touch with the Hirsches, or Mrs. Grossman and therefore I am forwarding this information and shall wait for further suggestions which you may have.

Annelise Thieman has succeeded in writing one of the most depressing, unhelpful letters of all time. I'm being harsh- but oh man is this letter the worst!

Thieman quotes Grete Sumpf's letter that we actually got to read a while back in the blog. Thieman's letter was written on May 28, 1940- and she had JUST received Sumpf's letter from February 2, 1940 (over three month delay!). That's the first depressing fact. Effective communication is basically nonexistent, which makes helping Ella very difficult.

As I read the letter Grete Sumpf wrote- I noticed a second thing. The last time I focused on the first thing I noticed, which is the idea that Ella was trying to prove to the authorities that she tried to leave the country. This was an epiphany for me because when you learn about the holocaust, often (as a child in America) you are only taught about the Jews hiding and being sought out to ship off to the Concentration Camps. The truth is that the systematic shipment of Jews to camps didn't really start happening full swing until after the Wannsee Conference, where the icky Nazis came up with the "Final Solution" plan. That wasn't until January 20, 1942. Before the "solution" of "kill them all"- the plan was to chase them out- or ship them to other countries and dump them in ghettos. That was what I learned last time I read this letter.

This time I learned (or realized) that the entire letter is written as a form of protection, not an action plan for getting Ella out, mainly because Grete Sumpf declares officially in the beginning "nothing can be done for her."

I don't think it sunk in until now that this is when we get the jury's decision. Ella is stuck. There's no hope. She can't get to the United States. She can't get to France. And now we know that she can't get to Palestine, because the lovely British closed those borders to German refugees. Ella is stuck. This information, these documents and affidavits are all just for show- just to show the Nazi government that while she really did try to listen and get out like they asked her and every other Jew to- she just couldn't get out.

This caused me to think about something. I had a conversation with my friend Rachel the other day about this progression in the Nazi policy on how to deal with the Jews that they hated so much. First they used them as a scapegoat. Then they decided they were not citizens and stripped them of their citizenship and rights. They asked them to leave- go anywhere but here- so they wouldn't "sully" the beautiful Aryan race. Then Hitler went and got this brilliant idea that he would take over the world (since the Netherlands and France seemed fairly easy to conquer)... so ultimately the Nazis have to deal with the Jews again, because they took over the land they ran away to.

I'm oversimplifying- but I thought- if the Jews were allowed refuge in other countries (like the US), would the Germans have felt such an urgent need to come up with a final solution? I know that this isn't entirely fair as the Jews should not be forced to leave their homes- whether they are welcomed by outsiders or not. But what if we did welcome them? Could the hospitality of other countries potentially have slowed or lessened the catalyst for the Nazi holocaust? It's an impossible question- I know.

Either way, here we are with Ella's verdict, and it is super scary: "Nothing can be done for her." Does Ella know this truth deep down inside? What on earth is Opa thinking? The AFSC worker is asking Opa, a freshly turned 20 year old, what her next step should be in his mother's hopeless case. How incredibly defeating. I would be thinking- "What?! Suggestions?!" How could someone like Opa possibly know what the next step should be? This is the letter I would read over and over again insanely trying to see if maybe that first paragraph might disappear and it doesn't end up being that bad or hopeless.