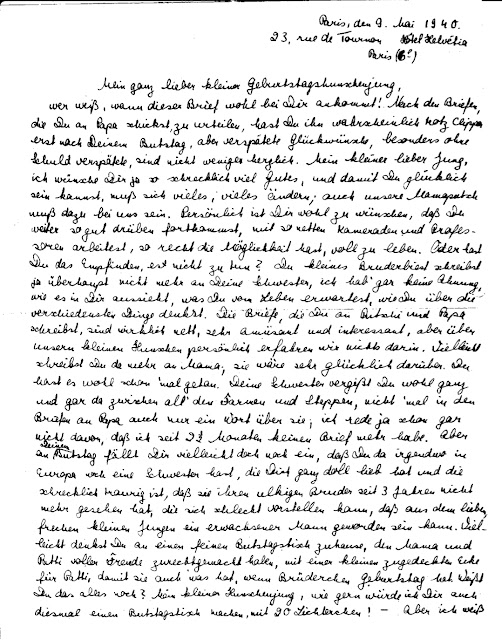 
My very dear little birthday Hunschenboy,
Who knows when this letter will actually get to you! Judging from the letters you send to Papa, despite the ship you’ll probably get it just after your birthday, but belated birthday wishes, especially when it’s not my fault they’re late, are no less sincere.


My little sweet boy, I wish you so terribly many good things, and for you to be happy, so, so much has to change; also our Mamaputsch has to be with us. Personally I wish for you that you continue to get along just as well over there, work with such nice friends and professors, have the opportunity to live fully. Or don’t you have the inclination to do that?


You, you little brother-beast, don’t write to your sister anymore at all, I have absolutely no idea how things look for you, what you hope for in life, what you think about different things. The letters you send to Putschi and Papa are really nice, very entertaining and interesting, but we don’t experience anything of our little Hunschen personally in them. Maybe you write more about that to Mama; she would be very happy about that. Surely you’ve done so already. You completely and totally forget your sister there between all those farms and plains, not even a word about her in the letters to Papa; I won’t even mention the fact that I haven’t gotten a letter in 2 ½ months. But on your birthday maybe it will occur to you once again that somewhere over in Europe you still have a sister, who loves you a lot and who is terribly sad that she hasn’t seen her weird brother in three years, who can hardly imagine that that sweet, sassy little boy could have become a grown man.


Maybe you’re thinking of a nice birthday table at home, that Mama and Patti joyfully put together for you, with a little corner decorated for Patti so that she also got something when Little Brother had a birthday. Do you still remember all that? My little Hunschenboy, how much I’d like to make you a birthday table this year, with 20 candles! But I know you’re doing well now too, and surely your nice friends will give you a lovely birthday. Let me know how many bouquets of flowers the girls brought you!
Besides, I assure you: the stupid war also left me without a single letter on my birthday, and that all isn’t so important. We know how well we are all holding together, anyway, and I also know that despite his laziness in writing, my little Hunschenboy hasn’t completely forgotten me.


The letters that Papa sends me from you always make me so happy. It’s great that you have the prospect of getting a scholarship again next year and that you can still earn a little something on the side! For the holidays you’ll certainly find something better than being a truck driver, you’re a capable guy and a lucky dog too. What did you tell the people in your tournament presentation? Not too much nonsense? Were you well prepared?


I’m really working a lot now, and this is sure to be my last or next-to-last letter from Paris. Mid-June is exams (if I fail, you’re going to get it) and around the 20th is our wedding in Grenoble. I can already hardly wait any longer to see my little Maurice again. His sweet letters don’t make the waiting easier. Did he actually write to you at some point? He meant to, but he’s also studying for two exams at the beginning of June now: matematiques speciales and mecanique rationelle. Then he just has one more certificate to go for his licence d’enseignement, which he can hopefully get in October, before he’s called up to duty. After the war he’ll then work on his agregation, which will give him the possibility of getting better and more interesting teaching positions. And by the way, the little one is just as much of a baby as you. I always forget that, or aren’t you really one anymore? And this time I can’t even make a birthday table for Maurice, who’s not even as far away as you. Well, maybe Emma will worry about that, she lives nearby. If you have time, write him a nice letter! It’s fine to write in German, if your French isn’t good enough for a personal letter; he understands it very well.


Next week I’ll probably have new pictures of myself, and if you’re good, you’ll get one as a birthday present. But I’m still waiting patiently for one from you. That’s not nice. I’ve asked you for one a lot.


Now I wish you everything, everything good, a fine birthday, a fine year and an even finer life, the very finest birthday kisses,
Patti

Patti is studying hard for her exams in Paris. She finds the time to sit and write Opa a nice birthday letter full of guilt trips. Patti seems to have taken lessons from her mother. Whew! She lays them on thick! To add insult to injury, she continues to write to him as her dear little sweet baby brother, although he is the same age as her fiancé. She is cracking me up. I'm sure Opa had a different reaction.

Patti remembers the birthday table just as fondly and hopes that Opa might have someone to do that for him. She can't do it for Maurice (who shares Opa's birthday), and she recognizes that since the war began - even birthdays aren't quite the same.

You can tell that although Patti is writing light-hearted and guilt trip filled words- she is underneath it all - concerned about her brother- wishing she could feel connected to him again- and anxious about their mother's future.