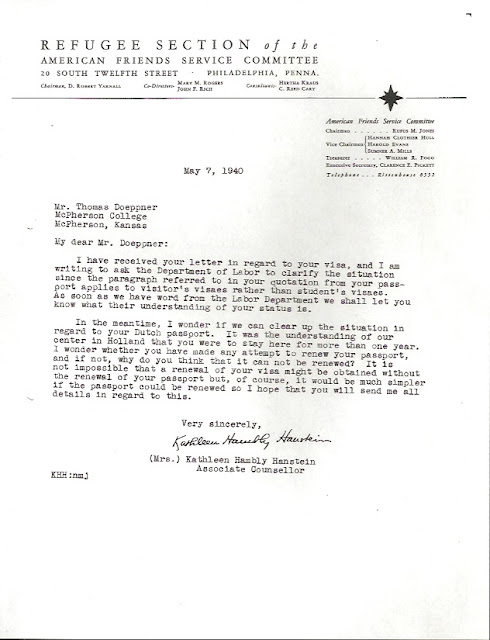 I have received your letter in regard to your visa, and I am writing to ask the Department of Labor to clarify the situation since the paragraph referred to in your quotation from your passport applies to visitor's visas rather than student's visas. As soon as we have word from the Labor Department we shall let you know what their understanding of your status is.

In them entire, I wonder f we can clear up the situation in regard to your Dutch passport. It was the understanding of our center in Holland that you were to stay here for more than one year. I wonder whether you have made any attempt to renew your passport, and if not, why do you think that it cannot be renewed? It is not impossible that a renewal of your visa might be obtained without the renewal of your passport but, of course, it would be much simpler if the passport could be renewed so I hope that you will send me all details in regard to this. 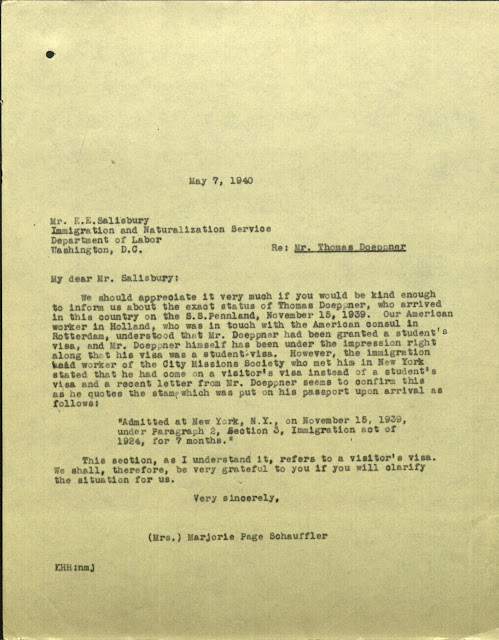 Letter from Mrs. Schauffler of AFSC
to Mr. Salisbury of Immigration and Naturalization Service (INS)

We should appreciate it very much if you would be kind enough to inform us about the exact status of Thomas Doeppner, who arrived in this country on the S.S. Pennland, November 15, 1939. Our American worker in Holland, who was in touch with the American consul in Rotterdam, understood that Mr. Doeppner had been granted a student's visa, and Mr. Doeppner himself has been under the impression right along that his visa was a student visa. However, the immigration aid worker of the City Missions Society who met him in New York stated that he had come on a visitor's visa instead of a student's visa and a recent letter from Mr. Doeppner seems to confirm this as he quotes the stamp which was put on his passport on arrival as follows:

This section, as I understand it, refers to a visitor's visa. We shall, therefore, be very grateful to you if you will clarify the situation for us.

Opa has a visitor's visa. All signs point to it- and now Mrs. Hanstein from the AFSC is going to write to the INS to clarify. I did think this might not have been the best thing- because sometimes it is better to ask for forgiveness than permission, right? (Where did that saying come from?) Oh well- soon enough the INS will have Opa's expiring visitor's visa on their radar and Opa and the AFSC will need to do some quick work.

These letters were written May 7th, 1940. All you history buffs out there know that the invasion of the Netherlands begins in three days. I have a feeling Opa's passport renewal process will be complicated- if he tries at all.
Posted by Sarah Snow at Friday, September 11, 2015