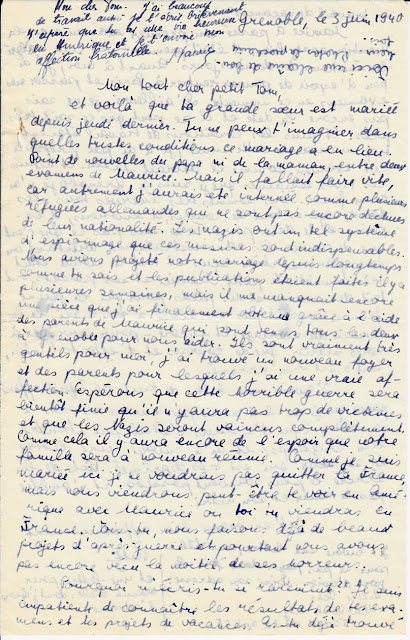 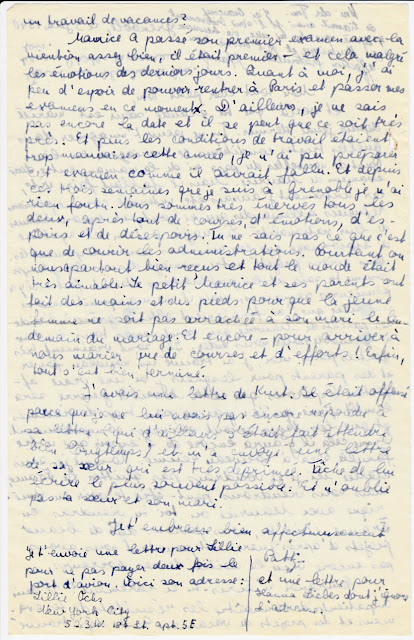 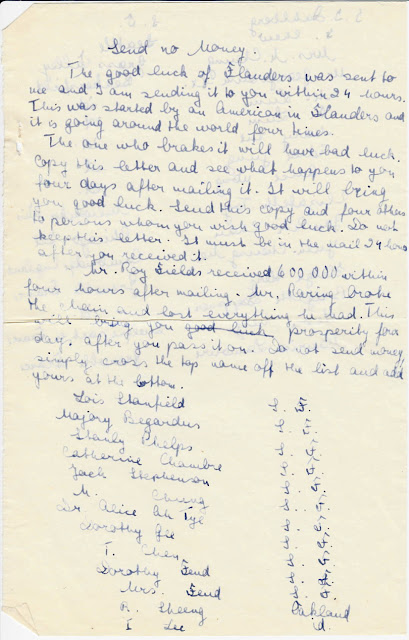 My dear Tom – I have lots
of work too and I’m writing you
briefly. I hope that you are having
a happy life in America and I send
you my fraternal affection.
Maurice

So guess what! Your big sister has been married since last Tuesday. You can’t imagine the sad conditions under which this marriage took place. No news of Papa nor of Mother, between two of Maurice’s exams. But we had to do it quickly, for otherwise I would have been interned like many other German refugees who have still not forfeited their nationality. The Nazis have such a spy system that these measures are indispensable. We had planned on marriage for a long time, as you know, and the proclamations [banns] were done many weeks ago, but I was still missing a piece that I finally got thanks to the help of Maurice’s parents who came to Grenoble to help us. They are really very nice to me, I have found a new family and parents for whom I have real affection. Let us hope that this horrible war will be over soon enough that there won’t be too many victims and that the Nazis will be completely conquered. In the same way, there is still some hope that our family will be reunited once again. Since I am married here I wouldn’t want to leave France, but maybe we can manage to come see you in America with Maurice or you could come to France. You see, we’re already making beautiful plans for after the war and yet we have still not seen the half of its horrors.

Why do you write so infrequently? I am impatient to learn your exam results and your plans for vacation. Have you found a summer job?

Maurice passed his first exam with pretty good results, he was first – and that despite the emotions of recent days. As for me, I have little hope of being able to return to Paris and pass my exams at this point. However, I still don’t know the date and it may be that it is very soon. Then the working conditions were too bad this year, I haven’t been able to prepare for this exam as it required. And then these three weeks that I’ve been in Grenoble I haven’t cared about anything. We are very tired, both of us, after all the errands, the emotions, hope and despair. You don’t know what it’s like to cope with bureaucracies. Nevertheless, we have been well received and everyone is very friendly. Little Maurice and his parents went all out so that the young wife wouldn‘t be torn away from her husband the day after the wedding. And still – to manage to get married, what a lot of arrangements and effort it took! But at last, everything has ended well.

I had a letter from Kurt. He was frightened becaue I hadn’t yet answered his letter (which however took a long while in coming) and he had not sent on a letter from his sister which is very discouraged. It’s his job (?) to write as often as possible. And don’t forget your sister and her husband.

I embrace you most affectionately.

I am sending a letter for Lillie so as not to pay airmail postage twice. Here is her address:

And a letter for Hanna Liebes whose address I don’t know.

[The final two pages of this letter are a chain letter: `The good luck of Flanders was sent to me and I am sending it to you withinn 24 hours ... etc. The people to whom the letter has been sent are listed; the last three names are Brigitte Doeppner, Lizzie(?) Mesz, and Maurice Lamoure.]


It's nice of Maurice to write a note, but he needs a new line. Maybe he can write: "ACED my last exam- aren't you proud to be related to a genius?! PS- I married your sister." Alas, he's a french man who is married to a German girl and he writes about fraternal affections.

This letter from Patti shows a little more emotion into the ordeal that was the French defeat under the Nazis. It gives us insight into what happened and how our little Patti got married.

She's been married since Tuesday, not a day you usually wed, and it was an act of protection and legality before an act of professed love and excitement. I wonder if Patti mourned that or if she didn't think about that kind of thing. We American girls are taught from a young age to fantasize about our weddings and often I think we have pretty unrealistic expectations about how our marriages should start. Patti's marriage started between exams with the help of paperwork and future in-laws. None of her family were present, (she hadn't even heard from her parents) and likely few of her friends.  They were married quickly to keep Patti from being interned by the Nazis as a German refugee. Helene (Patti's daughter) told me that Patti worked very hard on her French and hoped to blend in completely as a native French citizen. This was certainly a helpful step for Patti- to marry a French man.