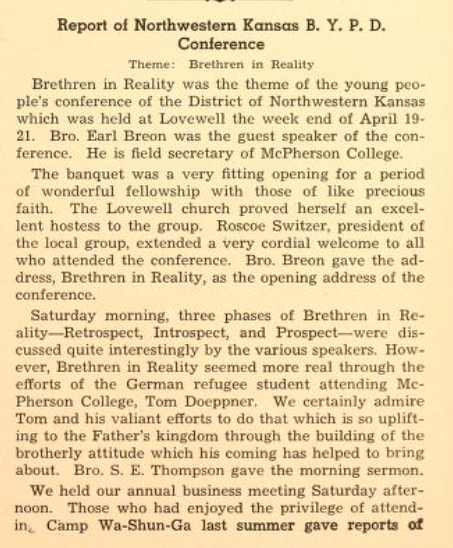 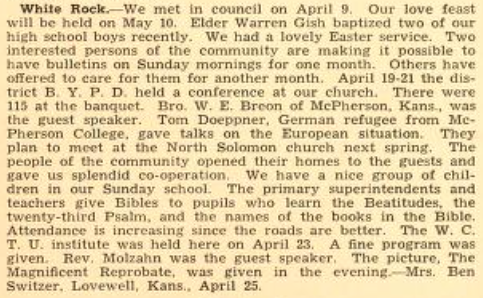 Brethren in Reality was the theme of the young people's conference of the District of Northwestern Kansas which was held at Lovewell the week ed of April 19-21. Bro. Earl Breon was the guest speaker of the conference. He is field secretary of McPherson College.

The banquet was a very fitting opening for a period of wonderful fellowship with those of like precious faith. The Lovewell church proved herself an excellent hostess to the group. Roscoe Switzer, president of the local group, extended a very cordial welcome to all who attended the conference. Bro. Brecon gave the address, Brethren in Reality, as the opening address of the conference.

Saturday morning, three phases of Brethren in Reality - Retrospect, Introspect, and Prospect- were discussed quite interestingly by the various speakers. However, Brethren in Reality seemed more real through the efforts of the German refugee student attending McPherson College, Tom Doeppner. We certainly admire Tom and his valiant efforts to do that which is so uplifting to the Father's kingdom through the building of the brotherly attitude which his coming has helped to bring about. Bro. S.E. Thompson gave the morning sermon.

We held our annual business meeting Saturday afternoon. Those who had enjoyed the privilege of attending Camp Wa-Shun-Ga last summer gave reports of...

....
White Rock - We met in council on April 9. Our love feast will be held on May 10. Elder Warren Gish baptized two of our high school boys recently. We had a lovely Easter service. Two interested persons of the community are making it possible to have bulletins on Sunday mornings for one month. Others have offered to care for them for another month. April 19-21 the district B.Y.P.D. held a conference at our church. There were 115 at the banquet. Bro. W.E. Breon of McPherson, Kans., was the guest speaker. Tom Doeppner, German refugee from McPherson College, gave talks on the European situation. They plan to meet at the North Solomon Church next spring. The people of the community opened their homes to the guests and gave us splendid co-operation. We have a nice group of children in our Sunday School. The primary superintendents and teachers gave Bibles to pupils who learn the Beatitudes, the twenty-third Psalm, and the names of the books in the Bible. Attendance is increasing since the roads are better. The W.C.T.U. institute was held here on April 23. A fine program was given. Rev. Molzhan was the guest speaker. The picture, The Magnificent Reprobate, was given in the evening - Mrs. Ben Switzer, Lovewell, Kans., April 25.

Opa's talks about the "situation in Europe" are well-received by the Church of the Brethren. I so wish we had a transcript of his speech. I can only imagine how he must have felt speaking from first-hand experience to an audience incredibly separated and insulated from the events he had witnessed. He had seen Hitler from mere feet away.

I'm so proud of Opa trying to educate the people in these small mid-western towns in Kansas. That can't have been easy. He likely heard ignorance and naivety beyond his comprehension. But he showed up, he shared, and despite the fact that he has so many other things on his plate right now- I'm so grateful he invested in this.

My only sadness is that his willingness and openness and urgency to share his story decreased as he became more embedded in the American fabric. He never told me about his life until he gave that speech in my sister's 10th grade European History class, which compelled him to publish his autobiography. I knew very little until he gave me that book. All I knew from Opa was that I was lucky to live in America. I wish he had opened my eyes a little more.
Posted by Sarah Snow at Tuesday, September 15, 2015