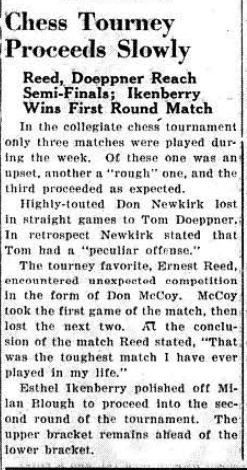 Article about Opa in Chess Tournament

In the collegiate chess tournament only three matches were played during the week. Of these one was an upset, another a "rough" one, and the third proceeded as expected.

Highly-touted Don Newark lost in straight games to Tom Doeppner. In retrospect Newark stated that Tom had a "peculiar offense."

The tourney favorite, Ernest Reed, encountered unexpected competition in the form of Don McCoy. McCoy took the first game of the match, then lost the next two. At the conclusion of the match Reed stated, "That was the toughest match I have ever played in my life."

Esthel Ikenberry polished off Milan Blough to to proceed to into the second of the tournament. The upper bracket remains ahead of the lower bracket.

Bracket for the Collegiate Chess Tourney

So let me go ahead and warn you, we didn't find the article that told us who won this tournament. Which is unfortunate! However, I love how the article treats this tournament as a genuine sport. It's riveting! It sounds like Opa's win over Donald Newkirk was an upset- and that he had a "weird" method. (Maybe German?)

Let's just say that Opa won, haha. Oh and I never learned to play chess. Opa missed the boat on that one- I may have been able to learn some "peculiar offense" from him!

Seriously though, how did Opa find the time to do all this?
Posted by Sarah Snow at Friday, September 04, 2015