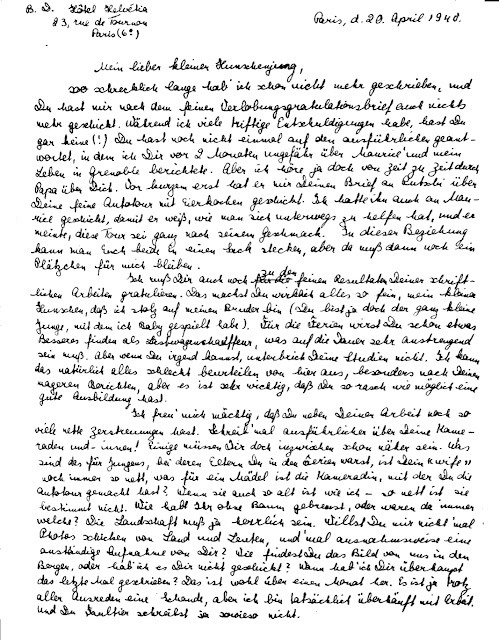 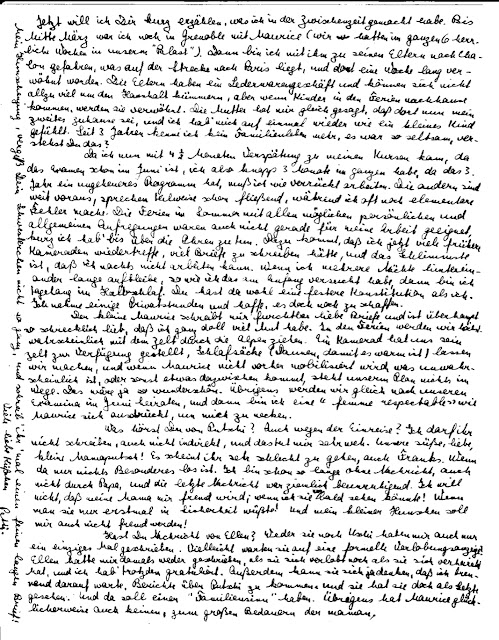 What is it about Germans and long sentences?! Whew. This is a great letter from Patti- it gives us a little bit of everything and some weird funny details (egg-boiling on a road trip? Was this an inside joke??). This letter gives us insight to what is happening in the world, the little things that Patti and Opa are writing to each other about- and the growing fear and mystery around their mother's condition. (See- I have a little German long-sentence gene in me!)

Let's go through this letter a little bit at a time. This recurring theme that Maurice and Opa were a lot alike surprises me. From the stories I heard of Maurice and what I know of Opa- I wouldn't have put them in the same pea pod. I do think there might have been a few things going on here... One, I think Patti is still trying to put Maurice in a good light for everybody- especially Opa- and what better way to do that than say they are alike? Also, I think that they were probably a little alike in that they were both young men, same age, perhaps with similar humor.

The translator, my Dad and I puzzled over why there would be mention of the egg-boiling on the road trip. My Dad offered the idea that he had heard of people cooking meat on the hood of a hot car- maybe they did the same with eggs? I thought of the old saying that it is so hot you could fry an egg on the sidewalk. Who knows- this is the fun and hard part about reading the personal letters of someone from 1940.

It sounds like Opa had a lot of fun in his spare time- even if he was studying so much. I think he is talking a little bit about his break time (Thanksgiving, Christmas, maybe even Spring Break). He seems to have caught up a little bit on his work load and is able to relax with his "wife" (roommate), and even make time for road trips with girlfriends! We may even know who this girlfriend was- because we met her a couple of weeks ago!
So that's a side story: Lucile. She was a student at McPherson and dated my Opa for a little while (6 months?) and for her it was all fun and games until Opa proposed (?!?!?!). She politely declined and they went their separate ways for a few weeks before he was fine with being friends. She said although she really wasn't interested in him romantically- it was a very special friendship. I learned this just recently after this 94 year old emailed me and told me she knew my grandfather. Life is amazing, isn't it?!

Back to Patti's letter... the comment about Opa driving and braking with a tree -we think might be a joke about his bad driving- and I have to say - even as an adult his driving was questionable. I always thought- oh he drives like that because he grew up driving on the audobahn. Now I know the truth. He drove like that because he learned to drive by himself, and with Kansas roads (flat and no cars). Best case scenario- a farmer taught him to drive!

Patti offers a compliment on Opa's English which really shouldn't be taken lightly because she really was a linguist even at this young age. I'm sure that gave Opa a boost.

Patti's plans for her life after exams and for the summer are so sad. Here she is in Paris, the end of April. We know that Paris is host to Hitler in June, and that the campaign to invade begins on May 10th- just over two weeks away. Patti is hoping for a wedding, a vacation in the Alps, a stall in Maurice's draft. Who knows what the future holds, but we can be sure that it won't be what she plans here.

I loved how Patti described being in her in-laws home- like being a child again, spoiled and loved on with home cooked meals. I remember that feeling when I came home for the first time after being gone for college. The smells of home, the familiar food, the comfort of my bed... it felt so cozy- like I could relax and be a child again. It's been three years since Patti got to experience that.

News for Ella is not good- no one is being specific so everyone is guessing. The sense is that things are bad, and only the imagination is providing the information. Patti can't write to her (why not? who ordered that?). She just wants to see her again, and no one seems to know exactly what is happening or if she has any chance of escaping. I can't imagine having a finance, near the end of my studies, and not knowing when I would see my mom again. Patti says "I don't want my mama to become a stranger to me."

What will happen to these tenuous lives? The globe is about to be shaken- and all the people will be thrown around... where will they land?