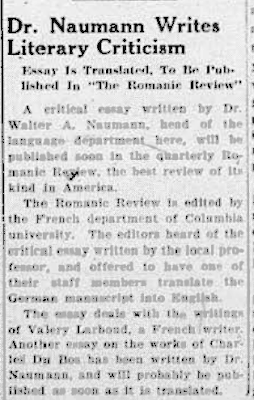 Articles in The Spectator (McPherson College Newspaper) about Dr. Naumann's Literary Criticism to be published in the Romanic Review, and his contribution to literary criticism for poetry in The Spectator. Dr. Walter A. Naumann, head of the college language department, recently has had a critical essay on the French writer, Valery Larboud, accepted for publication by the quarterly Romanic Review, the best review of its kind in the country.

Dr. Naumann Writes Literary Criticism
Essay Is Translated, To Be Published in "The Romanic Review"

A critical essay written by Dr. Walter A. naumann, head of the language department here, will be published soon in the quarterly Romanic Review, the best review of its kind in America.

The Romanic Review is edited by the French department of Columbia university. The editors heard of the critical essay written by the local professor, and offered to have one of their staff members translate the German manuscript into English.

The essay deals with the writings of Valery Larboud, a French writer. Another essay on the works of Charles Da Bos has been written by Dr. Naumann, and will probably be published as soon as it is translated.

Dr. Naumann Starts To Tell How Poems In The Spectator May be Judged for Value

Asserting that literary criticism is for the purpose of explaining, appreciating, and judging works of literature, Dr. Walter Naumann, head of the language department, Monday spoke in chapel about the different methods of literary criticism in a speech cut short by limited time caused by a wait, and a piano duet.

An author of several critical essays, Dr. Naumann began by explaining the different types of criticism and showing their effect on literature.

The interpretations of the poems of Homer made by critics 300 years after his death were analyzed for their moral meaning. They tried to give a theological interpretation to the writings, and this method was used for many hundreds of years, particularly in the medieval period, said Dr. Naumann.

The second type of literary criticism is the so-called "classical" criticism. This was used in the ancient world and the modern world. It first  asks, "I this work perfect or imperfect, beautiful or ugly." These said Dr. Naumann, are purely aesthetic standards.

In order to judge whether a work of literature is perfect or imperfect, certain standards are erected. Dr. Naumann pointed out, "In the field of literature there is nothing as perfect and as beautiful until our days as the Greek and Roman literature, also called the classical literature." According to Dr. Naumann the literary criticism that is based on certain characteristics which all classical writers have in common is "much discredited today."

Matthew Arnold, a classical critic, was among the first to give "greater weight to the individuality of the man whom he examined." Dr. Naumann said, "The ear of a critic must be extremely good, if he wants to employ this method only. And in honor of Matthew Arnold it can be said that his ear nearly never deceived him."

Exposing what he called a "psychological" criticism, Dr. Naumann showed the modern trend. According to this method, "The critic is no longer interested in the abstract beauty of the work; he is not even so much interested in the work in itself. He looks for the man inside the work. He wants to know what kind of an animal the man is, to what psychological breed he belongs, how he behaves."

He says, "There is neither a moral nor an aesthetic judgment passed on the writer in question."

Development of style is also an important feature to the modern critic. Not only must the work show a monographic portrait of the writer, it must show a distinctive style, "the highest achievement of a writer."

Sincerity, according to Dr. Naumann, is an essential element in all good writing judged by the psychological approach.

In the conclusion of his address Dr. Naumann was prepared to indicate, "And we have reached our answer. This psychological out that is shaping modern literature is also determining you when you are writing a poem for the Spectator. You do not ask yourself, how your poem will stand besides Homer and Virgil- what most of you know only by name. You do not ask yourself either what value it will have measured by Shakespeare. But all that you try to do is satisfy your own conscience, to do as well as you can, to develop yourself, because then you will be sure to have done the best that you can.

Dr. Naumann, by the picture, is younger than I expected. He an Opa shared a bond of common journeys away from Germany to a new home in Kansas. Naumann was celebrated for his accomplishments (which I mentioned in a previous post was genius PR by McPherson College). It sounds like he was well-respected in the literary world, with a prestigious publication offering to translate his work so that it could be published in their Review.

The article that covers Dr. Naumann's lecture on Literary criticism (and how it will affect the poems admitted for publication in The Spectator), was thorough! My absolute favorite line though was this one:

...Dr. Walter Naumann, head of the language department, Monday spoke in chapel about the different methods of literary criticism in a speech cut short by limited time caused by a wait, and a piano duet.

Dr. Naumann's speech was cut short by someone being late and a piano duet. HAHAHA! But seriously, that would have made Opa nuts, he did not stand for tardiness and I imagine Dr. Naumann, German man he was, also did not appreciate the late start. How long was this piano duet? I bet Opa was in the audience. Maybe he and Naumann locked eyes for a moment, with the knowing look that this late nonsense would never happen in Germany. Probably not, but it's entertaining to imagine.

What kills me is that it seems the best part of his speech was his conclusion, and the article indicates that he was unable to convey that part. Too bad- because it inspired me! He essentially tells budding poets: don't compare yourself to Homer and Shakespeare. The value of your poetry is in whether or not you satisfied your own conscience and tried your very best. That's good advice for many endeavors!