Ella's Case file with the American Friends Service Committee  (AFSC) was opened in Philadelphia shortly after Opa requested they look into helping her get into the United States. Part of the process of getting information required an interview with the refugee, which Greta Sumpf was able to do. Greta was part of the Quaker group in Berlin, and Ella had interacted with her before. Greta was part of the Berlin Quaker group effort to reach out to "confessionsloss" Jews- or people who were Jews by "blood" but not connected to the Jewish faith community. Ella mentions her in this letter when she gave an informational talk about Fridtjof Nansen. Below is the paperwork that followed Greta's interview (I think almost in terms of a social worker's Start of Care packet). 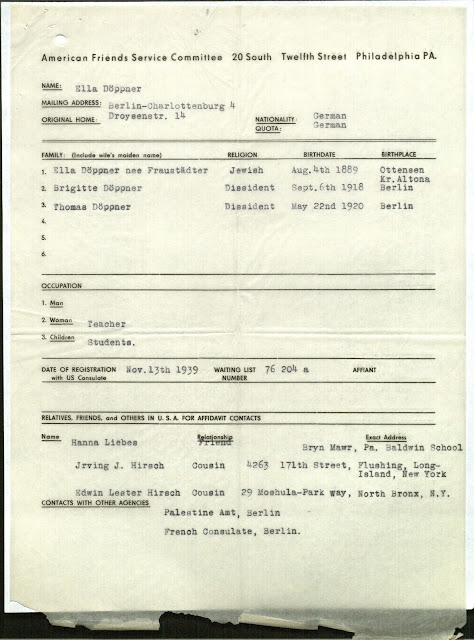 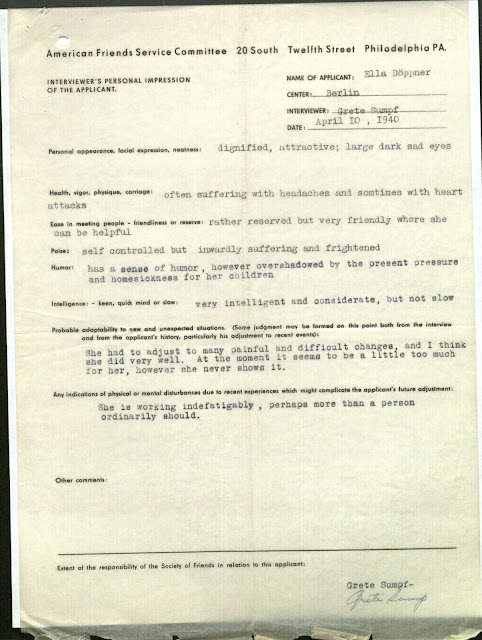 Interviewer's Personal Impression of the Applicant.

Ease in meeting people - friendliness or reserve: rather reserved but very friendly where she can be helpful

Poise: self controlled but inwardly suffering and frightened

Humor: has a sense of humor, however overshadowed by the present pressure and homesickness for her children

Intelligence: -keen, quick mind or slow: very intelligent and considerate, but not slow

Probable adaptability to new and unexpected situations. (Some judgment may be formed on this point both from the interview and from the applicant's history, particularly his adjustment to recent events): She had to adjust to many painful and difficult changes, and I think she did very well. At the moment it seems to be a little too much for her, however she never shows it.

Any indications of physical or mental disturbances due to recent experiences which might complicate the applicant's future adjustment: She is working indefatigably, perhaps more than a person ordinarily should.

Extent of the responsibility of the Society of Friends in relation to this applicant:
Grete Sumpf

This is the most telling document. It tells us perhaps more than many of Ella's letters have told her. This phrase stood out to me especially: "Large dark sad eyes." Here is a picture of Ella that I have as an imprint in my mind when I think of her: 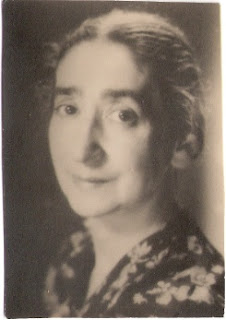 Large, dark, sad eyes. It's the first thing I see when I look at this picture. I went to a sort of conference/book debut for Brené Brown recently, and they had a handful of folks talking about different topics. One of the presentations was done by a pair of sisters who are entrepreneurs and own the company Artifact Uprising. (Look them up! www.artifactuprising.com) They asked an interesting question- they asked- "If you could pick your favorite picture- just one of all of them- which would it be?" They presented the pictures and stories behind the pictures of folks who answered. There were stories of joys and triumphs, but mostly stories of heartache and history. The pictures weren't all perfect quality or of those perfect moments, but rather they showed moments of clarity, of beauty, of joy in the midst of hardship. I surprised myself when I thought of this picture of Ella. I thought about her eyes. There is something about this picture and her eyes that tells me her entire life story.

Ella's anxiety and fear is not hidden from Grete Sumpf's observant eyes. Ella's anxiety has been felt in some of her letters, but she washes the feeling out with her intense love and concern for Opa. Now that we get an outsider's perspective, we see just how burdened Ella is by her loneliness and fear. Ms. Sumpf notes that Ella is working harder than a person should. Yet we know that the work is Ella's shield and protection- she needs the money and the distraction. 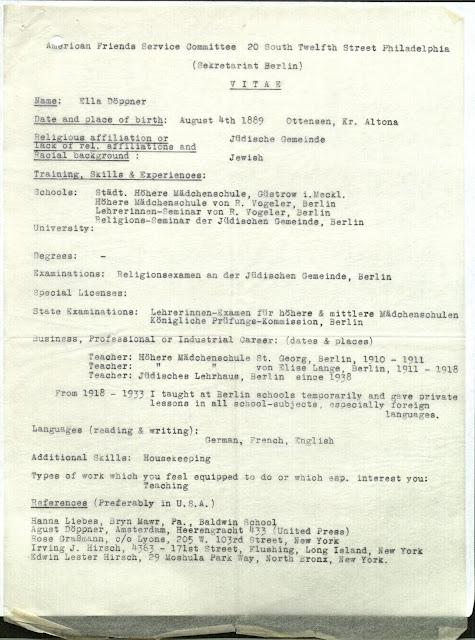 Transcription (this is basically her resumé):

From 1918-1933 I taught at Berlin schools temporarily and gave private lessons in all school-subjects, especially foreign languages.

Types of work which you feel equipped to do or which esp. interest you: Teaching 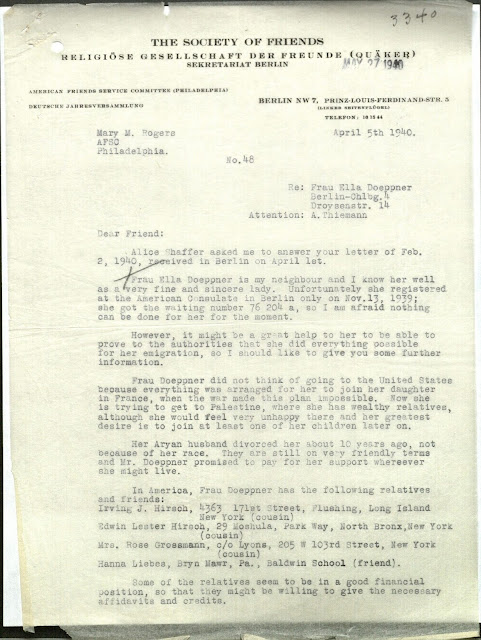 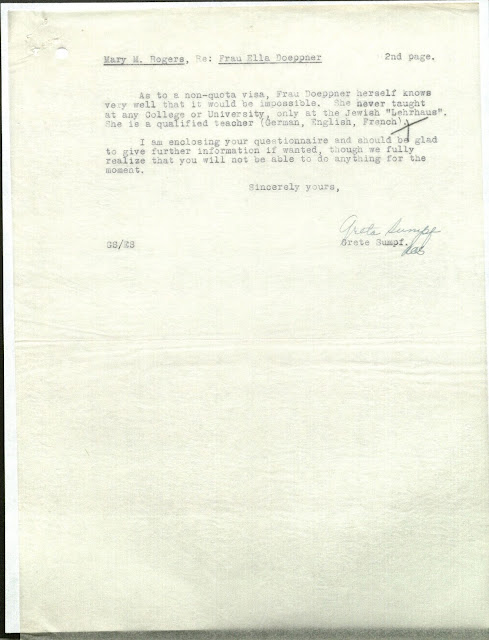 Alice Shaffer asked me to answer your letter of Feb 2, 1940, received in Berlin on April 1st.

Frau Ella Doeppner is my neighbour and I know her well as a very fine and sincere lady. Unfortunately she registered at the American Consulate in Berlin only on Nov. 13, 1939; she got the waiting number 76 204 a, so I am afraid nothing can be done for her for the moment.

However, it might be a great help to her to be able to prove to the authorities that she did everything possible for her emigration, so I should like to give you some further information.

Frau Doeppner did not think of going to the United States because everything was arranged for her to join her daughter in France, when the war made this plan impossible. Now she is trying to get to Palestine, where she has wealthy relatives, although she would feel very unhappy there and her greatest desire is to join at least one of her children later on.

Her Aryan husband divorced her about 10 years ago, not because of her race. They are still on very friendly terms and Mr. Doeppner promised to pay for her support wherever she might live.

Some of the relatives seem to be in a good financial position, so that they might be willing to give the necessary affidavits and credits.

As to a non-quota visa, Frau Doeppner herself knows very well that it would be impossible. She never taught at any College or University, only at the Jewish "Lehrhaus". She is a qualified teacher (German, English, French).

I am enclosing your questionnaire and should be glad to give further information if wanted, though we fully realize that you will not be able to do anything for the moment.

This letter made me think about something a little bit differently than I had before. We learn a very simplified version of World War II and the holocaust in history classes. The more I delve into this history, the more my assumptions are checked and revealed. Sometimes I won't even realize I was thinking about something incorrectly until the facts stand in opposition to what I'm thinking.

That happened in this letter- and it was an ah-ha moment that really should have happened a while ago for me. We learn in history about Jews hiding and have this picture of Germans sort of hunting down the Jews so they can throw them into concentration camps. Almost like they are searching out criminals who deserve to be in jail. There is no escape from within the confines of the German borders. This is true, but not until later. At this point Ella is not hiding. Ella is doing everything she can to get out of Germany. Why? Because the Germans are asking her to get out. The borders to leave are wide open- good riddance. Ella's problem (and every other refugee hopeful) is that there aren't many countries who will welcome the refugee in to their country. Ella isn't trapped in Germany, she's trapped out of the rest of the world. The infamous Wansee Conference where Hitler and his cronies work out the final and systematic "solution" to their perceived problems of Jews among them- this didn't happen until 1942. Until then the method was to scare the Jews away and deport them to Poland or other places- just to get them out of sight. They didn't care what conditions awaited them- they just wanted them out. After the conference they decided to annihilate them systematically- but before that conference, they were just trying to get them out of Germany.

I sat there thinking- all this pressure Ella was feeling- it was two-fold. She was aching to be near her children and away from a regime that hated her. But she was also being told in so many ways that she was undesired and needed to leave as soon as possible.


I am afraid nothing can be done for her for the moment.
However, it might be a great help to her to be able to prove to the authorities that she did everything possible for her emigration, so I should like to give you some further information.

I thought this was about convincing the American Consulate to let Ella over- but Grete just said that she had little hope for that. I think this document is also to help Ella prove to the Nazi's that she is trying to leave- to get out of their hair.

WHY DID EVERYONE TURN THEM AWAY?!?!

We now know why Ella waited to go to get her registration number. She was convinced she'd be able to get to France to Patti. But the war got in the way and she scrambled to try another way. Palestine is perhaps a viable option but Ella would be unhappy. I think part of that might be because it is her side of the family that is also connected to Emma (her cousin who married her ex-husband). Perhaps there was some real tension there.

I'm sort of in despair after reading this letter. It's about as honest as we've seen- it is clear that Grete Sumpf sees very little hope for Ella to get to the USA, and perhaps anywhere.

How difficult it must have been for Grete Sumpf to think that, know that, and look into those large, dark, sad eyes.
Posted by Sarah Snow at Tuesday, September 01, 2015