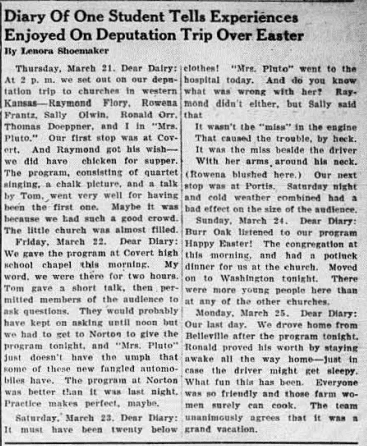 Thursday, March 21. Dear Diary: At 2 p. m. we set out on our deputation trip to churches in western Kansas - Raymond Flory, Rowena Frantz, Sally Olwin, Ronald Orr, Thomas Doeppner, and I in "Mrs. Pluto." Our first stop was at Covert. And Raymond got his wish - we did have chicken for supper. The program, consisting of quartet singing, a chalk picture, and a talk by Tom, went very well for having been the first one. Maybe it was because we had such a good crowd. The little church was almost filled.
Friday, March 22. Dear Diary: We gave the program at Covert high school chapel this morning. My word, we were there for two hours. Tom gave a short talk, then permitted members of the audience to ask questions. They would probably have kept on asking until noon but we had to get to Norton to give the program tonight, and "Mrs. Pluto" just doesn't have the ump that some of these new fangled automobiles have. The program at Norton was better than it was last night. Practice makes perfect, maybe.
Saturday, March 23, Dear Diary: It must have been twenty below clothes! "Mrs. Pluto" went to the hospital today. And do you know what was wrong with her? Raymond didn't either, but Sally said that
It wasn't the "miss" in the engine
That caused the trouble, by heck.
It was the miss beside the driver
With her arms around his neck.
(Rowena blushed here.) Our next stop was at Ports, Saturday night and cold weather combined had a bad effect on the size of the audience.
Sunday, March 24. Dear Diary: Burr Oak listened to our program. Happy Easter! The congregations at this morning, and had a potluck dinner for us at the church. Moved on to Washington tonight. There were more young people here than at any of the other churches.
Monday, March 25. Dear Diary: Our last day. We drove home from Belleville after the program tonight. Ronald proved his worth by staying awake all the way home - just in case the driver might get sleepy. What fun this has been. Everyone was so friendly and those farm women surely can cook. The team unanimously agrees that it was a grand vacation.

This article from The Spectator is a fun little glimpse into some of the activities that Opa got involved in. In this case, he was a show on the road. He gave a talk in various towns around Kansas, I'm not sure what it was about, but I assume something to do with Germany. I love that his most enthusiastic listeners were the high school students, who asked questions until they had to leave. I would love to know what their questions must have been. Wouldn't it be fun to talk to one of those high school students now? I wonder if it left a lasting impression on any of them, if they had a different idea of who and what Germany was because of Opa's talk.

There are certain things that stick out to me from my youth. Certain people that I met even briefly, but who put a face on an issue that I hadn't thought much about. I remember in particular, a woman who visited the hotel I worked at in college. She was visiting as a spokesperson for the displaced people of Palestine. She was giving a talk at the University, but when I checked her into the hotel and made the usual small talk, she told me her story. Since then I remember her, I remember her pamphlet, and I remember that every story has many sides. She made an impression on me that changed the way I hear news about Israel and Palestine. It gave it more nuance. I'm grateful for that chance encounter.

I did a little search on the map of Kansas and these guys were really all over the place. they sort of did a box of middle Kansas, going west then north west before cutting across to the East a bit before they headed back south to McPherson. Poor little "Mrs. Pluto" haha. I loved that the author used the phrase "new fangled." There is something about that phrase that makes you just sort of love the speaker of it.

So a day in the life of Opa (or rather a short trip in the life)- I imagine he was shocked to see that the rest of Kansas was also flat. If he could just go a little further west, he could see the Rockies.