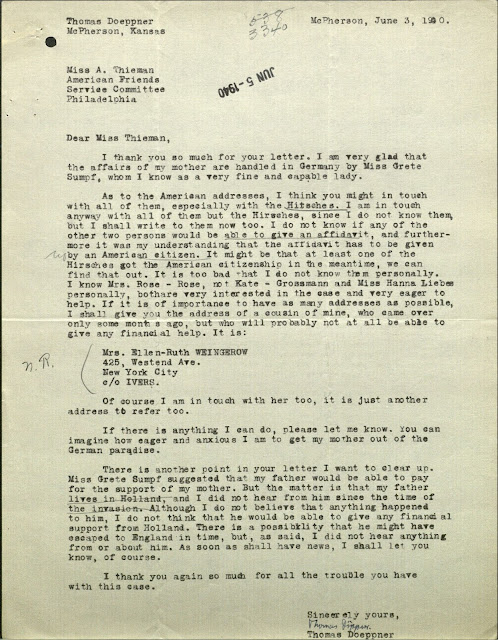 Letter from Opa to Miss Thieman

I thank you so much for your letter. I am very glad that the affairs of my mother are handled in Germany by Miss Grete Sumpf, whom I know as a very fine and capable lady.

As to the American addresses, I think you might in touch with all of them, especially with the Hirsches. I am in touch anyway with all of them but the Hirsches, since I do not know them, but I shall write to them now too. I do not know if any of the other two persons would be able to give an affidavit, and furthermore it was my understanding that the affidavit has to be given by an American citizen. It might be that at least one of the Hirsches got the American citizenship in the meantime, we can find that out. It is too bad that I do not know them personally. I know Mrs. Rose - Rose, not Kate- Grossman and Miss Hanna Liebes personally, both are very interested in the case and very eager to help. If it is of importance to have as many addresses as possible, I shall give you the address of a cousin of mine, who came over only some months ago, but who will probably not at all be able to give any financial help. It is:
Mrs. Ellen-Ruth Weingerow
425, Westend Ave.
New York City
c/o Ivers.

Of course I am in touch with her too, it is just another address to refer too.

If there is anything I can do, please let me know. You can imagine how eager and anxious I am to get my mother out of the German paradise.

There is another point in your letter I want to clear up. Miss Grete Sumpf suggested my father would be able to pay for the support of my mother. But the matter is that my father lives in Holland, and I did not hear from him since the time of the invasion. Although I do not believe that anything happened to him, I do not think that he would be ablate give any financial support from Holland. There is a possibility that he might have escaped to England in time, but, as I said, I did not hear anything from or about him. As soon as shall have news, I shall let you know, of course.

I thank you again so much for all the trouble you have with this case.

Opa amazes me. He is twenty going on forty. Or sixty five. The grace and maturity that he handles this information and responsibility is beyond what I can imagine for myself at twenty. Maybe I don't give my twenty year old self enough credit- but Opa is on the ball and not shying away from doing what he can to help his mother. He doesn't get defeated and he keeps pushing on even though he has likely seen the writing on the wall about his mother's chance of coming to America.

He shows that he has actually been in touch with all of the people that Ella keeps nagging him to be in touch with- even Ellenruth. We don't get to read his responses to Ella, so we just assume he's slacking like any other college kid would. But he isn't. I love how he begrudgingly gives Ellenruth's contact. And it appears he might know better than his mother what Ellenruth's name and address are- his is more detailed that Ella's updated address she gave him. Plus he wouldn't have gotten Ella's update- so that means he is already in touch with Ellenruth.

Opa even has enough fortitude to make a sarcastic remark when he jokes that he is very anxious to get his mother out of the "German Paradise."

You can tell that Opa has not received news from anyone since the Nazi invasion of the Netherlands and France, as Patti and Ella's letters about their safety and August's safety has not reached him. Opa was wise to discern that his father would no longer be able to support Ella (and perhaps never could have) and to let the folks at the American Friends Service Committee (AFSC) know.

I think it's interesting that he and Patti thought that August might have escaped before the invasion... I wonder if August had a plan to escape that was more concrete than just noticing the incoming soldiers and dashing for the English Channel.

I want to make a note that Jason did a little searching and figured out that August and Emma's home was just around the corner (10 minutes?) from the location where Anne Frank and her family hid later in the war. I think that this is important for us to keep in perspective as we keep going in these letters.

I have this phenomenon that I'm sure is shared with many others- where the stories of others in peril somehow can't possibly intersect with my family. Anne Frank- I believe that she was in danger when her family went into hiding. But somehow I have this naive belief that Ella, August, Patti- they are all somehow encased in some bubble of protection. That the bad stuff all around them isn't really affecting them as much. And it's partially their fault I have this ridiculous idea. In all their letters they only talk about the good stuff, or they keep it simple and surface. They are protecting each other. And finally- isn't it true that when we're in the midst of surviving something- part of our fortitude comes from denying the depth of how horrible it is? We assume that since we're surviving- it isn't the worst that could happen.

So Ella is stuck in Berlin. August is stuck in Amstelveen, Patti is stuck in France, and Opa is helpless in America. But what do we see? Opa doing all that he can to give his mother a chance - even a tiny one- to get out. And he is grateful to everyone who helps. Because after all- he was also a hopeless case that somehow got to the United States. Hope doesn't have to be big to fuel us.