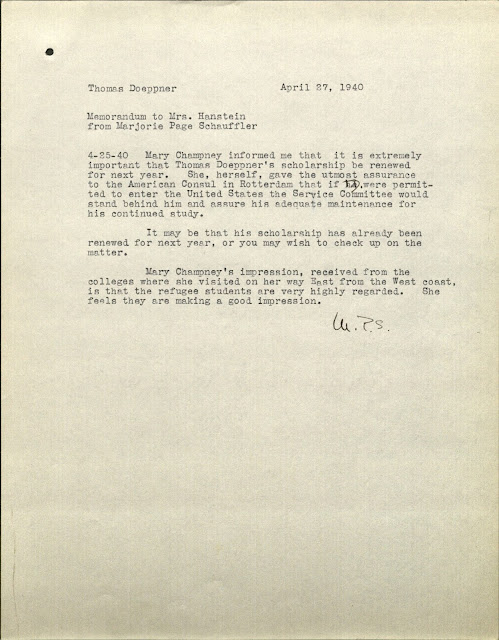 4-25-40  Mary Champney informed me that it is extremely important that Thomas Doeppner's scholarship be renewed for next year. She, herself, gave the utmost assurance to the American Consul in Rotterdam that if TD were permitted to enter the United States the Service Committee would stand behind him and assure his adequate maintenance for his continued study.

It may be that his scholarship has already been renewed for next year, or you may wish to check up on the matter.

Mary Champney's impression, received from the colleges where she visited on her way East from the West coast, is that the refugee students are very highly regarded. She feels they are making a good impression. 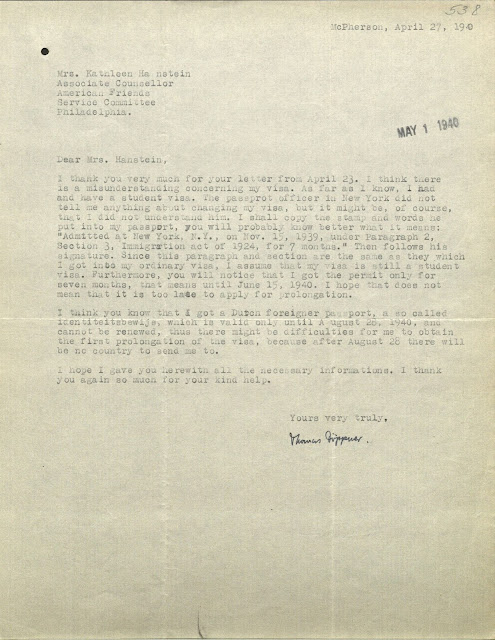 I thank you very much for your letter from April 23. I think there is a misunderstanding concerning my visa. As far as I know, I had and have a student visa. The passport officer in New York did not tell me anything about changing my visa, but it might be, of course, that I did not understand him. I shall copy the stamp and words he put into my passport, you will probably know better what it means: "Admitted at New York, N.Y., on Nov. 15, 1939, under Paragraph 2, Section 3, Immigration act of 1924, for 7 months." Then follows his signature. Since this paragraph and section are the same as they which I got into my ordinary visa, I assume that my visa is still a student visa. Furthermore, you will notice that I got the permit only for seven months, that means until June 15, 1940. I hope that does not mean that it is too late to apply for prolongation.

I think you know that I got a Dutch foreigner passport, also called identiteitsbewijs, which is valid only until August 28, 1940, and cannot be renewed, thus there might be difficulties for me to obtain the first prolongation of the visa, because after August 28 there will be no country to send me to.

I hope I gave you herewith all the necessary information, I thank you again so much for your kind help.

These two letters  are unrelated except that they are both to Mrs. Hanstein about Opa's stay in the USA. The first one is sort of a heads up from someone in the field who wants to make sure Mrs. Hanstein knows that Opa needs another year of scholarship. Mary Champney reports that the refugee students are doing well and people think highly of them. I think this is important to note, especially as Germans have a mixed response from the US at this time- and in time all villains will have German accents.

The second letter is from Opa himself, attempting to clear up the visa question. It seems to complicate things. He thinks he has a student visa- and it makes sense why since his visa is stamped with the same information he saw in his other forms. How ridiculously impossible is that stamp from the passport officer?! Could they not simplify and say "Student Visa" or "Visitor's Visa"?? It seems like a big stamp and a lot of words.

I love how Opa lists his whole visa situation: his visa is set to expire in a month and a half, he thinks it's a student visa, his identification papers/passport is a temporary one from Holland which expires in August. After August- he is without a country to be sent home to- so there may be some trouble getting his visa renewed (the one that expires in a month and a half). Then he thanks Mrs. Hanstein for her help and hopes he gave her what she needed to work visa miracles.

I am pretty sure Opa saw how tenuous his stay in America was, but I wonder if he was that nervous about it. He doesn't seem to be frantic. Is he secretly hoping he'll have to go back to Holland? Does he sort of wish to be back near his family? Or is he just really optimistic about the abilities of the AFSC?

Who knows, but the visa questions continue, and pretty soon- Opa is going to be a man without a country.
Posted by Sarah Snow at Wednesday, September 09, 2015