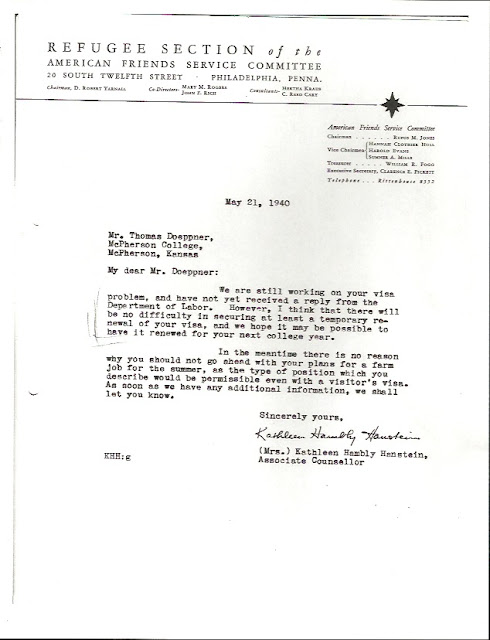 Letter From Kathleen Hambly Hanstein of AFSC to Opa

We are still working on your visa problem, and have not yet received a reply from the Department Labor. However, I think that there will be no difficulty in securing at least a temporary renewal of your visa, and we hope it may be possible to have it renewed for your next college year.

In the meantime there is no reason why you should not go ahead with your plans for a farm job for the summer, as the type of position which you describe would be permissible even with a visitor's visa. As soon as we have any additional information, we shall let you know. 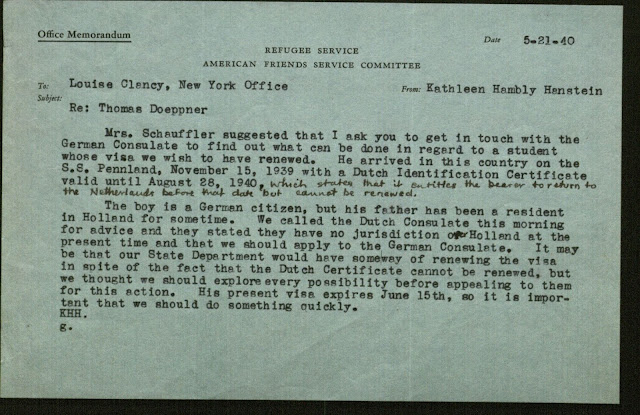 Memorandum in AFSC from Kathleen Hambly Hanstein to Louise Clancy

Mrs. Schauffler suggested that I ask you to get in touch with the German Consulate to find out what can be done in regard to a student whose visa we wish to have renewed. He arrived in this country on the S.S. Penn land, November 15, 1939 with a Dutch Identification Certificate valid until August 28, 1940, which states that is entitles the bearer to return to the Netherlands before that date but cannot be renewed.

The boy is a German citizen, but his father has been a resident in Holland for sometime. We called the Dutch Consulate this morning for advice and they stated they have no jurisdiction over Holland at the present time and that we should apply to the German Consulate. It may be that our State Department would have some way of renewing the visa in spite of the fact that the Dutch Certificate cannot be renewed, but we thought we should explore every possibility before appealing to them for this action. His present visa expires June 15th, so it is important that we should do something quickly. 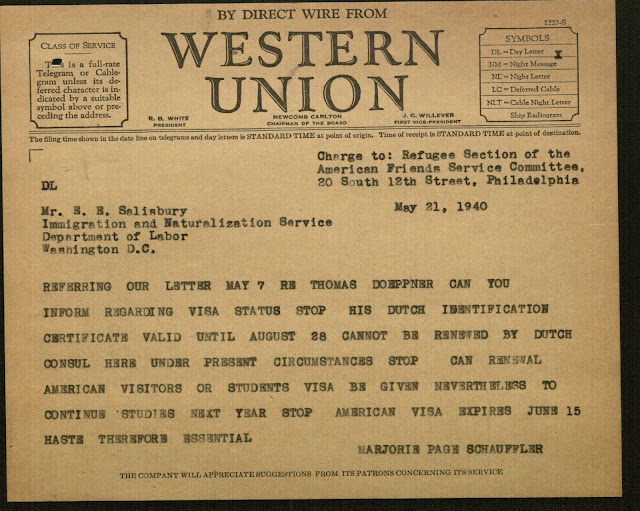 Telegram from Majorie Page Schauffler of AFSC to Mr. E. E. Salisbury of the INS 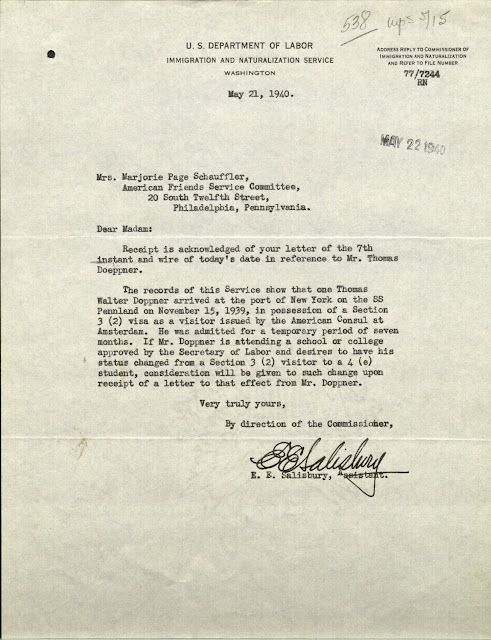 Letter from E. E. Salisbury of the INS to Marjorie Page Schauffler of AFSC

Receipt is acknowledged of your letter of the 7th instant and wire of today's date in reference to Mr. Thomas Doeppner.

The records of this Service show that one Thomas Walter Doeppner arrived at the port of New York on the SS Pennland on November 15, 1939, in possession of a Section 3 (2) visa as a visitor issued by the American Consul at Amsterdam. He was admitted for a temporary period of seven months. If Mr. Doeppner is attending a school or college approved by the Secretary of Labor and desires to have his status changed from a Section 3 (2) visitor to a 4 (e) student, consideration will be given to such change upon receipt of a letter to that effect from Mr. Doppner.

Very truly yours,
By direction of the Commissioner,
E. E. Salisbury, Assistant.

If you read these letters from top to bottom- you sort of see the thread of information and increased urgency as the INS hasn't responded. Finally Mr. E. E. Salisbury responded- and it really isn't entirely helpful. I guess at best it is hopeful and gives the next step: If Opa wants a student visa he needs to write a letter to the INS asking for one.

I think that this development shows a few things: you can be right on top of things and it still sneaks up on you. This conversation began months ago, but the lack of clear information has dragged the process on. The INS representative responds after he gets a telegram - and it's sort of funny because he almost seems annoyed when he writes that he got both the letter AND the telegram. Ha- but those AFSC folks are persistent! They are always ahead of the game, so they don't like it when someone slows them down.

It sounds like- at this moment- Opa is safe to take the farm job even if it isn't the most lucrative option. It seems like he also isn't in any immediate danger of being kicked out of the country. It's sort of ironic that after all this back and forth with the AFSC as the liaison to the INS- the solution is for Opa to write a letter. We'll see how that goes.