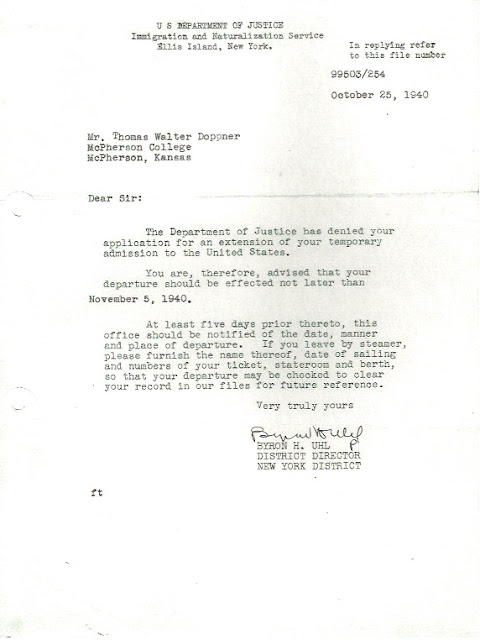 Letter from Byron Uhl of INS to Opa

The Department of Justice has denied your application for an extension of your temporary admission to the United States.

You are, therefore, advised that your departure should be effected not later than November 5, 1940.

At least five days prior thereto, this office should be notified of the date, manner and place of departure. If you leave by steamer, please furnish the name thereof, date of sailing and numbers of your ticket, stateroom and berth, so that your departure may be checked to clear your record in our files for future reference.

You know the sound of a record scratch that you hear in the movies or silly sitcoms when something completely halts all forward progress? I hear it now. When Opa read this letter... what did he hear? Did his stomach drop? Did he feel a tightening in every muscle, up into his heart, alerting him to the impending possibility of danger? Did he read it several times over, just to make sure he was reading the right thing?  Did he feel his hands start to tremble, and his legs start to shake? I cannot fathom the fear, the dread, the anxiety that had to have come with this short and ridiculous letter. "Leave by November 5, 1940! -Very truly yours!" How? How could he be denied? Just a week ago he got letters of confirmation that all would be well- from a source at the INS! What is going on here?!?!?! 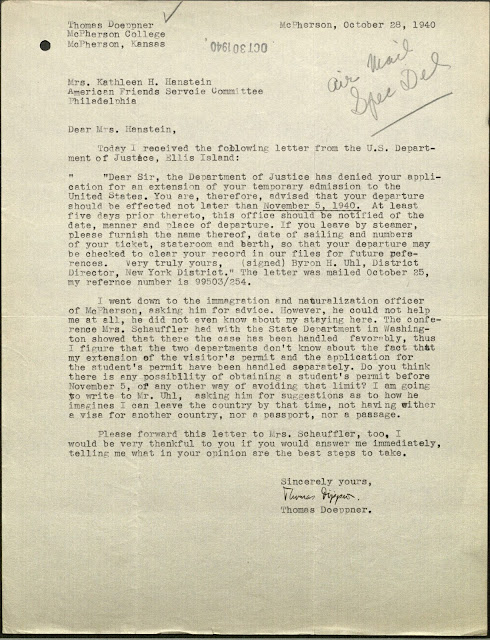 Letter from Opa to Mrs. Hanstien at AFSC

Today I received the following letter from the U.S. Department of Justice, Ellis Island:

The Department of Justice has denied your application for an extension of your temporary admission to the United States.

You are, therefore, advised that your departure should be effected not later than November 5, 1940.

At least five days prior thereto, this office should be notified of the date, manner and place of departure. If you leave by steamer, please furnish the name thereof, date of sailing and numbers of your ticket, stateroom and berth, so that your departure may be checked to clear your record in our files for future reference. Very truly yours, Byron H. Uhl District Director, New York District." The letter was mailed October 25, my reference number is 99503/254.

I went down to the immigration and naturalization officer of McPherson, asking him for advice. However, he could not help me at all, he did not even know about my staying here. The conference Mrs. Schauffler had with the State Department in Washington showed that there the case has been handled favorably, thus I figure that the two departments don't know about the fact that my extension of the visitor's permit and the application for the student's permit have been handled separately. Do you think there is any possibility of obtaining a student's permit before November 5, of any other way of avoiding that limit? I am going to write to Mr. Uhl, asking him for suggestions as to how he imagines I can leave the country by that time, not having either a visa for another country, nor a passport, nor a passage.

Please forward this letter to Mrs. Schauffler, too. I would be very thankful to you if you would answer me immediately, telling me what in your opinion are the best steps to take.

I cannot even imagine Opa's fear, but what really shines through in this letter is his pure frustration and annoyance. He shares with Mrs. Hanstein his letter doom. Then he tells her he went to the local Immigration and naturalization officer in McPherson (guys- I have been to McPherson- this HAD to be a VERY part time job)- and this guy didn't even know Opa existed, much less how to help him. Opa talks about Mrs. Schauffler's supposed amazing conference were everything was to be A-OK. Then he wonders to Mrs. Hanstein- where the INS seems to think he should be able to go without a passport or a boat ticket? Of course I'm sure the ships to Europe were having a sale on tickets.

Opa's ultimate request: what should I do?!?! 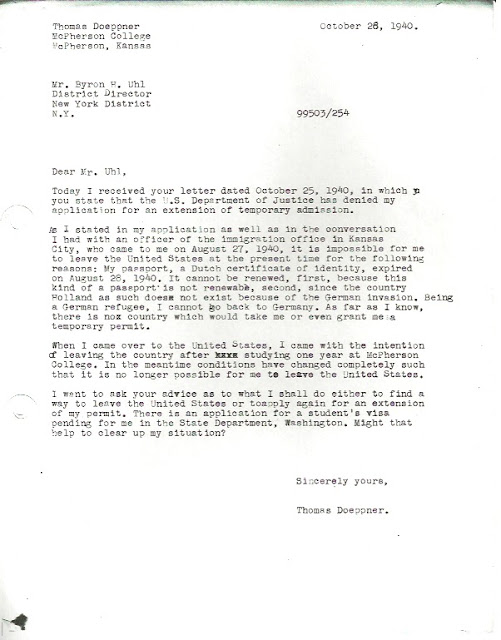 Letter to Mr. Uhl of INS from Opa

Today I received your letter dated October 25, 1940, in which you state that the U.S. Department of Justice has denied my application for an extension of temporary admission.

As I stated in my application as well as in the conversation I had with an officer of the immigration office in Kansas City, who came to me on August 27, 1940, it is impossible for me to leave the United States at the present time for the following reasons: My passport, a Dutch certificate of identity, expired on August 28, 1940. It cannot be renewed, first, because this kind of passport is not renewable, second, since the country Holland as such does not exist because of the German invasion. Being a German refugee, I cannot go back to Germany. As far as I know, there is no country which would take me or even grant me a temporary permit.

When I came over to the United States, I ca e with the intention of leaving the country after studying one year at McPherson College. In the meantime conditions have changed completely such that it is no longer possible for me to leave the United States.

I want to ask your advices to what I shall do either to find a way to leave the United States or to apply again for an extension of my permit. There is an application for a student's visa pending for me in the State Department, Washington. Might that help to clear up my situation?

This is Opa's mic drop. He basically says- how in the hell do you imagine I leave by November 5th without passage, a passport, or a country to go to? Opa pulls out the refugee  card, which he hasn't done much in the past because it doesn't actually help you get in the country- but in this case he's hoping it'll help him stay in the country. Opa's letter is specific, informative, and a little snarky. I love it.

So..... where does he go from here? November 5th is eight days away.