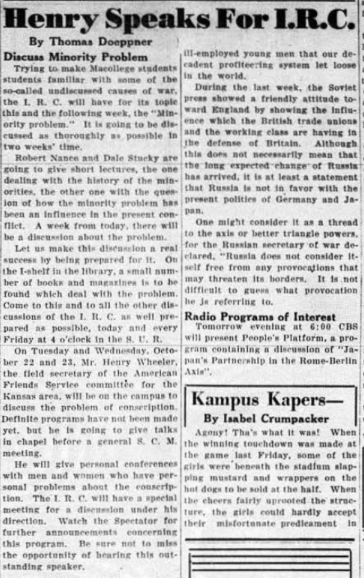 Article about International Relations Club in the Spectator by Opa

Trying to make Macoleg students familiar with some the the so-called undiscussed causes of war, the I.R.C. will have for its topic this and the following week, the "Minority problem." It is going to be discussed as thoroughly as possible in two weeks' time.

Robert Nance and Dale Stucky are going to give short lectures, the one dealing with the history of the minorities, the other one with the question of how the minority problem has been an influence in the present conflict. A week from today, there will be a discussion about the problem.

Let us make this discussion a real success by being prepared for it. On the I-shelf in the library, a small number of books and magazines is to be found which deal with the problem. Come to this and all other discussions of the I.R.C. as well prepared as possible, today and every Friday at 4 o'clock in the 8. U.R.

On Tuesday and Wednesday, October 22 and 23, Mr. Henry Wheeler, the field secretary of the American Friends Service committee for the Kansas area, will be on the campus to discuss the problem of conscription. Definite programs have not been made yet, but he is going to give talks in chapel before a general 8. C.M. meeting.

He will give personal conferences with men and women who have personal problems about the conscription. The I.R.C. will have a special meeting for a discussion under his direction. Watch the Spectator for further announcements concerning this program. Be sure not to miss the opportunity of hearing this outstanding speaker.

...ill-employed young men that our decadent profiteering system let loose in the world.

During the last week, the Soviet press showed a friendly attitude toward England by showing the influence which the British trade unions and the working class are having in the defense of Britain. Although this does not necessarily mean that the long expected change of Russia has arrived, it is at least a statement that Russia is not in favor with the present policies of Germany and Japan.

One might consider it as a thread to the axis or better triangle powers, of the Russian secretary of war declared, "Russia does not consider itself free from any provocations that may threaten its border." It is not difficult to guess what provocation he is referring to.

Tomorrow evening at 6:00 CBS will present People's Platform, a program containing a discussion of "Japan's Partnership in the Rome-Berlin Axis."

Once again, I miss college. And I did not take full advantage of my education. Sigh. I love that the International Relations Committee (I.R.C.) is fostering conversations that are informed with provided reading material (how fabulous is that?!). I wonder what minorities were being mentioned here? If they are discussing the war, were they speaking of the anti-semitic rhetoric found in Germany and everywhere? I wish I could have attended the discussion and read the materials!

The reference to Russia reminds me that Russia is always a fickle friend or foe.

This calls me to do better with my self-education.  Prepare. Read. Discuss.
Posted by Sarah Snow at Saturday, November 21, 2015