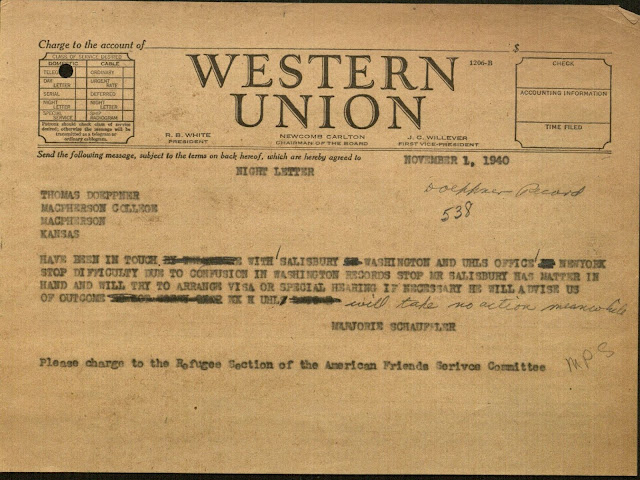 Telegram from Marjorie Schauffler of AFSC to Opa

Transcription (of telegram above and below - two copies): 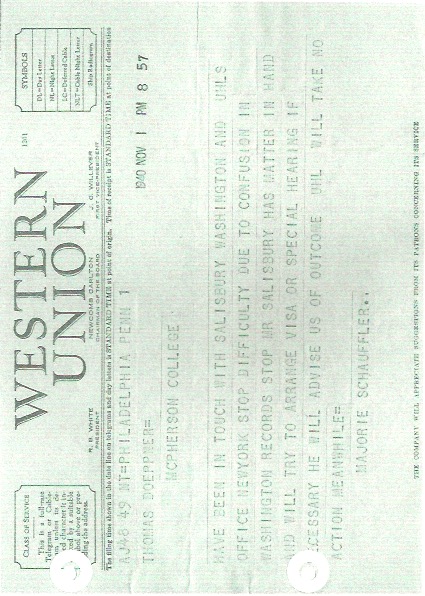 Copy 2 of Telegram from Marjorie Schauffler to Opa 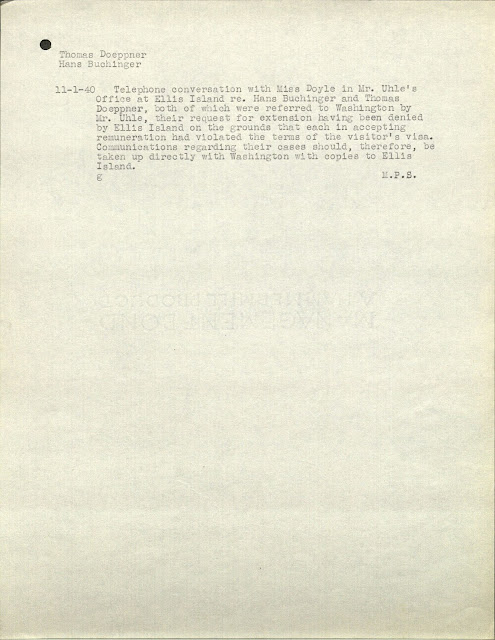 11-1-1940  Telephone conversation with Miss Doyle in Mr. Uhle's Office at Ellis Island re. Hans Buchinger and Thomas Doeppner, both of which were referred to Washington by Mr. Uhle, their request for extension having been denied by Ellis Island on the grounds that each in accepting renumeration had violated the terms of the visitor's visa. Communications regarding their cases should, therefore, be taken up directly with Washington with copies to Ellis Island.
M.P.S. 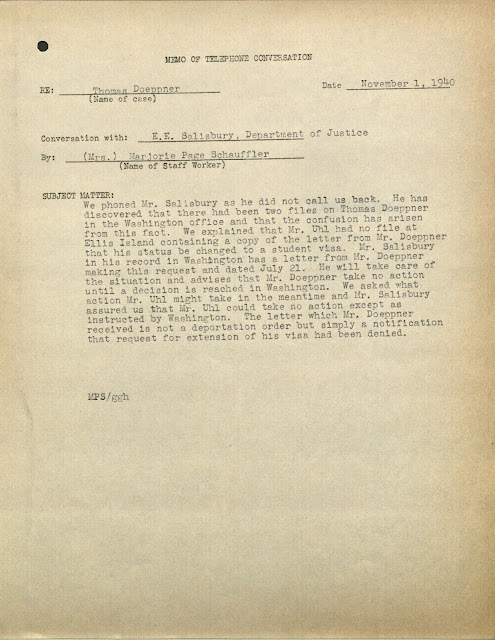 Memo of Phone Conversation between Marjorie Schauffler of AFSC
and Mr. Salisbury of INS

We phoned Mr. Salisbury as he did not call us back. He has discovered that there had been two files on Thomas Doeppner in the Washington office and that the confusion has arisen from this fact. We explained that Mr. Uhl had no file at Ellis Island containing a copy of the letter from Mr. Doeppner that his status be changed to a student visa. Mr. Salisbury in his record in Washington has a letter from Mr. Doeppner making this request and dated July 21. He will take care of the situation and advises that Mr. Doeppner take no action until a decision is reached in Washington. We asked what action Mr. Uhl might take in the meantime and Mr. Salisbury assured us that Mr Uhl could take no action except as instructed by Washington. The letter which Mr. Doeppner received is not a deportation order but simply a notification that request for extension of his visa had been denied.

Thank GOD the AFSC is on Opa's side! What a royal mess! If you read through all the documents, it looks like the whole issue boils down to a filing error. There are two files for Opa in Washington, one is controlled by the mean Mr. Uhl who denied him, and the other by the nice Mr. Salisbury, who the AFSC are in conversation with. There should not be duplicate files, which is why Opa felt like he had to tell everyone his requests twice- because that's exactly what he was doing. It is amazing how little details like his request for the Student visa and the connection Mr. Salisbury had with the AFSC really does make a difference. You see almost a perfect double blind experiment here - Opa's story could have gone two very different ways.

Luckily it seems that Opa is safe to stay and Mr. Salisbury is going to work out the confusion that is his two files. (But seriously, how many Doeppner's are there in America? I'm related to all of the ones I've met.) I love that the letter that tells Opa to leave in five days is not a deportation notice. You can see how someone who didn't have help like the AFSC could have been completely lost in the web of immigration papers. You could have been deported for having the wrong guy look at the wrong file. It is so grey, so arbitrary, so ambiguous.

I am reminded time and again how very hard it was to come to the United States, and how miraculous/lucky/blessed/fortunate Opa was to have somehow continually slipped through the loopholes and land with his feet still on American soil.