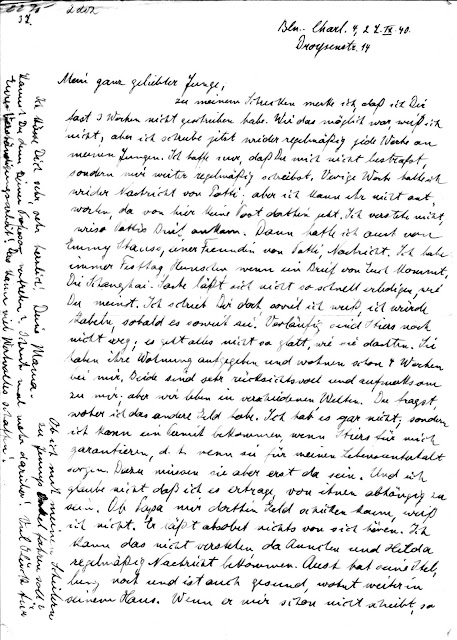 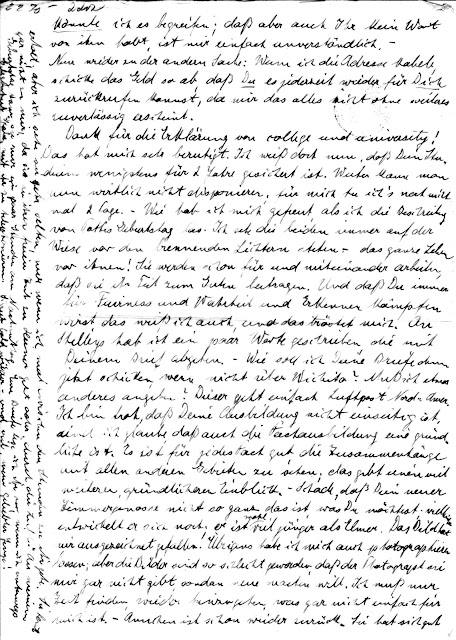 To my fright (Horror) I noticed that I have not written to you for 3 weeks. I don’t know how that was possible, but now I will write to my boy regularly every week. I just hope you will not punish me for this and continue to write regularly. Last week I heard from Patti again but I cannot reply because no mail goes from here to there. I don’t understand how Patti’s letter got here. I also heard from Emmy Stause, a friend of Patti’s. It is always a holiday Hunschen when mail from both of you arrives. The Shanghai situation cannot be settled as quickly as you think. I wrote to you as I recall, that I would send a cable, as soon as it is time. In the meantime Stiers have not left yet. Things are not going as smoothly as they thought. They gave up their flat and are living with me for 4 weeks already. Both are very considerate and attentive to me, but we do live in different worlds. You ask, where did I get the other money? I do not have it, but I can get a permit when the Stiers will be my guarantors, which means will be responsible for my living expenses. But for all that, they have to be there yet. And I don’t think I could bear it to be totally dependent on them. I don’t know if Papa can send me money to there. He absolutely does not let me hear from him. I don’t understand that, especially since Anchen and Hilda receive mail regularly. Aust has his job, he is healthy as well, and continues to live in his house. Even if he does not write to me, I could understand that, but that also both of you do not hear a word from him, is absolutely not understandable to me.

Now back to another thing. When I do have an address send the money in a way, so you can have it sent back to you at any time, since everything does not appear so dependably to.

Thank you for the explanation about college and university. It has calmed me down, because now I know that your studies are secured for the next 2 years. Right now one cannot plan for now, for me only for 2 days. How happy I was to read the description of Patti’s birthday. I can see the two of them standing on the meadow in front of the burning candles, their whole life in front of them. They will work together to contribute their part for the good. And that you will always fight for Fairness, Truth, and Knowledge also and it comforts me. I wrote a few lines to the Shelley's, which will be sent alongside with your letter. How am I to send your letters now, not over Wichita? Do I have to show something else? This one will go just by airmail, North-America.

I am happy that your education is not one-sided, and I believe that the special education is very thorough. It is good for all fields to understand the connection with all other ones, which will give one an additional thorough insight. Too bad that your new room-mate is not quite the way you would like, perhaps he will develop, he must be much younger than Elmer.

I really liked the picture. By the way I had a photo made of me, but they turned out so badly, that the photographer won’t give them to me, but will make new ones. I just have to find the time to go back, which is not easy for me. Anchen is back already. She has recovered nicely, but I see her very seldom, only if I go to her between lessons. She never comes to see me, because in her free time she goes to see Heiner. I read your letters to her…. …… to telephone her.

Write soon and lots, my beloved boy.
I kiss you much and with lots of love
Your Mama

Written in the side of the letter:
Should I travel to Jenny’s uncle with my students?
Can you stand in for your professor?
Write more about that.
Much luck with your “communication work”.
One can gain much valuable knowledge

Ella's slacking on the letter writing! This seems odd to me- very unlike her. I wonder if having the Stiers in her home makes her more distracted and busy - like she can't sit in quiet and write a letter with her sister and brother-in-law sitting there. I could see Ella not wanting to be rude and then realizing she hasn't found a time when they weren't there. The Stiers have been with her about a month now- they have invested everything into this Shanghai plan and it isn't going as smoothly as they hoped. I hate to sound pessimistic but this Shanghai plan never sounded all that solid to begin with. The current plan is that the Stiers will travel to Shanghai and establish some sort of residency- which will then allow them to be sponsors for Ella to come. This is similar to the longer plan that Opa has for his mother to hopefully come to him- but the fact is that even if he were able to secure an affidavit for her- she is still miserably far behind in the line to get a visa to travel to the US. Shanghai- as sketchy as it sounds- remains her only option at this point.

Ella wonders again why August doesn't write to her or to the kids- especially when it seems he is able to write to Annchen (his sister) and Hilda. I am just as dumbfounded. I just assumed that he had no communications with anybody. I could even understand him not writing to Ella (not kindly, but perhaps as protection for himself because she is Jewish). But not writing to his son in America seems really odd. Not writing to Patti might be a protective thing for Patti- so that she does not appear to be German, but instead blends in as French. Not writing to Opa is something I can't figure out. I don't really get it. I want to give August the benefit of the doubt and assume he has very valid reasons for not writing. As someone who was part of the news business- maybe he knows something we don't. August has lost his news job- but he still lives in his home.

Ella seems to be happy with Opa's schooling- the fact that he gets to have varied courses that provide him a well-rounded education. Opa's freedom gives Ella so much hope. It's sweet to see how much faith she has in him.

The side note makes absolutely no sense so I can only imagine that it is code for something. What is she asking him? We know so much, and yet there are still so many names and riddles in these letters that we don't understand.
Posted by Sarah Snow at Thursday, November 19, 2015