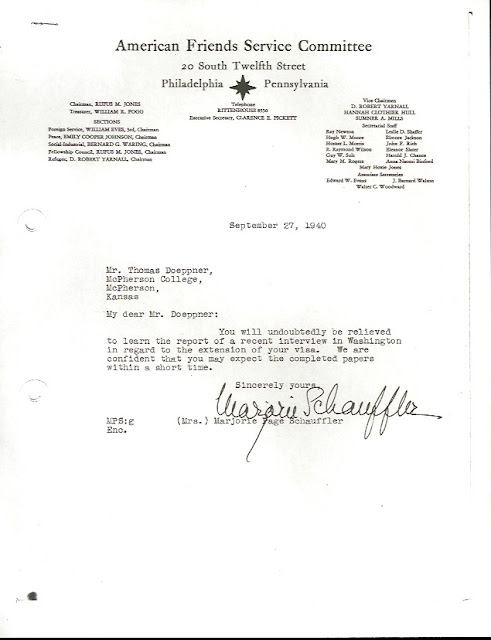 Letter from Marjorie Schauffler to Opa

You will undoubtedly be relieved to learn the report of a recent interview in Washington in regard to the extension of your visa. We are confident that you should expect the completed papers within a short time. 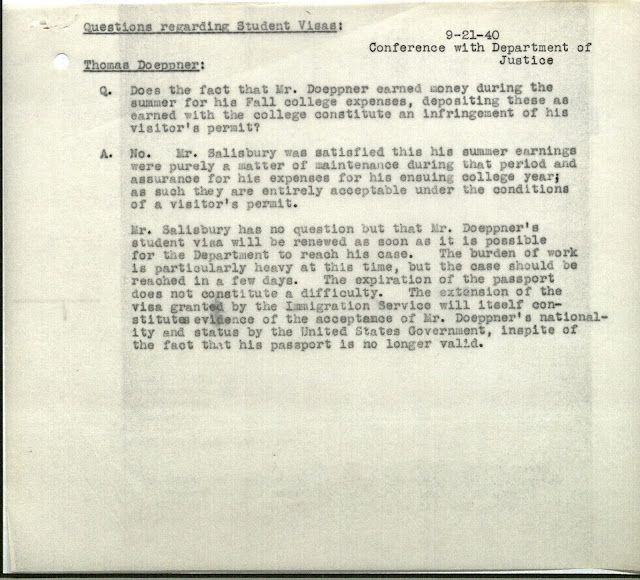 Information from Conference with Department of Justice

9-21-40
Conference with Department of Justice

Thomas Doeppner:
Q: Does the fact that Mr. Doeppner earned money during the summer for his Fall college expenses, depositing these as earned with the college constitute an infringement of his visitor's permit?

A: No. Mr. Salisbury was satisfied this his summer earnings were purely a matter of maintenance during that period and assurance for his expenses for his ensuing college year; as such they are entirely acceptable under the conditions of a visitor's permit.


Mr. Salisbury has no question but that Mr. Doeppner's student visa will be renewed as soon as it is possible for the Department to reach his case. The burden of work is particularly heavy at this time, but the case should be reached in a few days. The expiration of the passport does not constitute a difficulty. The extension of the visa granted by the Immigration Service will itself constitute evidence of the acceptance of Mr. Doeppner's nationality and status by the United States Government, inspite of the fact that his passport is no longer valid. 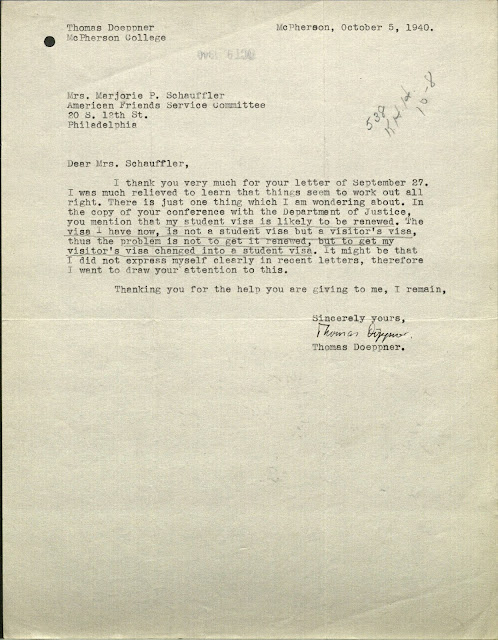 Letter from Opa to Marjorie Schauffler

I thank you very much for your letter of September 27. I was much relieved to learn that things seem to work out all right. There  is just one thing which I am wondering about. In the copy of your conference with the Department of Justice, you mention that my student visa is likely to be renewed. The visa I have now, is not a student visa but a visitor's visa, thus the problem is not to get it renewed, but to get my visitor's visa changed into a student visa. It might be that I did not express myself clearly in recent letters, therefore I want to draw your attention to this.

Thanking you for the help you are giving to me, I remain, 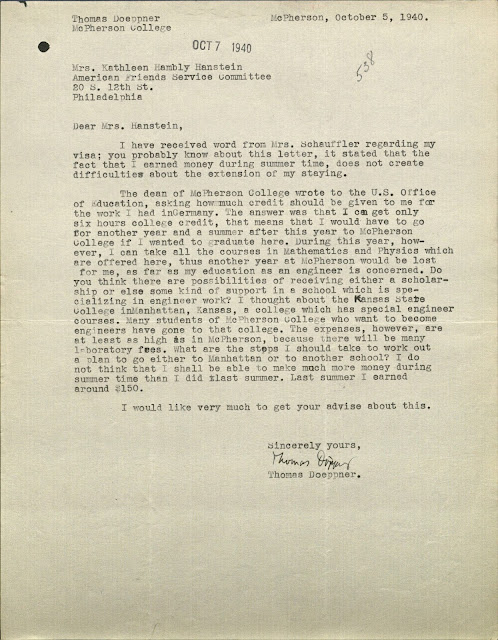 Letter from Opa to Kathleen Hanstein

I have received word from Mrs. Schauffler regarding my visa; you probably know about this letter, it stated that the fact that I earned money during summer time, does not create difficulties about the extension of my staying.

The dean of McPherson College wrote to the U.S. Office of Education, asking how much credit should be given to me for the work I had in Germany. The answer was that I can get only six hours college credit, that means that I would have to go for another year and a summer after this year to McPherson College if I wanted to graduate here. During this year, however, I can take all the courses in Mathematics and Physics which are offered here, thus another year at McPherson would be lost for me, as far as my education as an engineer is concerned. Do you think there are possibilities of receiving either a scholarship or else some kind of support in a school which is specializing in engineer work? I thought about Kansas State College in Manhattan, Kansas, a college which has special engineer courses. Many students of McPherson College who want to become engineers have gone to that college. The expenses, however, are at least as high as in McPherson, because there will be many laboratory fees. What are the steps I should take to work out a plan to go either to Manhattan or to another school? I do not think that I shall be able to make much more money during summer time than I did last summer. Last summer I earned around $150.

I would like very much to get your advise about this.

So this is a bunch of letters- but they all go together and they are all really informative. Let's start with the first one. Opa hears from Mrs. Schauffler who basically gives him the cue to breathe a sigh of relief- she reports from her meeting with the folks in DC who have a say in his visa matter. Her final analysis: it's going to be ok! You're a shoo-in!

Next we have the memo of information about Mrs. Schauffler's meeting in DC- where Opa can read plainly the moment when Mr. Salisbury basically guarantees Opa's successful visa renewal. I think it is odd that no one seems concerned about his lack of a passport. I am also a little troubled by the way that the memo of information on the conference uses the phrases "Student visa" and "visitor's visa" interchangeably- when I think they are very distinctly different visas.

And.... that's what Opa says in his response to Mrs. Schauffler- basically "Thanks! Are you sure we're talking about my visitor's visa becoming a student visa?" I have no idea why everyone is so confused about this and yet some people seem to be very clear about how distinct the two visas are. Opa has to be frustrated by this- but at the same time- everybody seems to be confident that it is all going to work out just fine.

Lastly- Opa writes to Mrs. Hanstein- shares the good news with her (which he rightfully assumes she already knows) and then begins asking questions about his next step. This sort of gets ahead of where he is by a whole year, but I think Opa has gotten wise about how much time it takes to work these matters out. He wants to go about continuing his education at a place like Kansas State, where he can continue on the engineering track. Opa realized that he wouldn't be getting as much college credit from his German arbitur that he hoped. The arbitur is about the equivalent of our Associates degree here in America- but done in High School- maybe it's more like taking very advance honors classes in High School that you get college credit for. The credits aren't transferring like Opa hoped. Isn't that always how it works out?! My special honors classes gave me far fewer college credits than were promised. So now Opa realizes he has about a year and a half left of school after this coming year and he's run out of engineering classes to take at McPherson.

Poor guy- will he have to do this long process all over again in order to get into a school like Kansas State? Maybe it will be a little easier as a transfer from one American school to the other. Hopefully Mrs. Hanstein has some advice for him.

In the end though- there is hope for the future- hope for a visa- hope for another year on the free soil of America.