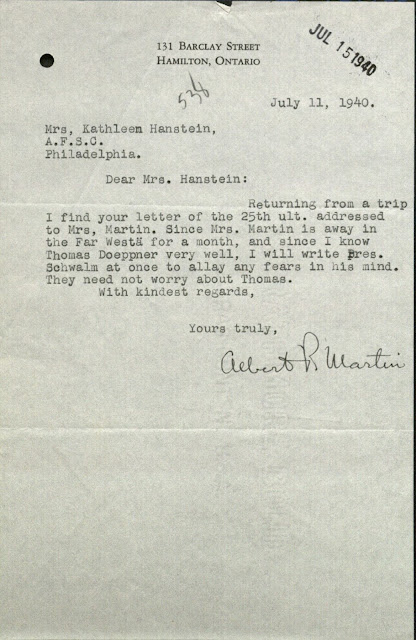 Letter from Albert Martin to Kathleen Hanstein of AFSC

Returning from a trip I find your letter of the 25th ult. addressed to Mrs. Martin. Since Mrs. Martin is away in the Far West for a month, and since I know Thomas Doeppner very well, I will write Pres. Schwalm at once to allay any fears in his mind. They need not worry about Thomas. 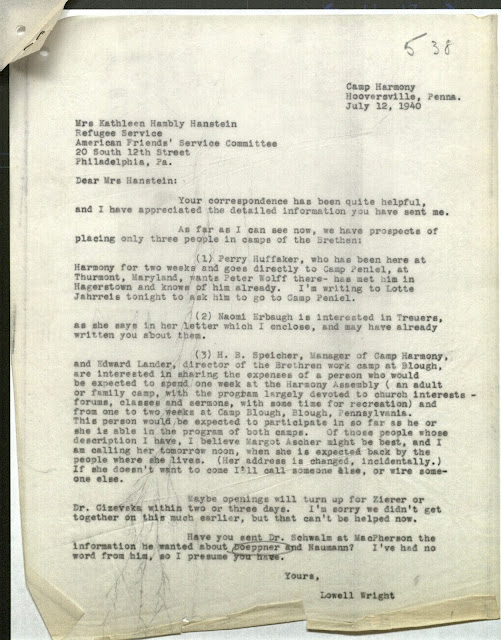 Transcription: (I'm only going to transcribe the last paragraph of this letter- the part having to do with Opa, the rest is conversation about people at the Quaker summer camps)

...Have you sent Dr. Schwalm at McPherson the information he wanted about Doeppner and Naumann? I've had no word from him, so I presume you have. 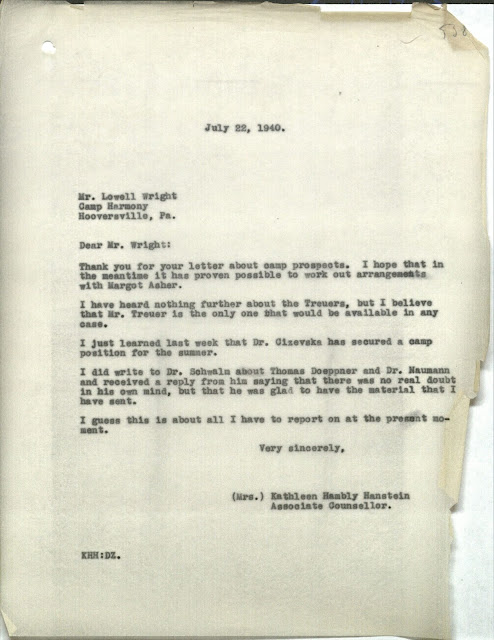 Transcription: (once again, I'm just going to transcribe the last two paragraphs- the first part of the letter is in reference to the summer camps)

...I did write to Dr. Schwalm about Thomas Doeppner and Dr. Naumann and received a reply from him saying that there was no real doubt in his own mind, but that he was glad to have the material that I have sent.

I guess this is about all I have to report at the present moment.

So these are just follow up letters in case you were still worried Opa was a spy or being accused of being a spy. After the rapidly successful spring invasion of Holland and France, folks started to worry about Nazi spies infiltrating their world. They called them the hidden "fifth column" of soldiers who go before their comrades and prime the place for a successful invasion. While there were likely Nazi spies all over- they didn't look like Opa.

Kathleen Hanstein must have gotten some of her information from Lowell Wright (who probably travelled to colleges to talk about opportunities at the Quaker camps). Maybe Lowell and Dr. Schwalm had a conversation and Lowell got the impression that Dr. Schwalm was concerned about the 5th Column stuff? Or maybe the students asked questions about it? I'm not really sure- but here we find Albert Martin letting Kathleen know he'll vouch for Opa- and I love his line: "they need not worry about Thomas."

In the next letter, you find Lowell Wright checking in to make sure Kathleen got the info and followed through with Dr. Schwalm. Kathleen responds that she did and that Dr. Schwalm was grateful for the information, but that he wasn't concerned that his German refugees on campus were potential spies.

I think that wraps up the 5th Column conspiracy for Opa. Luckily he had been connected with folks who could vouch for him, and connected with the community at McPherson enough that they did not suspect he could have anything to do with Hitler.

I appreciate (and get boggled!) the fact that there is constant communication between multiple Quaker agencies and people on multiple pieces of information. These documents were embedded in a file with a handful of letters about the camps.
Posted by Sarah Snow at Wednesday, November 04, 2015