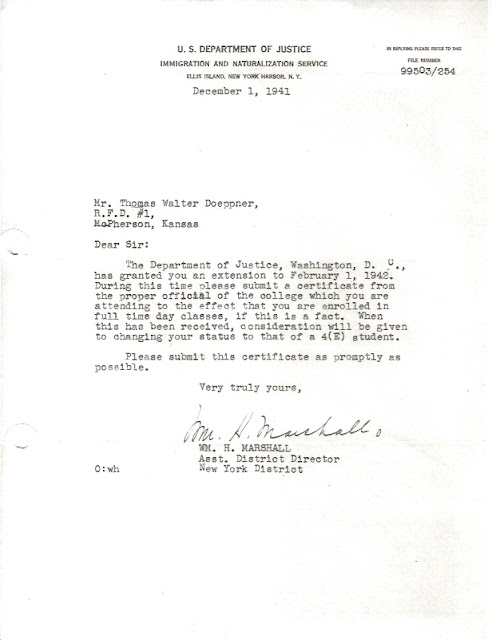 Letter from WM H. Marshall of INS to Opa
Transcription:

The Department of Justice, Washington, D.C., has granted you an extension to February 1, 1942. During this time please submit a certificate from the proper official of the college which you are attending to the effect that you are enrolled in full time day classes, if this is a fact. When this has been received, consideration will be given to changing your status to that of a 4(E) student.

Please submit this certification as promptly as possible. 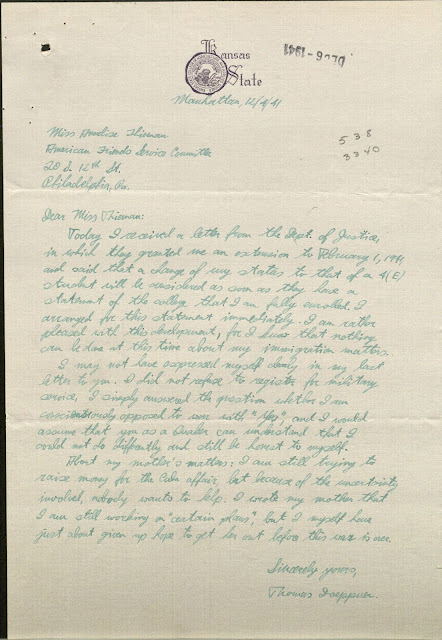 Today I received a letter from the Dept. of Justice, in which they granted me an extension to February 1, 1941, and said that a change of my status to that of a 4(E) student will be considered as soon as they have a statement of the college that I am fully enrolled. I arranged for this statement immediately. I am rather pleased with this development, for I know that nothing can be done at this time about my immigration matters.

I may not have expressed myself clearly in my last letter to you. I did not refuse to register for military service, I simply answered the question whether I am conscientiously opposed to war with "yes," and I would assume that you as a Quaker can understand that I could not do differently and still be honest to myself..

About my mother's matters: I am still trying to raise money for the Cuba affair, but because of the uncertainty involved, nobody wants to help. I wrote my mother that I am still working on "certain plans," but I myself have just about given up hope to get her out before this war is over.

Well, Opa gets his rebuttal. Let's start with that and go back to the main part after. I love the way he sort of starts with the classic debate technique of "Perhaps I wasn't clear enough, or else you'd understand." He rewords her original argument that he refused service when no one asked him to serve. He says that instead, what he did was answer a question honestly: are you opposed to war?- Yes. Then he tells Annelise he assumes that she as a Quaker would understand his need to answer honestly in opposition to war. (Quakers are historically theological pacifists.) Now- Opa didn't see the memos in response to his last question asking their opinion when it became clear that they were not all Quakers. However, I do think if he did see the memos he would have been even more irked as they didn't end up giving him any advice other than to do what he felt was right- and then Annelise chastised him for what he chose to do. I'm curious if Annelise will respond to this argument of Opa's.

Ok so to the main point of the letters: Opa's temporary visa has been extended to February 1, 1942 (Opa misquoted in his letter 1941)! This is great news- also the fact that Opa might be considered for a student visa, which would extend his approved times further and provide the ability to work in a steady job (I believe). So this is an exciting possibility for Opa to have more stability and less paperwork.

Opa's final remarks are sad, and go to confirm the feeling I have had over the last several letters and news about Ella's situation..."I myself have just about given up hope to get her out before this war is over."