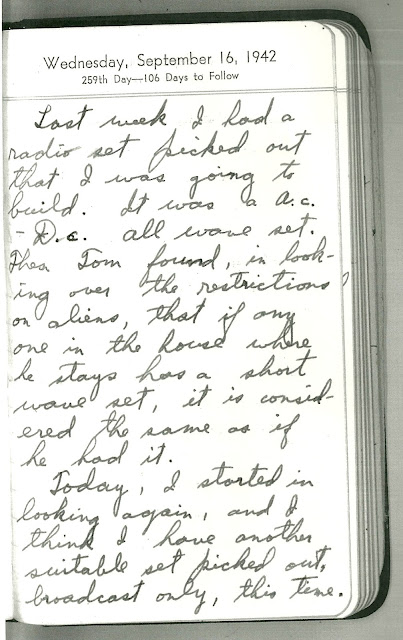 Last week I had a radio set picked out that I was going to build. It was a A.C.-D.c all wave set. Then Tom found, in looking over the restrictions on aliens, that if any one in the house where he stays has a short wave set, it is considered the same as if he had it.

Today, I started in looking again, and I think I have another suitable set picked out, broadcast only, this time.

Thank God for Herb Michael. I don't know how close he and Opa were. I assume they got along fine or else they wouldn't be living together for another year. I'm thankful for this diary (which his daughter so kindly made copies from), and I'm thankful at how considerate he has been of Opa. Opa has strange rules he must abide by, and even when it cramps Herb's style, he goes back out and gets a less fancy radio.

I do wonder how many folks had their houses searched for radios- but I imagine Opa knew to be especially careful as he wasn't any ordinary alien, but an "enemy alien." Likely that was who the rule was for. What other sacrifices did people have to make to be associated with Opa? Hopefully not too many!
Posted by Sarah Snow at Sunday, April 23, 2017