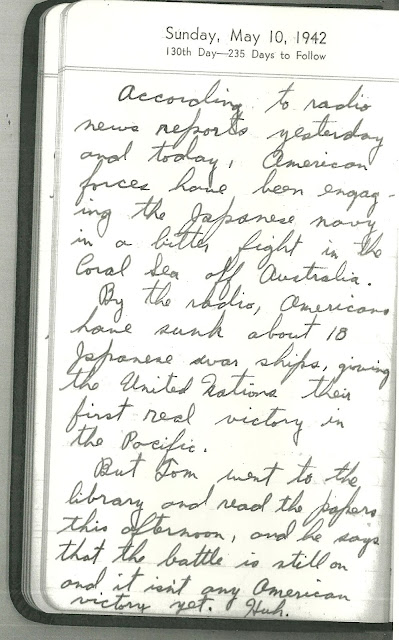 According to radio reports yesterday and today, American forces have been engaging the Japanese navy in a bitter fight in the Coral Sea off Australia.

By the radio, Americans have sunk about 18 Japanese war ships, giving the united Nations their first real victory in the Pacific.

But Tom went to the library and read the papers this afternoon, and he says that the battle is still on and it isn't any American victory yet. Huh.

Growing up, when we visited my grandparents, Opa watched the 5 o'clock news every day, and read the newspaper every morning. He was always up to date on current events, though he didn't burden me with them. I wish he had. Perhaps he wanted me to enjoy my childhood in a way he never was allowed to.

Either way, there is something so familiar in this diary entry. Opa hears the radio broadcasting the US military victory, and his first response is to cross-check it. He heads straight for the library where he finds multiple newspapers and discerns from multiple sources other than just the radio, that the victory is not wholly won.

Opa grew up with propaganda blasting from the radios. He knew better than to trust one source. His father worked for the news industry. When Opa was a kid, he and his sister would tinker with their radio and listen on headsets to banned broadcasts from other countries for a different perspective.

I just adore this image of Opa scouring the papers for the real deal. Poor Herb was happy with his radio broadcast. He's going to appreciate having a street-wise German in his midst though. Let this be a lesson to us all: get news from multiple sources, lean on more researched pieces and reputable journalists. Don't trust the first headline you read or hear. Do your homework, and you too, can disappoint your roommate.
Posted by Sarah Snow at Monday, April 17, 2017