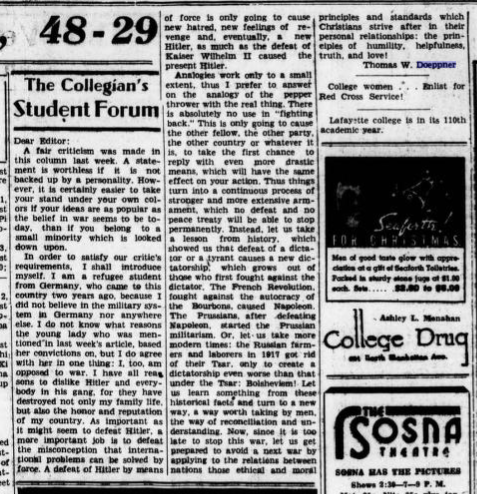 Letter to the Editor in Kansas Collegiate by Opa

A fair criticism was made in this column last week. A statement is worthless if it is not backed up by a personality. However, it is certainly easier to take your stand under your own colors if your ideas are as popular as the belief in war seems to be today, than if you belong to a small minority which is looked down upon.

In order to satisfy our critic's requirements, I shall introduce myself. I am a refugee student from Germany, who came to this country two years ago, because I did not believe in the military system in Germany nor anywhere else. I do not know what reasons the young lady who was mentioned in last weeks article, based her convictions on, but I do agree with her in one thing: I, too, am opposed to war. I have all reasons to dislike Hitler and everybody in his gang. For they have destroyed not only my family life, but also the honor and reputation of country. As important as it might seem to defeat Hitler, a more important job is to defeat the misconception that international problems can be solved by force. A defeat of Hitler by means of force is only going to cause new hatred, new feelings of revenge and eventually, a new Hitler, as much as the defeat of Kaiser Wilhem II caused the present Hitler.

Analogies work only to a small extent, thus I prefer to answer on the analogy of the pepper thrower with the real thing. There is absolutely no use in "fighting back." This is only going to cause the other fellow, the other party, the other country or whatever it is, to take the first chance to reply with even more drastic means, which will have the same effect on your action. Thus things turn into a continuous process of stronger and more extensive armament, which no defeat and no peace treaty will be able to stop permanently. Instead, let us take a lesson from history, which showed us that defeat of a dictator or a tyrant causes a new dictatorship, which grows out of those who first fought against the dictator. The French Revolution, fought against the autocracy of the Bourbons, caused Napoleon. The Prussians, after defeating Napoleon, started the Prussian militarism. Or, let us take more modern times: The Russian farmers and laborers in 1917 got rid of their Tsar, only to create a dictatorship even worse than that under the Tsar: Bolshevism! Let us learn something from these historical facts and turn to a new way, a way worth taking by men, the way of reconciliation and understanding. Now, since it is too late to stop this war, let us get prepared to avoid a next war by applying to the relations between nations those ethical and moral principles and standards which Christians strive after in their personal relationships: the principles of humility, helpfulness, truth, and love!

I am in awe of Opa's pacifist stance, especially in light of his background. He said it best himself:

I have all reasons to dislike Hitler and everybody in his gang. For they have destroyed not only my family life, but also the honor and reputation of country.

Hitler and his followers have absolutely destroyed - to ripple effect- generations of families. Opa's hope is that humanity can rise to a new standard, a new way of being that no longer uses force in response, but creates a new process for peace.

He has some good arguments, that often the fall of one power by force creates space for another power of equal or greater oppression to fill. This is not new information, but we do often fail to remember it when we are angry and in hopes to retaliate a wrong done against us. We think that we can subdue with fear, when fear almost always creates a vacuum for revolt and abuse of power.

I appreciate that Opa recognizes that now that the US is at war, the focus must shift.

I do think that whether someone is a strict pacifist or a fervent believer in Just War, that most logical people can agree that war is not something we should strive for.

It is hard though, because we are such a broken world, with such complicated and messy webs of conflict, it seems it is impossible to achieve what we fantasize as "world peace." However, I hang my hat on Opa's conclusion, that the least we can do is try with "the principles of humility, helpfulness, truth, and love!"
Posted by Sarah Snow at Friday, April 07, 2017