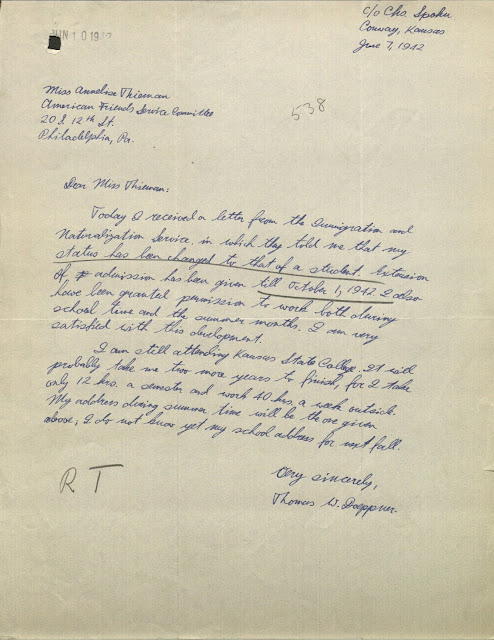 Today I received a letter from the Immigration and Naturalization Service, in which they told me that my status has been changed to that of a student. Extension of admission has been given till October 1, 1942. I also have been granted permission to work both during school time and the summer months. I am very satisfied with this development.

I am still attending Kansas State College. It will probably take me two more years to finish, for I take only 12 hrs a semester and work 40 hrs a week outside. My address during summer time will be the one given above; I do not know yet my school address for next fall.

Good news!! At last some good news!! Opa is now on a student visa, only a little less than three years after coming to the USA. He's been given permission to work during school and the summer (although it looks like he's been doing that already). He's so glad!

He hasn't had much to correspond with Ms. Thieman since the letter about his mother not making it out of Germany. He was in limbo on a revolving visitors visa (with few prospects of being deported, and little prospect of more permanent residency because of the war). So for Opa to hear out of nowhere that he has been granted a student visa with more flexible benefits- is a complete surprise! He writes to inform Annelise, as well as let her know his updates on school and living arrangements (he and Herb haven't decided on the $7/month room yet I guess).

I can only imagine that this letter will be a little bit of a morale booster for Annelise and her colleagues at the AFSC. I imagine they've been getting a lot of bad news lately, so even a little ray of sunshine here must be a help.

I do want to say, Opa really did put himself through college. This was not the German way (he was shocked when he arrived in the US to see students working). He couldn't graduate on time because he was working so much. 12 hours on an engineering major with a 40 hr/week job is insane!

I wonder if Opa's struggles to get himself through school has anything to do with his determination in his generosity towards my sisters and I when we were going to college. Thanks to Opa, we didn't have to work 40 hour jobs while we were full-time students.

Once more: Yay! Student Visa! Finally!! I hope it gave Annelise a smile.
Posted by Sarah Snow at Thursday, April 20, 2017