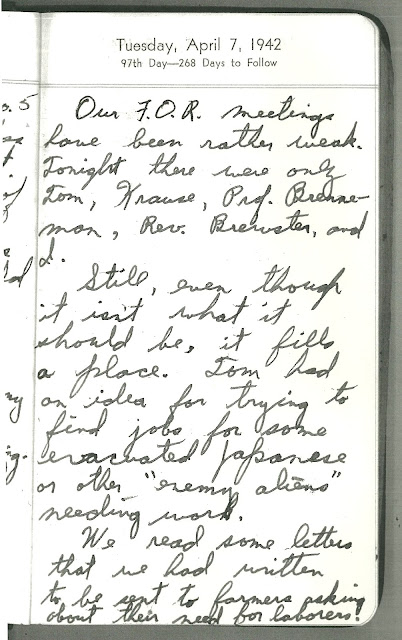 Our F.O.R. meetings have been rather weak. Tonight there were only Tom, Krause, Prof. Brennaman, Rev. Brewster, and I.

Still, even though it isn't what it should be, it fills a place. Tom had an idea for trying to find jobs for some evacuated Japanese or other "enemy aliens" needing work.

We read some letters that we had written to be sent to farmers asking about their need for laborers.

God Bless Opa. I mean seriously. He is just flat out determined to do good even when it isn't popular. Their Fellowship of Reconciliation club is admittedly weak by Herb's standards. I can only imagine that a peace-loving club might not be the most popular thing in the aftermath of Pearl Harbor. But like Herb says "it fills a place." I kind of love that expression. It's sort of a sad admittance that they may not be effecting much change, but their club is filling a need, and they will fill the space until the space grows.

I'm deeply appreciative of Herb's diary, as it gives us such an intimate glimpse into Opa's college days, especially when now we hear so little else from him or his family in terms of documents. This has been a quiet year.

Opa's idea to help Japanese "enemies of the state" to get work and find some help/hope is inspiring. It's also fitting that he, an enemy of the state, would be sympathetic to helping others in much the same way he was helped. I'm grateful that he thought to help, thought to "fill the place" with kindness, generosity, and peace.