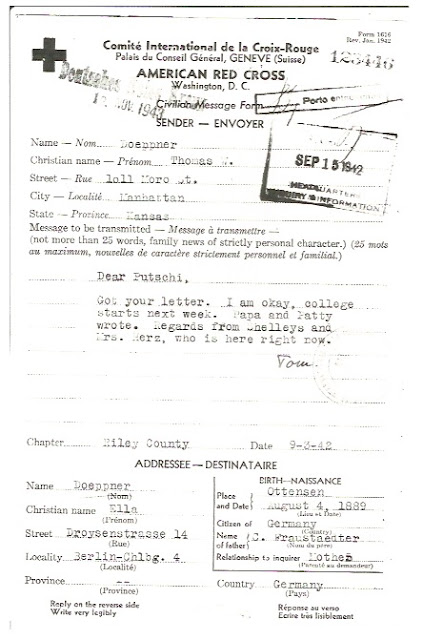 Got your letter. I am okay, college starts next week. Papa and Patty wrote. Regards from Shelleys and Mrs. Herz, who is here right now. 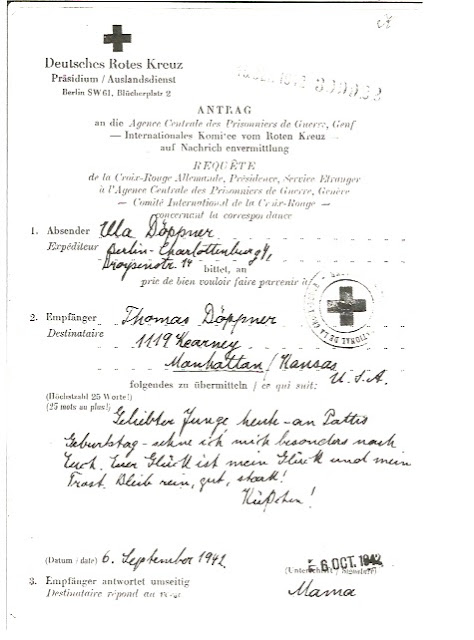 6 September 1942
Beloved boy, today—on Patti’s birthday— I especially miss you both. Your happiness is my happiness and my consolation. Be pure, good, strong!
Kisses!
Mama
By the stamps on this letter, it appears that the letter was written on September 6, 1942, was sent or stamped by someone in September of 1942, and was stamped again (potentially the date of receipt in US?) October 6, 1942. If I am right about the stamps and what they mean (very good chance I'm wrong), then Ella's letters are getting to Opa within a month of sending, while Opa's letters seem to be flown on the backs of seagulls, only to arrive over a year after they are sent. Could it be that Ella had to wait that long before hearing from her son?!
And then there is another little tid-bit that I don't know what to do about. Opa mentions that his father and sister wrote. But we don't have any letters from August from 1940 to now. We don't have a letter from Patti in this year either. So- either both of those letters somehow got lost, or Opa had some sense to mention all of Ella's family were in communication and paying attention.
Ella manages to exude her personality in even her short letters: "Your happiness is my happiness and my consolation." That about sums up Ella.