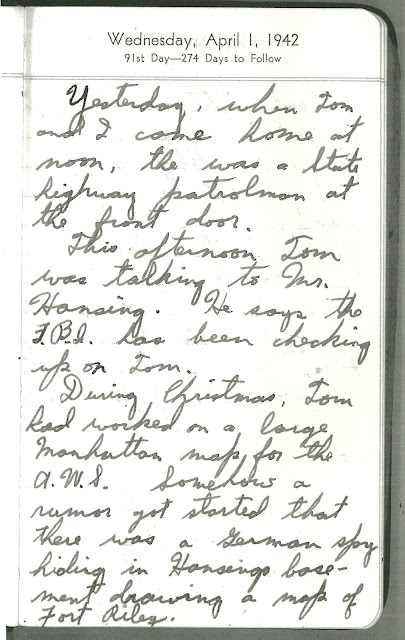 Yesterday, when Tom and I came home at noon, there was a State highway patrolman at the front door.

This afternoon Tom was talking to Mr. Hansing. He says the F.B.I. has been checking up on Tom.

During Christmas, Tom had worked on a large Manhattan map for the A.W.S. Somehow a rumor got started that there was a German spy hiding in Hangings basement drawing a map of Fort Riley.

And so it begins. I'm sort of surprised that Opa's German-ness hasn't gotten him in the spotlight before. But now that he's working on maps- he's a spy.

Poor Opa. Now he has to chit-chat with the FBI. Seriously. I wonder if he felt afraid or if he was confident that his innocence would carry him, even over the fears of people at war. What will happen here? Will rumors be enough to impact Opa's life, or will the police be able to sift this one out?

I do want to point out we haven't heard from Ella since February. Is Opa becoming worried?
Posted by Sarah Snow at Friday, April 14, 2017