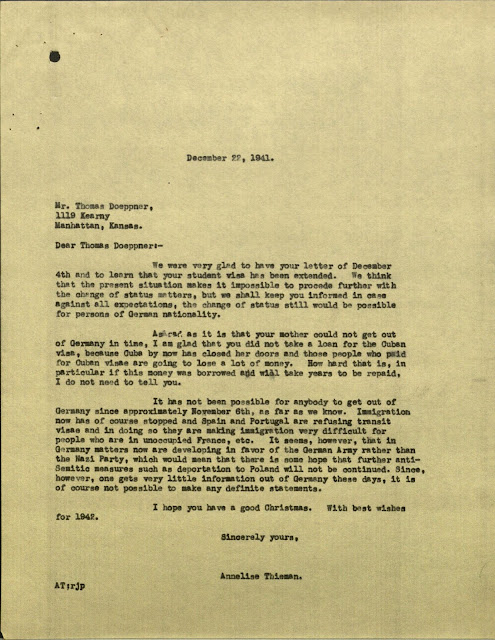 We were very glad to have your letter of December 4th and to learn that your student visa has been extended. We think that the present situation makes it impossible to proceed further with the change of status matters, but we shall keep your informed in case against all expectations, the change of status still would be possible for persons of German nationality.

A sad as it is that your mother could not get out of Germany in time, I am glad that you did not take a loan for the Cuban visa, because Cuba now has closed her doors and those people who paid for Cuban visae are going to lose a lot of money. How hard that is, in particular if this money was borrowed and will take years to be repaid, I do not need to tell you.

It has not been possible for anybody to get out of Germany since approximately November 6th, as far as we know. Immigration now has of course stopped and Spain and Portugal are refusing transit visae and in doing so they are making immigration very difficult for people who are in unoccupied France, etc. It seems, however, that in Germany matters are now developing in favor of the German Army rather than the Nazi party, which would mean that there is some hope that further anti-Semitic measures such as deportation to Poland will not be continued. Since, however, one gets very little information out of Germany these days, it is of course not possible to make any definite statements.

I hope you have a good Christmas. With best wishes for 1942.

I'm going to go out on an emotional limb and say that this is a craptastic letter from Annelise. She has bad news and couches it with how the news could be worse for others, and might not be as bad for his mother, except we don't actually know anything.

If I were Opa, I'd ask her to save her speech about how sad it is for people who took out loans for Cuba. It IS sad, but my gosh- let Opa be upset about his Mom without bringing some other story into it. I'm glad he didn't take out a loan either, but I'm pretty sure that isn't the focus right now.

Now all the hope, even the teeniest shred of hope that he knew he shouldn't hold on to- it's gone. It's a done deal. The door is not only shut, it's sealed, locked, and nothing but the end of the war has the key.

Then Annelise tells Opa that since the focus is on the Army rather than the Nazi party - the anti-semitic actions might slow down (which I think may be a bit of ignorance into how monolithic Hitler's regime was- the Army WAS the Nazi Party by then). I get it though- because everyone thought this. Once Germany had to decide what to focus on for success, they would focus on the literal war rather than their anti-semitic fancies. But this assumption by everyone completely underestimated just how successful the anti-semitic scapegoating had become. To annihilate or banish the Jews WAS to win the war. The whole purpose of the war was to establish a powerful German (Aryan) state. Jews simply could not be in that picture. It was likely their downfall in terms of winning the military war, but the Germans (Nazis) did not back down in their war against the Jews, rather, they stepped it up. They had three fronts: the West, East, and the Jews. The Wansee conference, where they decided on the Final Solution as a government and wartime policy- happened in January of 1942- just a short month from this letter.

Annelise said this sort of weak argument and then follows it with the acknowledgement that they don't really hear much from Germany, so it's hard to make any definite statement. I wanted to yell: THEN DON'T!!

Her false hopes, added sob story, and meager happy Christmas at then end just all made me an angry mess. I don't know how Opa felt reading this letter. He already knew the facts. He already knew that his mother wasn't getting out. He didn't need Annelise to tell him. But I will say, there is something desperately final about hearing the effort in past tense: "your mother could not get out of Germany in time."
Posted by Sarah Snow at Saturday, April 08, 2017