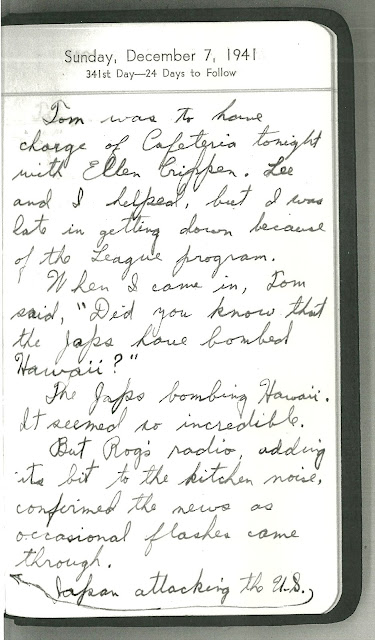 Tom was to have charge of Cafeteria tonight with Ellen Crippen. Lee and I helped, but I was late in getting down because of the League program.

When I came in, Tom said, "Did you know that the japs have bombed Hawaii?"

The Japs bombing Hawaii. It seemed so incredible.

But Rog's radio, adding its bit to the kitchen noise, confirmed the news as occasional flashes came through. 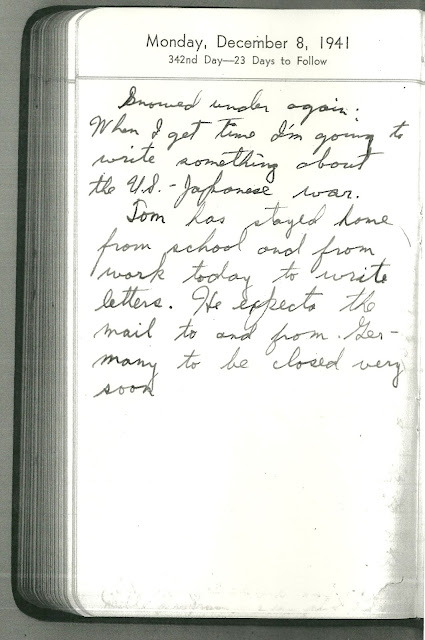 Snowed under again: When I get time I'm going to write something about the U.S. - Japanese war.

Tom has stayed home from school and from work today to write letters. He expects the mail to and from Germany to be closed very soon.

It has happened. The day which will live in infamy. The date that we knew as history students was coming for the Americans- forcing them to make a decision to go to war, when really they had been leaning towards it for a year or more.

I cringe at the vernacular "Japs" - which may not have been so negatively viewed at the time, but holds a pretty negative vibe now in retrospect. Either way- the shock of the attack is felt in the diary entry as Herb tries to process it. He even writes it out to see it "U.S. - Japanese war" but can't write about it just yet in his shock.

Then we hear about Opa: he takes the whole day off school and work to write letters. He knows. War is coming, and all communication may soon be cut off completely. I can picture him sitting at his desk, feverishly writing all day long. Are his relatives doing the same with the same news? A letter to Patti perhaps, a letter to Gisela and Anni, a letter to his Dad maybe? I know he made sure he wrote his mother. What did he say? What would I say in a letter to my family, if I wasn't sure if they would have a chance to get another one again?

I would tell them I love them. I would list the reasons why I am grateful for them. I would tell them to keep positive, to hope, to hold on until we can see each other again. I would tell them I am good, safe, with good opportunities that I won't neglect. I don't know, how do you say goodbye without saying goodbye? How do you make sure your love is felt without sounding like you're writing a eulogy? I think you just don't care at this point and you tell them "thank you, I love you."
Posted by Sarah Snow at Sunday, April 02, 2017