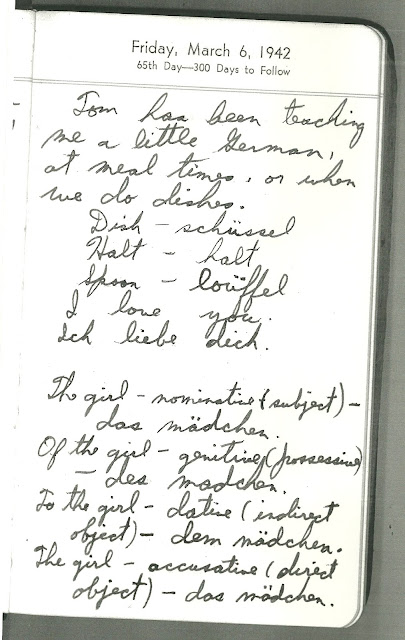 Tom has been teaching me a little German, at meal times, or when we do dishes.

So I learned something from this diary entry. And surprisingly it wasn't German. Had you heard of "genitive" or "dative" or any of those other grammatical cases? I googled them. Let's just say that I am not as much of a grammar nerd as I thought I was. I KNOW that Opa knew these things because he perfected his English and one of his favorite things to do was edit. I'm still jealous that this language skill that seems to be rampant in the Doeppner family did not trickle down to my generation (or my father's for that matter).

I'm also a little surprised that Opa is teaching German. He seemed to have worked so hard to distance himself from his German heritage (my perspective as his granddaughter), but here he is still hanging on to it a little.