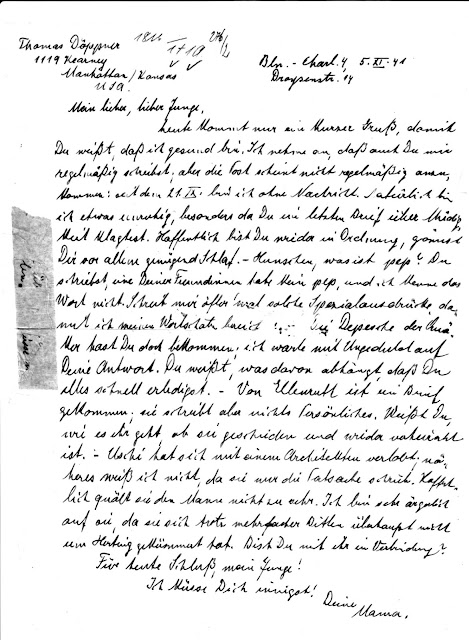 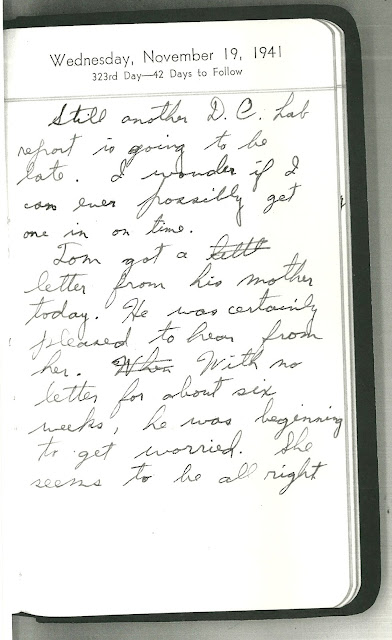 Transcription:
(I'm going to transcribe the diary entry first, then the letter)

Still another D.E. Lab report is going to be late. I wonder if I can ever possibly get one in on time.

Tom got a letter from his mother today. He was certainly pleased to hear from her. With no letter for about six weeks, he was beginning to get worried. She seems to be all right.

Let this journal entry sink in for a moment. (Besides the fact that it is clear that Herb is struggling with his D.E. class) After hearing that the deportations had started up again in Germany, Opa goes six weeks without hearing from his mother who had planned on writing every week and sometimes would slip to every two weeks. Opa had to have been worried.

My dear, dear boy,
Today just a short note to let you know I am well. I assume you write regularly as well, but the mail does not seem to arrive regularly, since September 21st I have been without news. Naturally I am troubled a bit, especially since you complained about being tired. Hopefully you are fine now, do you allow yourself enough sleep? Hunschen what does it mean "pep"? You wrote about one of your friends (female) not having any pep, and I don't know that word.
Write to me more often about such special expressions, so I can enrich my vocabulary. I assume you received the telegram from the Quakers, I am waiting impatiently for your answer. You know how much depends on how fast things can be done now. I received a letter from Ellenruth, but she does not write anything personal. Do you know how she is, if she is divorced and has married again? Uschi got engaged to an architect, I don't know any details, because she wrote only about facts. Hopefully she will not torture the guy too much. I am really angry with her, because in spite of several requests she has not concerned herself about Herting. Are you in contact with her?
I will close for today, my boy!
I kiss you lovingly!
Your Mama
Ella doesn't say much in this letter. I'm surprised Opa hasn't sent a return telegram to the Berlin Quakers (maybe there wasn't a prepaid one) to let them know he is working on the Cuba thing, even if it is for show and not a realistic endeavor. I wonder if Ella knows the amounts required. Perhaps she also knows it is just for show. I love how Ella chastises Opa for not writing when she herself has been fairly quiet. Again, mail is slow- and you can see she wrote the letter on the 5th and it arrived in Kansas on the 19th. Considering the war and the fact that Opa is in the middle of the United States, I'm actually impressed it only takes that long. I think they are used to mail being faster though.

I love that Ella is still learning. She wants to know what "pep" means. Hilarious that Opa used it to describe a woman who had none. Ha!

Ellenruth and Uschi are Opa's cousins, the daughters of Martha and Erich (who are also still stuck in Berlin). Uschi is in England and Ellenruth is in California. Neither are giving much detail about their lives when they write to Ella. So naturally, Ella is trying to get the scoop from Opa in case he knows anything. Herting is an aunt or someone who lives in England- sort of a lonely duck that no one in the family seems to be concerned about except Ella. She's angry with Uschi for not checking in on her.

Now we're in that place when no news is not good news. Opa's nervousness about his mother is now at a higher level. It is helpful to have Herb's diary entry, since it gives us a glimpse into Opa's feelings. We know that he is worried, that he is counting the weeks since his mother's last mail. He's doing much of the same that she is doing- although I doubt he chastises her for not writing enough. He must have felt so responsible for her, and yet completely helpless as he had very little he could do. How do you shoulder a burden like that? Like anything else in life that you have no control over- you just hold the burden, and hope for the best.
Posted by Sarah Snow at Friday, March 31, 2017