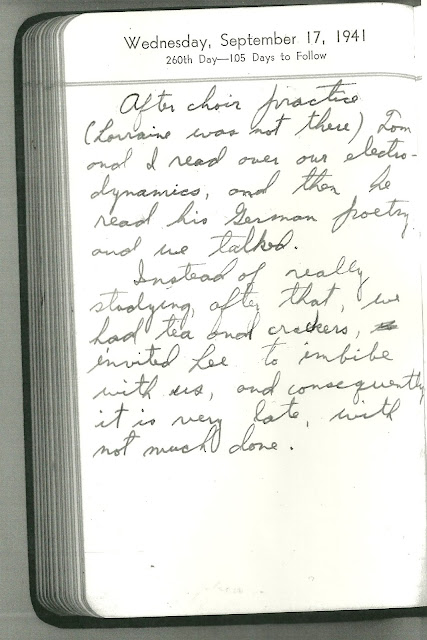 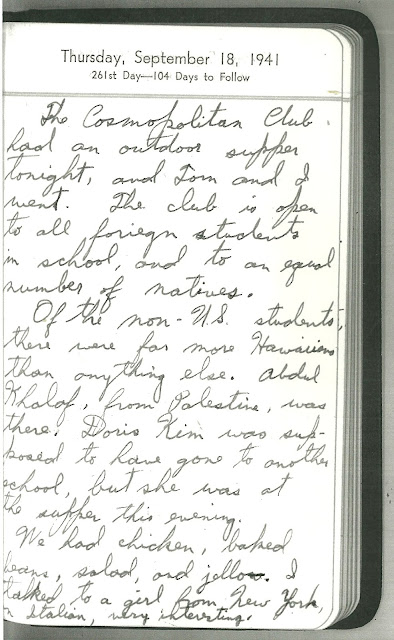 After choir practice (Lorraine was not there) Tom and I read over our electrodynamics, and then he read his German poetry and we talked.

Instead of really studying, after that, we had tea and crackers, invited Lee to imbibe with us, and consequently it is very late, with not much done.

Thursday, September 18, 1941
261st Day - 104 Days to Follow
The Cosmopolitan Club had an outdoor supper tonight, and Tom and I went. The club is open to all foreign stud cents in school, and to an equal number of natives.

Of the non-US students there were far more Hawaiians than anything else Abdul Khalaf, from Palestine, was there. Doris Kim was supposed to have gone to another school, but she was at the supper this evening.

We had chicken, baked beans, salad, and jello. I talked to a girl from New York, an Italian, very interesting.

A day in the life with Opa. This diary gives us so much insight to the regular every day of Opa's college experience. He was such a joiner, in the most positive way. If there was an event, an experience, a joining of minds- he was there. I love that the roommates read their homework and then blew the rest of the evening on such a scandalous time with German poetry, tea and crackers, and talking. Ha!

Here's the thing- for the most part - this is exactly how I wasted time in college. Replace German poetry with other philosophical or religious books, and I spent many hours talking and drinking tea and coffee with friends. How similar our experience was in some of the mundane ways. Something I wish I had taken advantage of when I was in college is the amazing cultural diversity that I was surrounded with. This cosmopolitan club sounds awesome. It's a chance for Herb from Kansas to get together with an Italian from New York and a man from Palestine. I *know* that those opportunities for me to intersect with folks from the around the world were available to me- I just did not take advantage of them or seek them out. I wish I had had an Opa- like roommate to take me out of my comfort zone. I had my own set of friends who took me outside my comfort zone in other ways, but I wish I had let myself be stretched even further.

I remember distinctly the day when I was working at a hotel in my college town and a young woman checked into our hotel. She was kind and polite, and her eyes were so remarkably soulful that I found myself asking her questions and taking the conversation past the usual surface chat that I engaged in with hotel guests. I had to know the story behind her eyes. She was from Palestine, and had a brochure in her hand about the daily bulldozing that was happening to the homes of people she loved. Before talking to her, I had no idea that there was tension at the Israel/Palestine border and that houses were being bulldozed. I know that the problem is complicated, but I had never heard the Palestinian side of the story. That was over 15 years ago and was a 20 minute conversation. I never saw her again- but I remember her, and I remember her story. That's the kind of impact that meeting people from someplace else can have.

Even in seminary I was surrounded by people from all over the world and my closest friends were southerners. I'm trying to make a real effort here in the DC suburbs to take advantage of the diversity around me. I think I need to try harder. I wonder if there is a cosmopolitan club I can join?