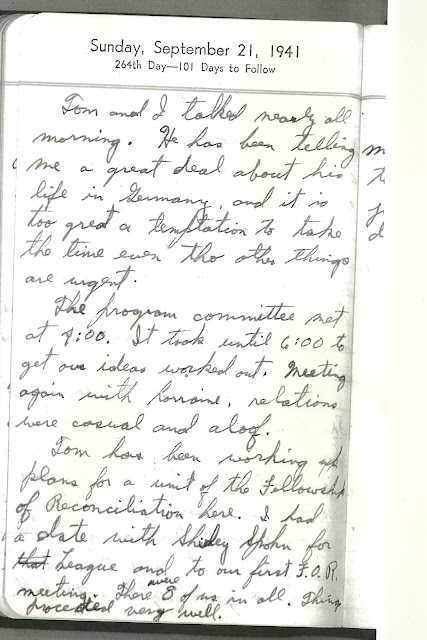 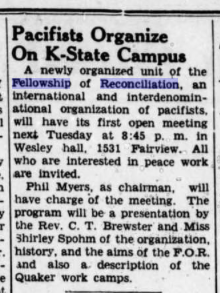 Tom and I talked nearly all morning. He has been telling me a great deal about his life in Germany, and it is too great a temptation to take the time even tho other things are urgent.

The program committee met at 4:00. It took until 6:00 to get our ideas worked out. Meeting again with Lorraine, relations were casual and aloof.

A newly organized unit of the Fellowship of Reconciliation, an international and interdenominational organization of pacifists, will have its first open meeting next Tuesday at 8:45pm in Wesley hall, 1531 Fairview. All who are interested in peace work are invited.

Phil Myers, as chairman, will have charge of the meeting. The program will be a presentation by the Rev. C.T. Brewster and Miss Shirley Spohn of the organization, history, and the aims of the F.O.R. and also a description of the Quaker work camps.

Alrighty, let's start with the diary entry. I love that Herb is listening with rapt attention to Opa's stories of Germany. This reminds me (and my readers) that Opa has not forgotten his home. It is still a part of his daily thoughts, his conversation, his passion. He does not have shame about Germany- or at least not in the way that he has stopped talking about it. When I was growing up, Germany was not a topic of conversation, at least not in the way of reminiscing about his childhood. Those stories were replaced by warnings to pay attention to the news, to educate myself, to remember that bad things can happen in the strangest places. But even that he said after being asked questions. Rarely did Opa willing offer up thoughts on Germany without prompting. Honestly, the only thing I remember him saying about Germany was that calling someone a Nazi is the worst thing you could possibly say to someone, and that he read may books trying to figure out how Germany devolved into a country that orchestrated the holocaust.

Now to change the topic completely- is Herb dating Lorraine? Or trying to? Or did he go on a date with Shirley? Maybe both. Way to go Herb.

He talks about Opa starting (with friends) the Fellowship of Reconciliation. He had this club in McPherson, and I don't think I realized until this newspaper article that the club was explicitly a pacifist organization.

The news article brings up familiar names: Phil Myers and Shirley Spohn (who was mentioned by Herb)- these folks are all from McPherson. It's good to know that Opa isn't completely on his own without familiar faces in this new university. Looks like a lot of folks went on from McPherson to Kansas State to further their studies.

So back to the Fellowship of Reconciliation. It's a pacifist organization with goals of "peace work." The last part of the article mentions the Quaker work camps. I know about these camps, and I think that they served as alternatives for Conscientious Objectors who did not want to fight in the war. So with the war looming large, people may have been interested in learning about options in case they were called to service.

Again- I am so dumbfounded by all this. Opa was in the Army for 29 years! I just... what shifted? At 21, he was actively forming groups for pacifists, talking to the government about being a conscientious objector (which would nearly eliminate his chances of citizenship), and exploring Quaker work camps as possible alternatives to joining the military. He's not just a casual pacifist, he's organized!

I am looking forward to the letter that explains all this. It's going to exist. Right?
Posted by Sarah Snow at Monday, March 20, 2017