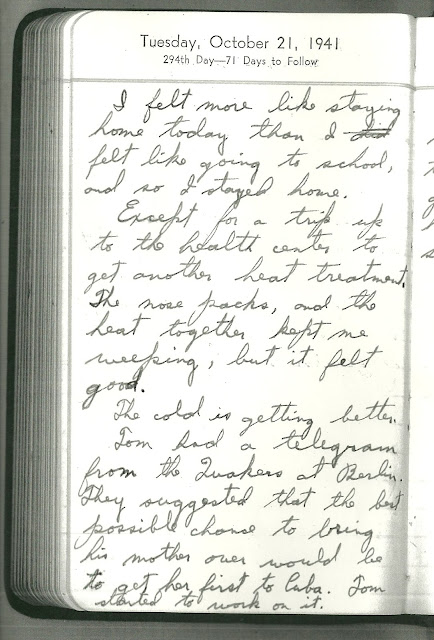 I felt more like staying home today than I felt like going to school, and so I stayed home.

Except for a trip up to the health center to get another heat treatment. The nose packs, and the heat together kept me weeping, but it felt good.

The cold is getting better.

Tom had a telegram from the Quakers at Berlin. They suggested that the best possible chance to bring his mother over would be to get her first to Cuba. Tom started to work on it. 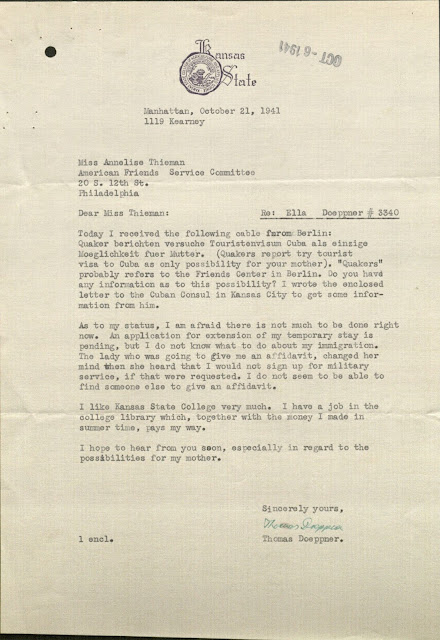 Today I received the following cable from Berlin: Quaker berichten versuche Touristenvisum Cuba als einzige Moeglichkeit fuer Mutter. (Quakers report try tourist visa to Cuba as only possibility for your mother). "Quakers" probably refers to the Friends Center in Berlin. Do you have any information as to this possibility? I wrote the enclosed letter to the Cuban Consul in Kansas City to get some information from him.

As to my status, I am afraid there is not much to be done right now. An application for extension of my temporary stay is pending, but I do not know what to do about my immigration. The lady who was going to give me an affidavit changed her mind when she heard that I would not sign up for military service, if that were requested. I do not seem to be able to find someone else to give an affidavit.

I like Kansas State College very much. I have a job in the college library which, together with the money I made in summer time, pays my way.

I hope to hear from you soon, especially in regard to the possibilities for my mother. 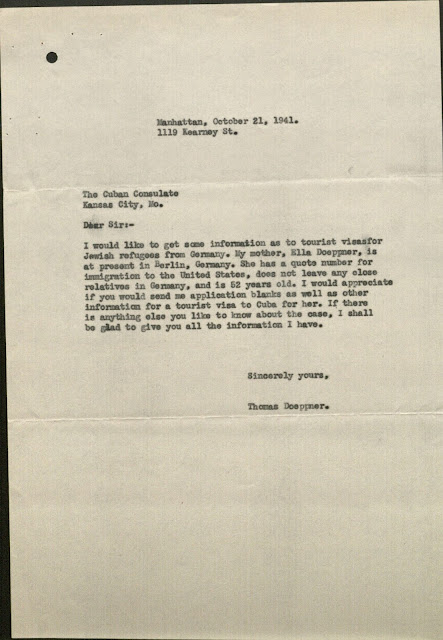 Letter from Opa to Cuban Consulate

I would like to get some information as to tourist visas for Jewish refugees from Germany. My mother, Ella Doeppner, is at present in Berlin, Germany. She has a quota number for immigration to the United States, does not leave any close relatives in Germany, and is 52 years old. I would appreciate if you would send me application blanks as well as other information for a tourist visa to Cuba for her. If there is anything else you like to know about the case, I shall be glad to give you all the information I have.

This blog makes me love me some research with primary documents. SO- the last letter from Ella (which we had trouble dating) was about this Cuba thing. As you may know- Opa was not reading Ella's letters in time like we are, but usually about a month later (war time mail is slow). But really- we've gotten to read this thing like it's all happening simultaneously, and we get to read Ella's letter, Opa's letters, the telegram, and the roommate's diary entry about it. SO good.

Opa got a telegram from the Berlin Quakers (which Ella knew they had sent) telling Opa that the only possibility left for his mother was for him to try to get her a tourist visa to Cuba. Let me give you guys a really brief explanation on why going to Cuba helps her get to the US. First of all- really going anywhere at this point is preferable to staying in Berlin. However, this method of going somewhere first and then ending up in the desired destination is a loophole/trick that has been used since the beginning of the refugee crisis spurred on by kristalnacht and the war. Most countries had immigration quotas (total allowable people from a certain country). So for the sake of explanation, I'm going to simplify and use small numbers. Let's say the US has a policy that only 100 people each year can come from Germany. That number was never all that restrictive before, but now all of a sudden a bunch of people want to come, so there's a line of 500 people, but only 100 per year get in. You're in the back of that line, and you see that the US lets 50 people from Cuba in every year. In general, not that many Cubans are going to the US, so you decide to go stand in the Cuban line instead. SO you get a tourist visa to Cuba (which at this point seems to be easier than getting directly into the US) and you figure, hey, I have a shorter line in Cuba, and if I have to wait- I'm in Cuba- I should be OK.

That's oversimplified- but in essence that is how Opa got to the US. His temporary residency in Amsterdam allowed him to move faster through the immigration process because his line was theoretically shorter. Now once Germany invaded Holland, the story changed. Because Europe is at war- the story is constantly changing. So when someone sees an opening (Cuba's handing out tourist visas!)- they jump at it.

Here's the issue, many of these openings are brief and unstable, and also expensive. Wealthy folks had a much better chance at taking advantage of these opportunities. That's why Hitler's policies of financially crippling the Jews was actually doubly penalizing to jewish refugees. Even if they had previously had the means to get out- they slowly lost their ability to pay their way out. Those who didn't get out early slowly and steadily lost their ability to leave. Ella and her sister Martha fit this situation. Ella was never super wealthy, but she did have the help and support of the Quakers, who it seems were coordinating efforts to help pay for her passage to Cuba.

So Herb told us in his diary about his head cold and treatments, and then the last line of his diary is this unexpected telegram that Opa received from the Quakers in Berlin. Herb said Opa got to work on it- and he was right. Herb's diary entry was October 21st, and the two letters that Opa sent- one to the AFSC and one to the Consul in Cuba - were both dated October 21st. Opa wasted zero time.

His Mom was right- he was doing everything he could.
Posted by Sarah Snow at Tuesday, March 28, 2017