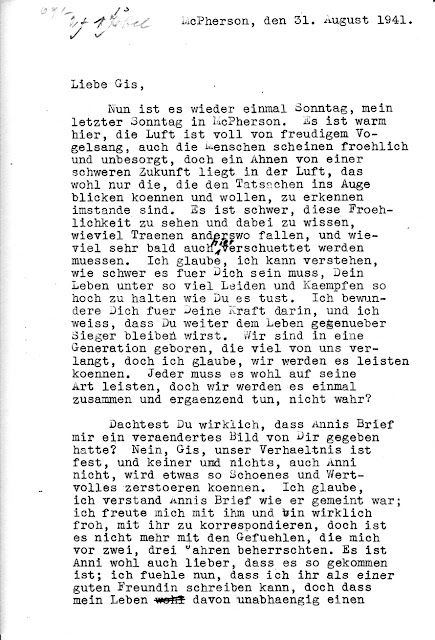 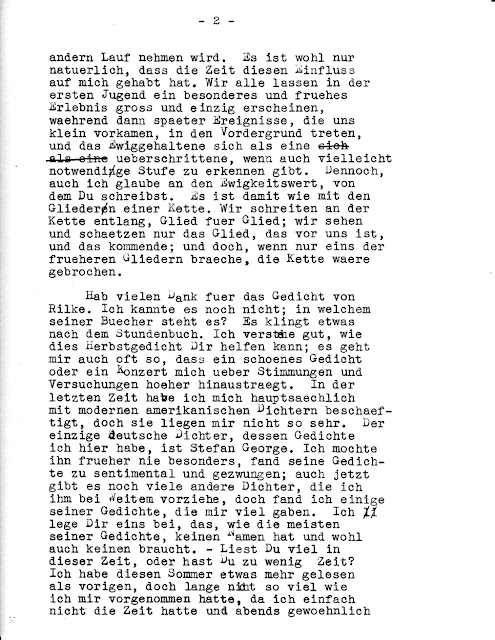 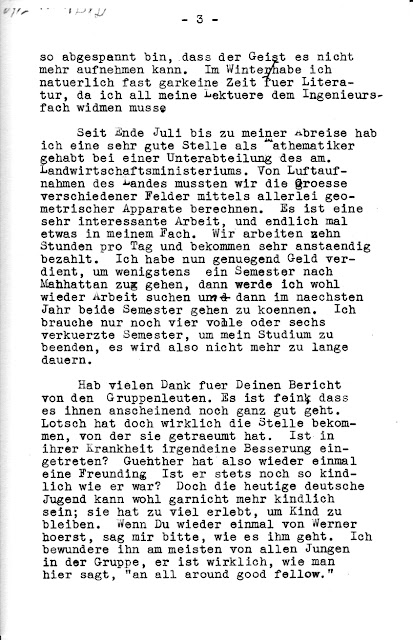 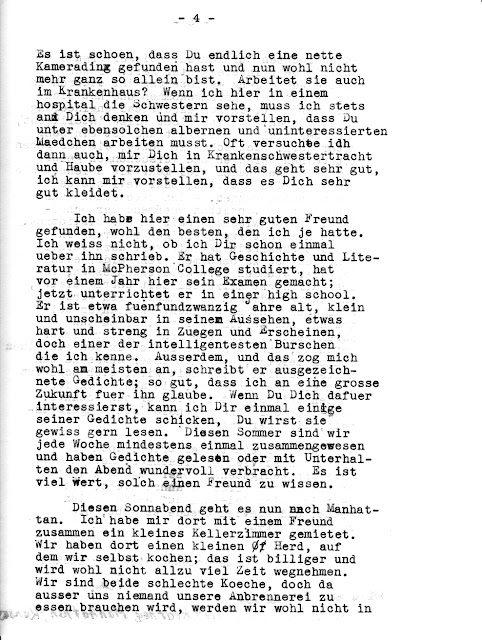 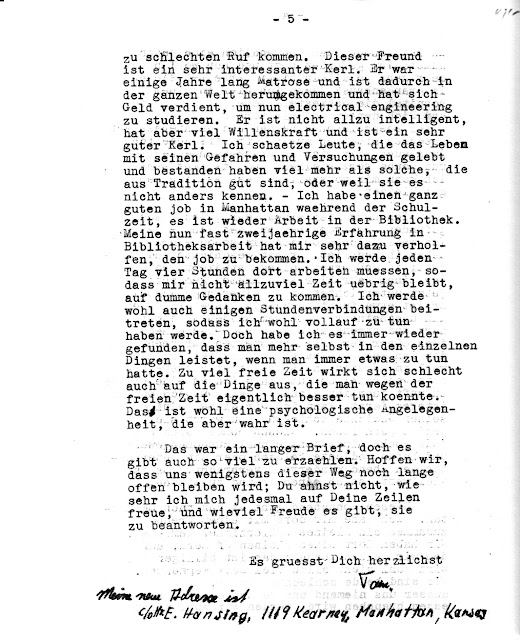 "We were born into a generation that demands a lot from us." This is perhaps the understatement of Opa's life. He is pretty poetic in his letter to his friend Gisela, with whom he has a close friendship. He focuses on their platonic relationship, but seems to hint at flirtation whenever he gets a chance. (Like commenting on how nice she must look in a nurse's uniform.)

Opa's opening paragraph hints at the inevitability of the US' involvement in the raging war. He feels a sense of superiority? prescience? as he glances around at what he considers to be his somewhat ignorant comrades at school. Little do they know, he thinks, that war is coming. I think they might know, they just might not know to what degree it will affect them. But can anyone know the future? The war is an old story for Opa, but he's a little condescending to his American friends. I can't fault him for it, he is right in a way, very soon the entire nation will be invested in this world war in ways they would not imagine. I think Opa honestly feels a little bit of what they call "survivor's guilt" by living in the relative safety of middle America while his friends are literally in the crossfires of conflict.

Opa's optimism for the demands that the world has put on his generation is that they will get through it together. I love this.

Opa talks about Anni. It sounds like Anni might have said something nasty about her sister Gisela or at least not helpful. That sounds about right. And smartly, Opa doesn't let Anni affect his friendship with Gisela. He acknowledges that he's glad to be back in touch with Anni, but that he no longer feels the same way about Anni (he was in love with her), and that passing time has made that First Love feel less important. I love his chain link image- that we go along in life feeling that the link in front of us is most important, and then as we pass over them they fade, but to break it is to break the chain. It's a nice way to capture that no experience is wasted, but that it becomes less pressing. I wonder if he came up with that himself.

Then Opa talks about poetry, and I think he's putting on a little bit of a show for Gisela, but I don't doubt he loves poetry. Here is the Rilke poem, Fall (a translation):

It's a beautiful poem, with the last stanza offering hope to us in the Falling. Opa talks about his new best friend, a person that we think is Winton Sheffield. Winton is older, a bit wiser, and a gifted poet it seems. It makes me happy to think that Opa has finally found a person that he can be real with and share his thoughts with.

Opa hears from Gisela the scoop on everyone from the group. Lotsch is the girl they called Lotte (short for Charlotte) who had some form of disability, perhaps a weakness in the limbs of some sort. In most pictures, she has crutches or is being carted around on their hikes in a wheelbarrow. I love that they had someone among their group who was not physically as robust as they were, and they managed to find a way for her to be integrated into their activities.

I emailed Bern (another Quaker group alumni) to ask him about what happened to Werner and other folks in the group. I don't know Guenther, but Bern knew him: "Guenther Gaulke who, after the war, married a Bremen girl and became a Bremen policeman." Bern visited him a few times after the war.

Werner's is a sad story. This is the boy that Opa has high respect for, he was the same age, maybe a year older. You might recall me saying the line that "Gisela loved Tom, Tom loved Anni, Anni loved Werner, who fell in the war." I asked Bern if this was the same Werner. It is. Here is what he wrote about him:

Werner Saxe (Sachse?) who fell on the eastern front... I did Ask Anni about detals of his death but other than that he fell with a Straf Batallion, a punishment military unit, she either didn't know or didn't want to tell me. ...(we have a copy of) his father's last letter before his execution in Ploetzensee, Berlin... As I recall it, I think Anni told me that Werner did not want to marry while the war was on. Perhaps he was aware even then that he would not survive.  She also told me that he loved his violin.

So Anni's love died, unmarked, on the Eastern front in a punishment military unit. I'm assuming (but don't have a paper trail to confirm) that his placement in this unit was a result of his being half-Jewish, which enabled him to be sort of what we might called cannon fodder- front line folks that Germany didn't mind sacrificing. This was the very type of assignment that Opa was escaping when he left Germany. This was the death that very possibly awaited him if he remained in his home country.

But Opa doesn't know all of this, as it all hasn't happened yet. But I doubt we'll hear about Werner in the letters much again. Opa's focus then switches to Gisela in a nurse's uniform. Because, she's his friend. Right? What a flirt.

He talks about his new best friend, his move to University of Kansas, his old job doing cool engineering things (first I've heard of this!), his job at the library, etc. He catches Gisela up on all the details of his life. His letters must give her a joint feeling of gladness that normalcy exists somewhere, and sadness that her life has been sort of usurped by the war at hand. She continues with everyday living, but everything is shaped by the war.

So Opa continues to write, to speak hope, to work hard, to keep himself busy, "so I won’t have too much time left over to think stupid thoughts."

No one can rest too long, because they were born into a generation that demands a lot.
Posted by Sarah Snow at Thursday, March 16, 2017