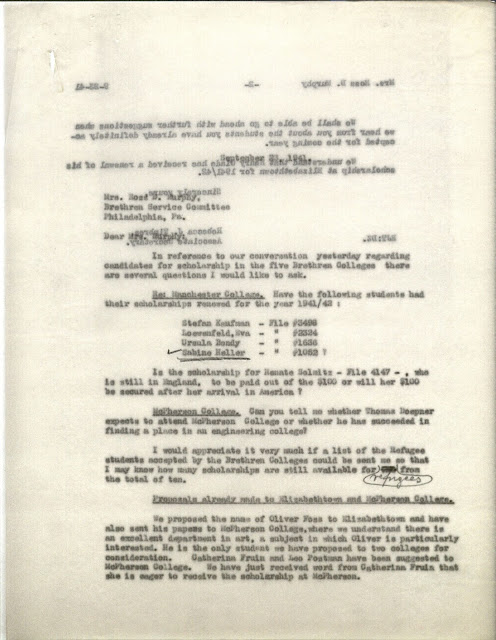 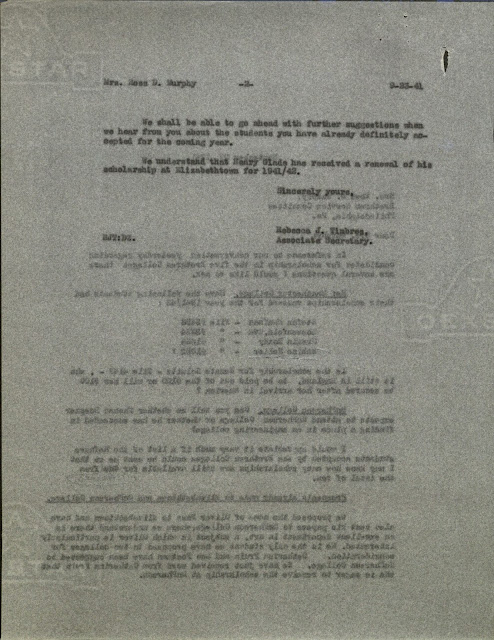 Letter from Rebecca J. Timbres (I think of AFSC) to Brethren Service Committee

In reference to our conversation yesterday regarding candidates for scholarship in the five Brethren Colleges there are several questions I would like to ask.

Re: Manchester College. Have the following students had their scholarships renewed for the year 194142:

I would appreciate it very much if a list of the Refugee students accepted by the Brethren Colleges be sent me so that I may know how many scholarships are still available for refugees from the total of ten.

Proposals already made to Elizabethtown and McPherson College.

We proposed the name of Oliver Foss to Elizabethtown and have also sent his papers to McPherson College, where we understand there is an excellent department in art, a subject which Oliver is particularly interested. He is the only student we have proposed to two colleges for consideration. Catherina Fruin and Leo Postman have been suggested to McPherson College. We have just received word from Catherina Frun that she is eager to receive the scholarship at McPherson.

We shall be able to go ahead with further suggestions when we hear from you about the  students you already definitely accepted for the coming year.

We understand that Henry Glade has received a renewal of his scholarship at Elizabethtown for 1941/42. 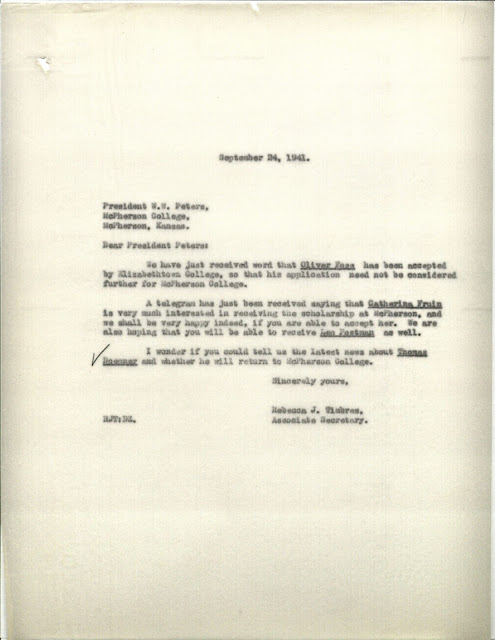 We have just received word that Oliver Foss has been accepted by Elizabethtown College, so that his application need not to be considered further for McPherson College.

A telegram has just been received saying that Catherina Fruin is very much interested in receiving the scholarship at McPherson, and we shall be very happy indeed, if you are able to accept her. We  are also hoping that you will be able to receive Leo Postman as well.

I wonder if you could tell us the latest new about Thomas Doeppner and whether he will return to McPherson College. 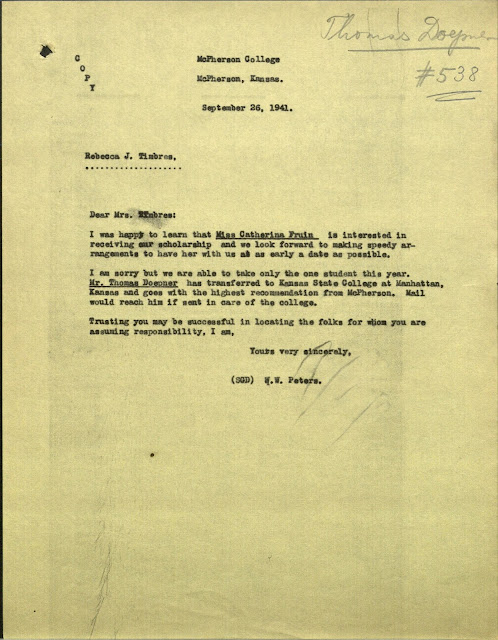 I was happy to learn that Miss Catherina Fruin is interested in receiving our scholarship and we look forward to making speedy arrangements to have her with us at as early a date as possible.

I am sorry but we are able to take only one student this year. Mr. Thomas Doeppner has transferred to Kansas State College at Manhattan, Kansas and goes with the highest recommendation from McPherson. Mail would reach him if sent in care of the college.

Trusting you may be successful in locating the folks for whom you are assuming responsibility, I am,

This series of letters isn't completely isolated to Opa's story, but I think it is important for the larger story. It shows us that the AFSC is in constant communication and cooperation with other service groups and colleges in their effort to place, and support refugees. This particular letter chain is in connection with refugee students who have been accepted and received scholarships from colleges associated with the Church of the Brethren. McPherson is one of those schools.

Rebecca Timbres (a new name for us) is following up on many students, making sure no one falls through the cracks and confirming that she knows where everyone is and if they are all still receiving needed support. In particular, her correspondence with McPherson is to confirm if Opa has indeed transferred, and if McPherson would be willing to take on two new students this year.

The new President of McPherson writes back to affirm one student's acceptance and scholarship, he's sad to confirm that they cannot accept the second student. He then tells Timbres that Opa has transferred with the highest recommendation from McPherson.

A few things occurred to me: Opa has set the stage in McPherson for them to embrace and welcome refugee students to their campus. I'm not sure if he was aware of that, but his positive involvement on the campus likely paved the way for several other students through the years to have the same opportunity he had. If he had been in any way ungrateful or even uninvolved, McPherson might not have been so eager to bring another student.

That reminds me that our decisions not only affect ourselves and those close to us, but could have a lasting affect in other places we may not even realize. I'm grateful for Opa's positive reputation.

I'm sad about the kid that didn't get in to McPherson. I wonder where he was and if he got another school to accept him. At this point, most of the refugee students were already out of Europe and sort of in waiting to go to school or receive support. I appreciate that the AFSC was not an agency that placed people and then dropped them. They followed them as long as they needed the support. That likely saved many of them from falling through the cracks of immigration, not getting financial support, and otherwise becoming a sad statistic.

Opa has moved on, and left a positive legacy and open possibilities for those who follow in his path.